So it seems that there is still an insatiable appetite for superhero films, or so Disney would have us believe. Since acquiring Marvel, the house of mouse has been super keen to push its characters onto big screens and small, with slightly minor characters getting their own shows to shine, with the likes of Loki, Hawkeye, The Falcon and the Winter Soldier and WandaVision.

With the Avengers undeniably being the sexy, hip superhero team that has successfully dominated our screens for the last decade or so, there’s been little room for any other teams to get a look in at saving the world and that. Even Marvel’s X-Men, although successful, have always fought in the looming shadow of the Avengers, which is no surprise when you consider that they have household names like Iron Man, Spider-Man, Hulk etc in their ranks.

There’s a certain bravery then, or cocky Disney arrogance, introducing a relatively unknown team of superheroes to the world, but do they have what it takes to make a name for themselves in an ever-growing superhero arena? 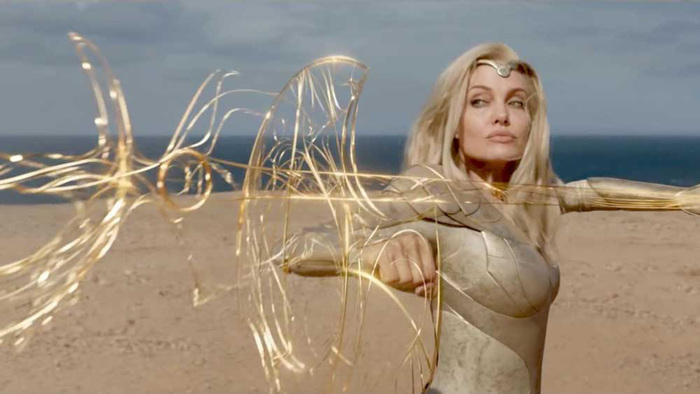 With fewer jobs around, Angelina retrained making name trinkets for tourists on her local beach.

5000 BC and Planet Earth as we know it is under threat from an alien race known as Deviants. As their name suggests, they’re not the type to sit around and attempt to come to some amicable agreement, they want to exterminate the human race.

Sensing that it could kick off big time on Earth, Celestial Arishem (David Kaye) decides that humans could do with a hand, so sends ten of his best Eternals – super-powered immortal beings – to the rescue.

And that’s exactly what the likes of Sersi (Gemma Chan), Ikaris (Richard Madden) and Sprite (Lia McHugh) and the rest of the Eternals do, until all the Deviants are dealt with.

All is well for the next 7000 years, as the team go their separate ways and have lives of their own, living amongst humans. But when a Deviant appears in London and causes a fair amount of mayhem, Sersi suspects that there’s something amiss and that its time for the Eternals to re-unite and get on top of the situation.

As they re-connect once again, they learn that everything isn’t quite as it appears, or more to the point, that everything they’ve been lead to believe all these years isn’t exactly true, which causes the team to revaluate their purpose, as the world comes under threat once more.

So according to my app, the next safehouse for lost actors is just over the next sand dune.

Let’s face it, the Avengers was always going to be a tough act to follow. Even tougher with an unknown quantity such as the Eternals. Jack Kirby created these celestial superheroes, who first appeared in print in 1976. They would then make sporadic appearances throughout the years, which included a miniseries in 2006 by Neil Gaiman. This gives you an indication that the series wasn’t one for mass consumption; the characters were best suited to the more mature, graphic novel market, which is thankfully, just how director Chloé Zhao pitches her film.

Sure it’s a film featuring superheroes that use powers against evil, but it’s deeper than that. This is a film rich in comic book lore, that is far from black and white. Characters have moral issues that they are confronted with, as well as struggles with identity, making for a surprisingly deep tapestry.

On top of that it’s also an origins story, so there’s a lot to cram in and develop. It could have got messy, but Zhao shows a mastery of her craft, belying her relative inexperience despite her Oscar win. This has been only her fourth film directing, with the other three all being low budget indie projects, that were nothing near on the same scale as this. It’s a project that could have easily overwhelmed her, but she does an admirable job in not only introducing a new bunch of heroes, but also embroiling them in a meaningful story.

Externals then, is not a light-hearted popcorn superhero flick like the recent Spider-Man films. It is a film that will no doubt be appreciated by a slighter older demographic; the likes of whom enjoyed the fluffy antics of Iron Man and the like, but also went on to appreciate the more cerebral adventures of someone like the Silver Surfer.

To that end, Externals is the most ambitious entry in the MCU to date. It has the battles that everyone enjoys, but it also sees characters struggle with mental anguish as they are confronted with what their real purpose on Earth was supposed to be. It’s the kind of dilemma that a superhero would normally face a few features down the line, certainly not from the off in issue one.

It’s this depth of story and character that makes the film a surprisingly mature affair, with an impressive balance of being thought provoking as well as action-packed.

Considering how well known many of Marvel’s established characters are, there’s no harder task than introducing a new team of unsung heroes into the mix, and yet Zhao has done it.

The film may have come under more criticism than your average Marvel superhero flick, but that’s understandable, as there’s nothing average about it. Hopefully the fact that it doubled its $200 million budget at the box office means that more Eternals are on the way; let’s just hope it’s not too long a wait for them.