It’s not clear which is more puzzling, that It’s taken forty years for an actual direct sequel to John Carpenter’s classic 1978 horror to emerge from the darkness, or that it took a couple of jokers to do it. No, seriously.

Falling heavily into the strange-but-true category, this film is brought to you by none other than TV’s Kenny Powers – AKA Danny McBride - and his producing/directing buddy David Gordon Green.

But despite their comic pedigree, this latest outing for Michael Myers is no joke, as he slips back on his mask to embark on his unique take on trick or treating. 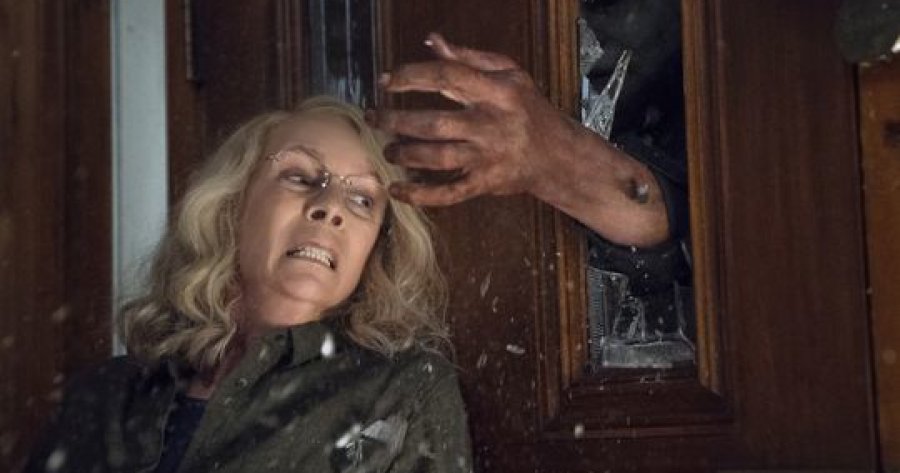 I've told you already, we already have Sky tv!!!

To tie in with the atrocities that took place forty years ago by serial murderer Michael Myers (James Jude Courtney) has some visitors to his sanatorium; two British journalists, who would like to mark this macabre anniversary with a podcast. They need to be quick however, as Myers is being transferred to another facility.

During transportation, the vehicle that Myers and a number of other loons are on, crashes. Myers escapes, and quickly returns to his murderous ways. The date of his escape? 31st October. Otherwise known as...Halloween.

This news is not altogether surprising for Laura Strode (Jamie Lee Curtis); as the one surviving victim of Myer’s original attacks on the town, she has been vigilantly preparing not on herself, but her daughter Karen (Judy Greer), for this eventuality.

But being Halloween, the town is all dressed up for the ghoulish occasion, with the local high school even throwing a dance, with Laura’s granddaughter Allyson (Andi Matichak) attending with her boyfriend.

With the town in such a festive mood, what better time for an old resident to make a surprise appearance. It's alright Frank I'll look after you. They're the monsters.

Although this is touted as a direct sequel to the events of the 1978 original, there has of course been a number of Halloween films since – nine to be precise. The key thing to remember however, is that Carpenter didn’t direct any of them. And although he didn’t helm this latest, he did give his input. However, He just may not have given enough.

Green’s version clearly respects the original, and that’s possibly part of the problem, as it does so with a little too much reverence.

And although a direct sequel, it often feels like a re-boot of the original. It’s set in the same town, where a murderous character escapes the loony bin, only to terrorise a small town – including a babysitter – on Halloween. Now, haven’t we seen something like that before?...

To its credit, it does see the return of Curtis, but her contribution is troublingly predictable, as she sets out to protect her exposed family. It also features the original Myers, played by Nick Castle, but only briefly for a cameo, which is understandable for a 71-year-old.

In fairness to Green and McBride, The Halloween franchise is to all intent and purposes, a one trick pony. There’s only so much you can do with a mask-wearing, murdering mute, and on this evidence, it’s all been done.

This sequel then is little more than a trip down memory lane, albeit on Halloween. It lacks the genuine thrills of Carpenter’s original, and is less slasher and more re-hasher. If you have a peculiar fondness for Michael Myers then knock yourself out, but if you’re after a serious dose of cinematic horror, this isn’t the ‘holiday’ for you.