It must be a little hard being Keanu Reeves. Sure, it’s difficult to feel sorry for anyone who starred in films such as Speed, The Matrix trilogy as well as playing Ted in those excellent adventures.

But for every enjoyable flick he’s ever made, he’s appeared in a larger number of dreadful dross to match. And, yes, that also includes this sci-fi silliness, sadly.

Nope, even with the protective visor down I can still read the bad reviews.

Working hard in a science lab in Puerto Rico is Will Foster (Reeves). He decides to take a welcome break however, and sets off for the weekend boating with his wife Mona (Alice Eve) and their three children. But during a terrible storm, with visibility on the road poor, their car ends up crashing. The good news is that Will survives, the bad, is that his entire family are wiped out.

This would be devastating news to anyone other than Will; it just so happens that the area of science he works in is that of cloning and replicants. With his unique skill set, he could conceivably do the impossible – bring his family back from the dead. 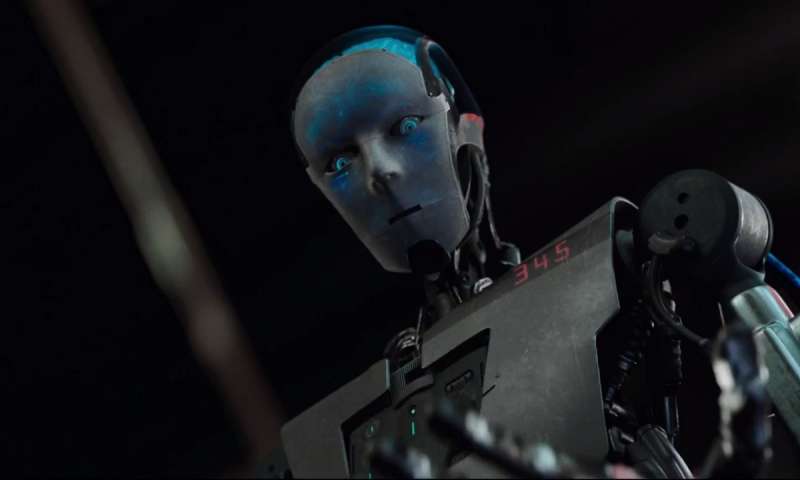 Keanu's stand-in is so life-like, the crew struggle to tell the two apart.

If you were to be kind – well , it is Keanu after all – this could be described as a modern take on Frankenstein and his monster, but with Doc Keanu making not just one, but an entire family of monsters.

But let’s face it, there’s no room for kindness in this troubled world of ours. There may well be an interesting germ of an idea in here, somewhere, but its execution is completely derisible.

Even if you were to brush over the fact that out of a tragic car crash, Keanu’s character not only survived but walked away unscathed, there’s just more ridiculous notions to come.

For example; when Will is knocking up his new family in the basement, he pretends to be them on social media so that their friends don’t get suspicious. With everything else going on, it’s a little hard to swallow that posting on Twitter would be a priority.

And then there’s the tech-heavy story. You would think that bringing back your dead family would be enough for an audience to accept, but not so here. Director Jeffrey Nachmanoff also has to include a subplot of Will and his team also creating robots that can have the contents of a human’s brain downloaded onto its hard drive, allowing that person to live on in an android’s body.

It is clearly taking on too much, and really needed to have focused on one or the other. Not that it would have improved that much if it did.

Reeves plays a familiar version of himself, one that is eerily similar to an android that has had some human elements downloaded, but only the lite version without emotions installed.

There is some light relief throughout, however none is intentional. The plot and dialogue are so utterly poor that it will trigger the kind of laughter usually reserved for the company of old, racist relatives.

It’s certainly a missed opportunity as far as humour is concerned when you consider Reeves’ on-screen scientist sidekick is Thomas Middleditch from TV’s Silicon Valley. But much like Reeves himself, his presence is woefully underwhelming.

It’s not all bad news for Reeves’ fans. First, they’re used to him appearing in these straight-to-DVD quality titles. And secondly, he will be returning shortly in fan favourites as John Wick and Ted Logan. Let’s just keep our fingers crossed that neither are as bogus as this.