To say that machines will eventually take over the world sounds almost like a statement that doesn’t fully understand the concept; after all, machines in general and technology specifically have already taken over the world.

These days we rely so heavily on tech, that it would almost be too difficult to imagine a world without it. Can you imagine, for instance, if you couldn’t refer to a dedicated weather app to find out what it was like out, instead having to actually look outside? It almost doesn’t bare thinking about.

Or the idea of no longer having a virtual assistant at your beck and call 24/7, to give you a recipe for lasagne, or turn the living room light on without actually getting up.

This latest animation acknowledges the need we have for tech in our lives, but also asks the pertinent question: what happens when tech goes bad? 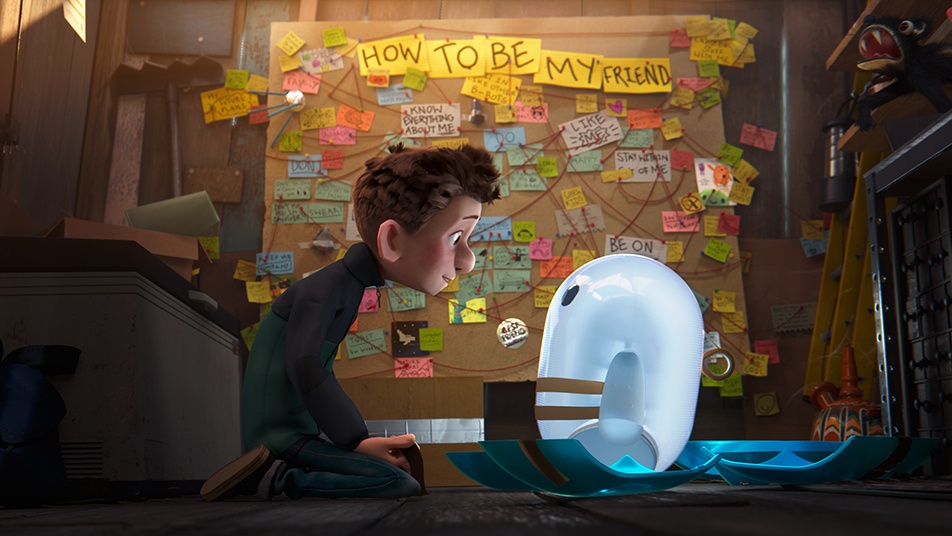 I mean the scary wall chart is great and all but there is an app for that.

Everyone who attends the local school in Nonsuch is lucky enough to have the latest must have gadget, the B-Bot from Bubble. These bots quickly learn everything about their new owners and have access to all their social media feeds, making them even more popular than they are, with friends left, right and centre.

Except one. Barney (Jack Dylan Grazer) isn’t lucky enough to have a B—Bot as yet, and he may be the last kid at school not to have one. He’s hoping this will change however, as it’s his birthday, and it would make the perfect gift.

He’s disappointed when he doesn’t get one, which makes his dad feel bad, so much so that he tries to pick one up. The thing is, these Bots are incredibly popular, with a huge waiting list for them. He does manage to pick one up from a worker though, one that has taken a few knocks and was about to be sent back, but was his for the right price.

Barney is of course delighted, but less so when he discovers that his unit isn’t like all the others. His unit can’t access the Bubble main frame and therefore update its software, so can’t behave like all the other bots. Although initially disappointed, Barney quickly learns that having a unique robot friend is priceless. 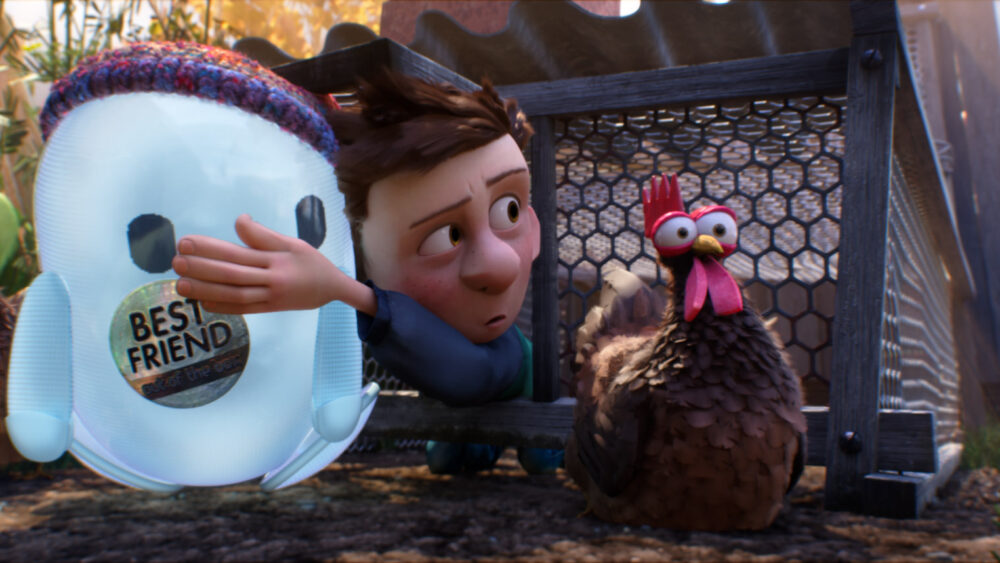 Trust me, you don't want to sniff that chicken's butt.

It seems that a lot of animated production companies are trying to come at material from a unique angle; certainly films like Inside Out and Soul deal with more mature themes than can be often be found in animated features.

This one from 20th Century Animation explores the themes of social media and its importance to the youth market. And yes, it’s very important to them, apparently. However, although the film highlights how social media can take over your life, it never really offers an alternative; no doubt the 20th Century media company have their grubby fingers all over it.

Ron, the b-bot that Barney ends up with, is a cross between an anaemic R2-D2 and a Tamagochi. And despite being voiced by Zach Galifianakis, who has the perfect quirky comedy for animation, its personality is disappointingly bland. There was an opportunity to have a lot of fun with a rogue robot, but the film just doesn’t take advantage of it.

Sure, he and Barney have a few fun adventures, but the film doesn’t like to go off message too often, which is social media can be a lot of fun, but it’s good to have some real friends too. It’s all a little too cheesy in places, and comes off somewhat as an overlong public announcement film.

Still, the animation is bright and breezy, and a younger audience will probably enjoy it as you scroll up and down your media feed.