Bruce Lee, Jackie Chan, Jet Li, Jean-Claude Van Damme, Michelangelo, Donatello, Raphael and Leonardo: just a handful of names of some of the most famous exponents of martial arts in popular culture.

It’s not just about hitting stuff, it’s about doing it with style, preferably in slow motion.

This new game pays its respect twofold – to the arcade brawlers of old, and to traditional fighting practices in ancient China. 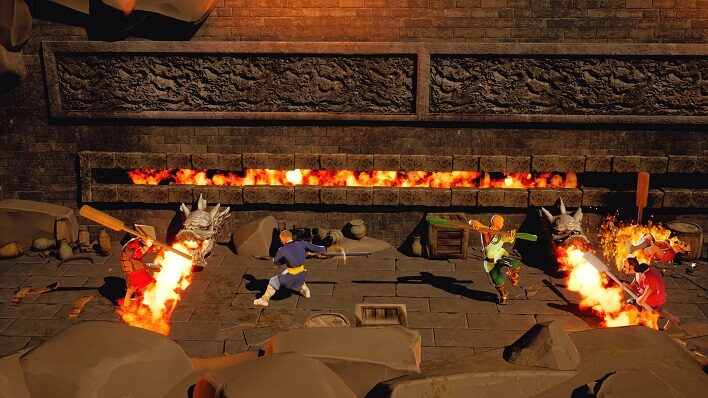 This lock-in is starting to get real toasty...

You play a fisherman, Wei Cheng, whose parents were killed by the Wokou, and so was raised by his grandfather, who taught him how to fight. His fighting skills weren’t enough however, when the Wokou return years later and destroy their village, with Wei Cheng being rescued by monks.

He soon finds himself in their home, the South Shaolin temple, where they appreciate he has some raw talent when it comes to fighting, but has some way to go. Luckily, they decided to train him, put him through his paces, taking his fighting prowess to a whole new level. And he’s going to need it if he’s to confront the clans that stand in his way of getting the justice he demands.

As you would expect from a game rooted in traditional fighting styles, you will have to learn to become disciplined playing it.

Although initially it gives the impression that you can button mash your way to victory, like so many classic fighting games of the past, but that will only get you so far here. A very short distance in fact.

To progress deep into this game you must observe and study your foe, with each one having its own unique style, which you must learn to overcome. Then, and only then, might you have a fighting chance of surviving. 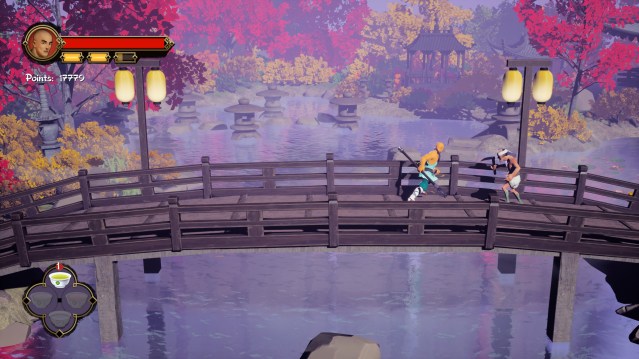 Jeez, you can see im running here, can't you just move one step outta the way?!!!

The first thing you will learn remarkably quickly however, is that the game is no pushover. Even from the very start there’s a sense that you have find your feet in the game sooner rather than later, otherwise there’s every chance of being overwhelmed by the experience. Developers Sobaka Studio are well aware of this fact, hell, they might even be proud of it, as they remind you throughout on loading screens that if you find a section difficult, you can always lower the difficulty setting, and then raise it again at a later date. By doing this, they’re essentially saying that they’re not going to make the experience an easy one.

One of the ways they do this is by drip-feeding you abilities, with two of them being open to you only after you have completed the first couple of chapters. And these abilities would certainly be useful from the off, but no, you’ll have to work for them. Earn them.

Although the game is best described as a side-scrawling fighter, you can actually fight your opponents above and below you, as well as to the left and right of you. The only real issue with this is that the actual fighting area is relatively small, with a lot of the screen devoted to the location. This means that there are times when you may feel trapped, being swarmed by enemies, and just not having enough space to relocate and start your attack from another approach.

And despite the look of the game, which is visually impressive, the idea of concentrating all the action into the centre strip of the screen, only adds to the linear feel from playing.

Another slight issue is the upgrade tree. You get rewarded for every successful section you clear, which allows you to upgrade your abilities. So far, so good. Unfortunately the system lacks clarity, and you lose sense of what is essential to upgrade, and what isn’t. You could then just end up blindly upgrading anything and everything, in the hope of literally striking it lucky. This wouldn’t be that big an issue if you didn’t rely on your fighting abilities to get you out of trouble, which you do constantly. A helping hand at this stage would have been most useful indeed.

That said, you are aided with tea, which can be found by breaking crates along the way, which will improve your health bar, and therefore you will be drinking quite a lot of it.

When you find your fighting groove however, and it will come, it’s truly satisfying to see your enemies flying through the air, after delivering a satisfying combo. And the deeper you go, the less you rely on standard fighting moves, when you have the ability to unload with a selection of powerful moves.

Some may get slightly blinded by the number of button combos available, with the shoulder buttons being used in conjunction with the face buttons, so that it occasionally feels like your fingers are doing their own assault course.

Sadly, there’s no regular save function, so when you’re facing a boss level in particular, you’re given only two options: either start again from the beginning of the boss fight, or return to the temple, where you would eventually have to play through that level again to get to the same point. It’s certainly not ideal, especially when just getting to the boss may have worn your fingers to the bone as it is, but again, it’s just something you need to prepare yourself for.

9 Monkeys of Shaolin is unlikely to win you over instantly. It won’t necessarily offer immediate gaming gratification, instead opting for the player to learn, often through mistakes, building up a slight tolerance to having the crap beaten out of them. In that sense it’s akin to The Karate Kid of gaming, with more of a wax-on, wax off philosophy as opposed to all fists blazing.

It may have its origins in classic side-on scrolling beat ‘em ups, but 9 Monkeys of Shaolin is a more sophisticated, nuanced example of the genre. By all means go in throwing yourself around like a kung-fu heavy, but that isn’t necessarily the best way forward. With patience and discipline comes its own rewards, the kind of which may just make the Shaolin monks proud.