There are plenty of ways to get exercise these days; unfortunately sitting at a desk and tapping a keyboard isnt one of them. So when EAs Sports Active landed on my desk, I thought it might be just the thing to defeat my mushroom top  the male equivalent to a womans muffin top; its a lot greyer with the possibility of all manner of things growing in its dark folds.

After much sweating and exertion, I managed to track down the whereabouts of the Wii board. It was under the cat. Not that the cat is that big that she covers the entire board  if that were the case, I would be getting her to do this review instead of my good self  but her moulting had managed to camouflage it like some cat pillow. The use of the board isnt essential, but lets face it, any excuse to use it must be a good thing.

Out of the box comes a thick strap that you fasten around your right leg, which occasionally houses the nunchuk for certain routines. Theres also what appears to be the largest elastic band in the world, which you attach handles to at either end. Oh and the disc for your Wii. Now then, lets get ready to rumble. 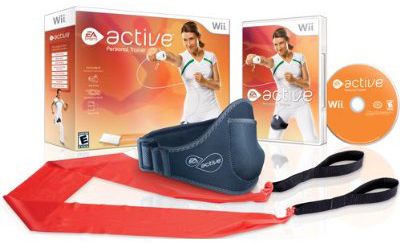 You first have to create a fitness profile, where you give your age, height, weight and gender. Then you do a bit of dabbling with your avatar, which can include a few outfit changes as well as, quite oddly, deciding if you want to wear sunglasses or not.

You then get to select either a male or female trainer. I opted for the male, as he resembled Barack Obama; the thinking was, if anyone was going to get me fit, it might as well be the president of the good old USA.

Then you have to select the intensity of the workout you want, either low, medium or high. I plumped for medium, just to be on the safe side. You can then decide if you want to include the balance board into your work out, if you have one, but like we said, its not essential. And sadly, you can do a few days worth of workouts without ever actually using it.

Finally, before you jump in, you can choose the style of music you want to work out to; theres quite a mix, including hip-hop & urban, electronic and modern beats. The thing is though, its difficult to really tell any of them apart, as theyre all played by what seems some kind of tribute band (and by band I mean a bloke with a keyboard) without any vocalists.

So, with the 30-day challenge, you have a mix of different exercises every day, which either give you an overall work out, or focus on one particular part of your body. Youre even given a list of that days programme, which also gives you the ability to opt out if you so wish. I chose to leave out the running exercises, as i run every day in the real world. I also declined the kick up exercises; despite my every effort to do the damn things right, my actions never registered with my trainer. So, as I also looked like some kind of Britains Got Talent reject who performed the worlds worst solo can-can dance, giving it a miss was no real loss.

The first thing that gets you, once youve got your leg strap on, is to manoeuvre through various stages of equipment swapping. The wiimote needs to be always connected to the nunchuk, which means you have the cord connecting them flapping about all over the place. Mine occasionally got attached to my leg strap, which was only mildly annoying. I then had to put them to one side, and then pick up the elastic band for a set of exercises, before swapping over again. Its a little awkward to begin with, but you do get used to it.

Using the elastic band certainly takes some getting use to on its own however. I had to cheat one of the exercises, due to the fact that the band would have snapped if I attempted to stretch it over my head on a regular basis. Im not overly tall at six foot either, but at the end of the day, it is only an elastic band. If it does break though, never fear, as you can get rolls of the stuff from most sports shops. The only problem I encountered was when the handle pinged and the elastic slipped off of the end of it occasionally mid exercise; despite being caught by surprise by this, it was easily remedied by tying it back on.

Now, having been to gyms before and used proper weights (ok not the really heavy ones, but you know, heavy-ish), I was surprised to feel one or two aches and pains a few days in using the band. You dont really imagine the tension it creates to be that beneficial, but the aches certainly let you know that it does work.

The same can be said for many of the other exercises too  the more innocuous looking the exercise, the greater the chances are of you waking up and discovering an ache on a part of your body that you didnt realise could ache.

The great thing about the 30-day challenge was that I wasnt entirely sure what exercises i was in for from one day to the next. Every so often a new one would be added, or even better, one of the fun game-like exercises. The boxing sections were truly enjoyable (simply punching targets plus some bag training), especially if, like me, you hum the Rocky soundtrack in your head whilst doing it. The other more fun activities included the tennis, softball, volleyball and basketball games. 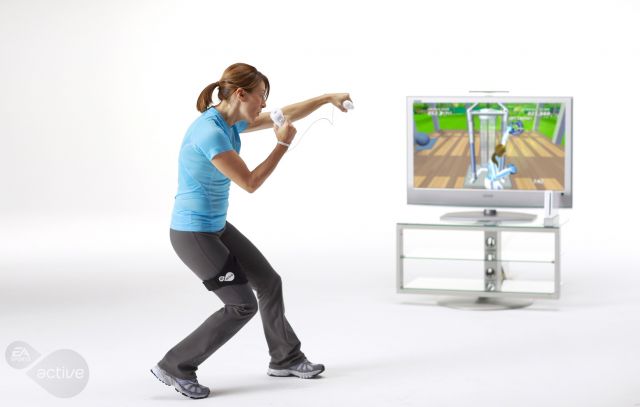 Each workout lasted around 20 minutes or so  it would certainly be longer with the running left in  which is a doable amount on a regular basis; they even suggest you have rest days, so you dont have to do it seven days a week either. I have to admit I never got on with Wii Fit. The games were never that much fun, and I have just about the same level of enthusiasm for yoga as I do for having all my limbs sawn off with a dull kitchen knife.

EA Active however, actually made me think I was getting fitter. At the end of the month, I didnt exactly lose my weight in bags of sugar  possibly a few largish sugar cubes, but i felt remarkably healthier. My mushroom top also appeared to have shrunk a bit, which was also a bonus. Well, to me it did, if no one else.

The only real problem is that theres no way of monitoring if its actually doing you any good or not. At the end of the 30 day programme I was kind of expecting a big reveal, maybe with some balloons, declaring the amount of weight I had lost. Instead, I got what felt like a limp pat on the back. Obviously its difficult to tell how much weight you have lost if you dont have a Wii board, but if youve already told the programme you have one, surely it wouldnt have been that big a stretch to include those kind of results at the end? It can be argued that its primarily to help you get fit, but lets face it, thats rubbish  if you jump up and down for half an hour a day like a loon, youd like to be told at the end it that it was all for something.

Considering the obscene amount it costs to join gyms however, as well as the very few times most people go once theyve signed up, EA Active is the perfectly affordable first step on the road to a fitter you. They can even use that line in the ads if they like.

And the fact that it has a really varied mix of serious types of exercise, as well as a bunch of fun ones to, means that it will take some doing to get bored with its regime.

Some might think it goes against the ethos of being a video gamer  its almost a prerequisite that you also have to be a couch potato. But if you can fool people into thinking theyre having fun, while all along theres a chance that their slightly obese frames may be benefiting from some covert forms of exercise at the same time, then whats the harm in that? Besides, whats not to love about playing with a giant elastic band?