Utawarerumono: Prelude to the Fallen

Japan has always been an intriguing culture to the West, but none so more than now, it appears. You can’t watch TV (or other device, for that matter), without another curious TV presenter exploring the country, travelling on the Bullet train, ordering noodles from a robot, and sleeping in an oversized locker for the night.

Yes, Japan is a most curious country indeed, and their quirkiness certainly extends to their video games. A very good case in point is the Utawarerumono series. They are less game and more picture book, which certainly ties in with the Manga comics and Anime show that the franchise also spawned.

This latest episode acts as an origins tale, as it reveals the roots of the story.

I told you all that my new floor covering would take some getting used to, so put the weapons down OK!

A man wakes up in a small village, having no memory of who he is, or how he got there. He’s even wearing a mask on his face that refuses to come off. A young girl Eruruu is looking after him, along with her little sister and their grandmother, who give him the name Hakuowlo.

As they help him regain his health, he decides to help them out with their land, which is struggling to grow essential crops. It’s just as well that he’s recovering physically, as he soon has to learn to protect the small village from all manner of foes, which are keen to take what little they have.

To say that this is a niche title is an understatement. Casual gamers certainly won’t be able to get their heads around it.

For starters, there are more dialogue boxes than there are stars in the night sky. It is incredibly dense. We played for over an hour and a half, presented with nothing but cut scenes for that entire time. Thankfully there is an auto facility that literally turns the experience into an e-comic. After this period, we had to check the trailer out, to see if there was actually a game to play, which the trailer led us to believe there was. And sure enough, some combat finally arrived. 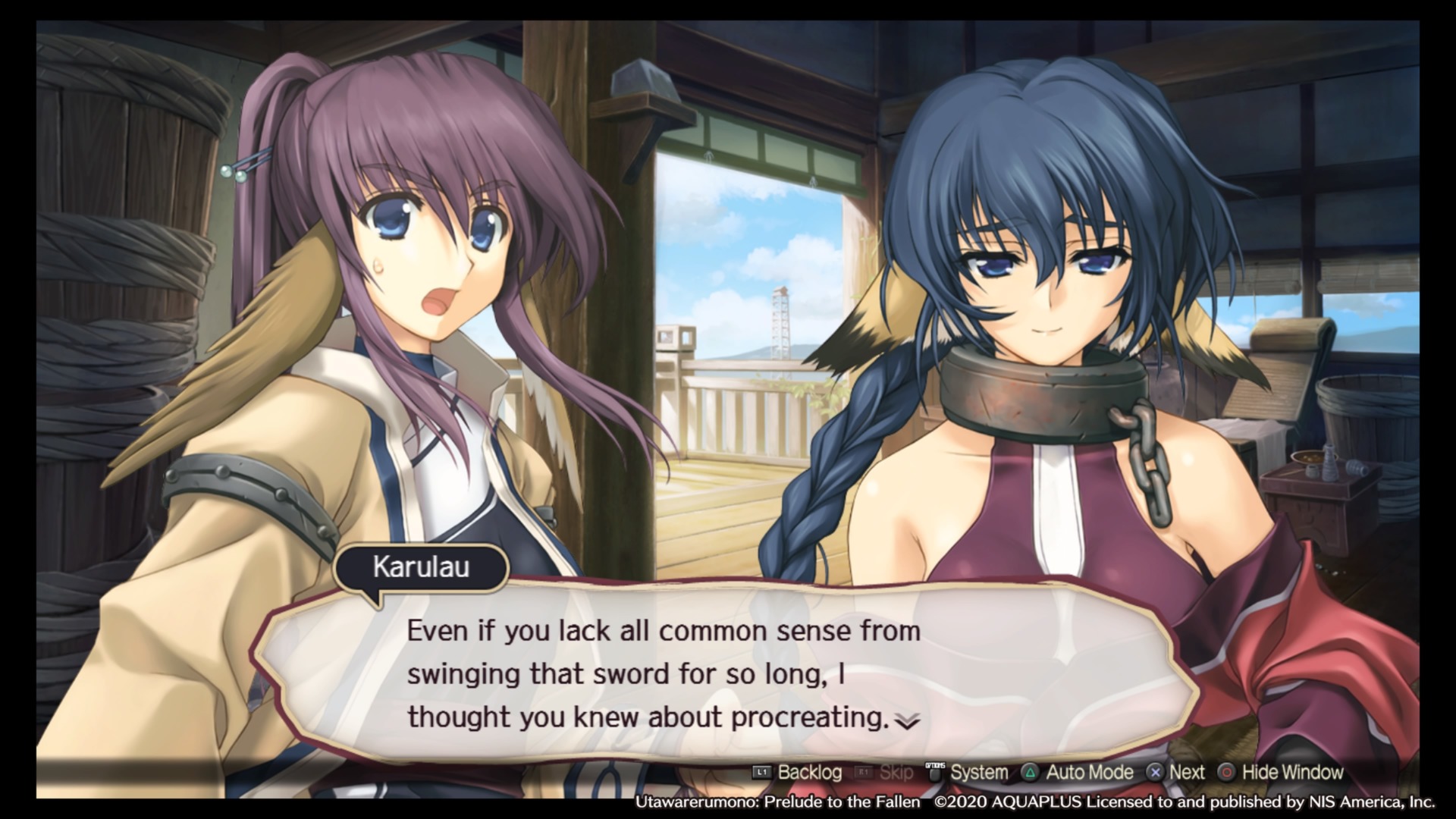 I thought someone said there'd be doughnuts at this meeting...

With the main character presenting a bladed fan as a weapon, it started to look quite promising. But we were soon deflated with a dated, turn-based RPG system. We were confronted by some disagreeable apes, but with our small party, we quickly saw them off.

With the game finally here, it was expected to pick up the pace somewhat from here on in. It didn’t. We were confronted with yet another hour of tedious cut scenes, before we waved our western white flag and surrendered.

The whole experience was somewhat foreign, and it’s difficult to see the appeal. You are completely swamped with dialogue, which is offset with simple static stills of artwork that’s a real struggle to engage with. Although the characters are certainly quirky, with the young children both sporting furry ears and tails, like you do, there is far too much fluffy dialogue that makes the whole situation feel stagnant. If any game takes the ‘active’ out of ‘interactive’, it’s this one.

And although it’s a relief when the game mechanic finally arrives, it’s very much old school RPG, making it almost impenetrable to anyone other than hardened RPG players.

If the visuals had been spruced up with some actual animation perhaps, where the player also had to do more than just choose a different destination once in a while, then perhaps that would have gone some way to maintain interest.

With no mainstream appeal whatsoever, this ‘game’ will attract existing die-hard fans of the franchise only, with casual gamers recommended to keep their curiosity – and their distance –from it.