There's a current trend that games in general, and so-called AAA titles in particular follow. Once they get so far with a series, they wonder where to go next with it. Invariably, some bright spark chirps up and offers "I know, what about going back to the beginning...". Battlefield's done it, so has COD, and even Rayman went back to his roots. Obviously the one everyone is waiting for is FIFA; players with moustaches, running around with long shorts and long sleeves, kicking something that's almost spherical around, with DLC including a kickabout in no man's land in 1914.

It comes as no surprise then that those sneaky, cheeky assassin's, who have already trounced their way through history, would take a leap back and do a massive rewind through time.

Ancient Egypt, during the Ptolemaic period, and it's hot, hot, hot. Sure the weather's great, and warm sand feels ticklish between your toes, but life is far from plain sailing. Bayek, a Medjay (an elite police force; think the Judge Dredd's of the time), has got his hands full. The Pharaoh, Ptolemy XIII, believes he knows what's best for the people. The people disagree, as does his sister Cleopatra. She wants to bring him and his evil ways to an end, and wants Bayek's help to do so. On top of this, Julius Caesar is keen to send his troops in, so he can have a slice of this Egyptian pie.

As Bayek travels through the land, he along with his wife Aya, find themselves part of an elite organisation that wants to improve their particular skills of being able to assassinate key figures with as little fuss as possible. And so the creed begins. 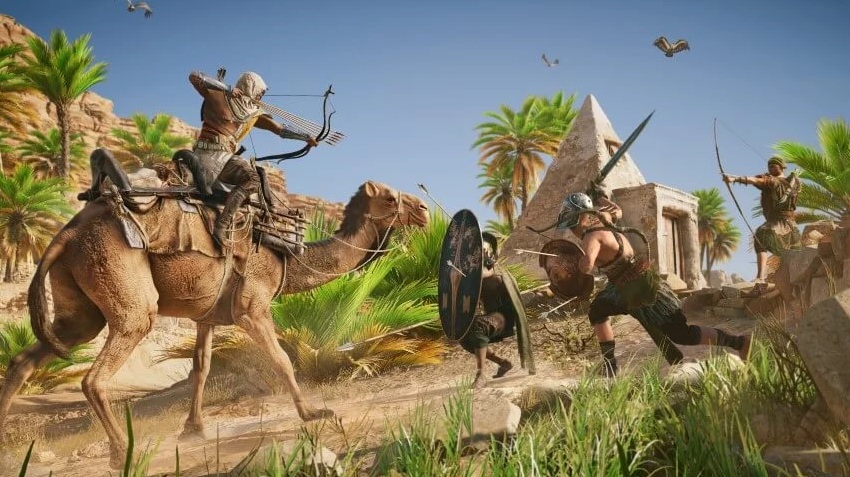 I've really got the hump now.

One thing you're guaranteed with an Assassin's Creed game, and that's a sense of scale. Origins is no different. You start off in a small part of the world, and as you explore more of the world, by foot, horse or camel, it just gets bigger and bigger. Origins has to have one of the largest world maps in the series to date as it is huge.

But it's not just the size of it, it's the myriad of quests within it. As usual you have the main quest to follow, but as always, the game likes you to put that to one side and indulge in a side quest or three. With the main story and an incredible amount of side quests to complete, there is so much gaming here it's almost dizzying, to the point that you could easily lose the plot.

But if you're going to get lost, you couldn't do it in a more beautiful world. You would think that by going back in history, everything would look and feel basic, but that couldn't be further from the truth. Egypt is a stunning location to explore; from the dessert wastelands with its pyramids, its wide, treasure-filled lakes, to its bustling cities. Wherever you roam, you can expect five out of five on TripAdvisor.

After playing for over ten hours or so, we we're surprised to be dragged back to the future, with some tedious shenanigans with the Animus in modern day Egypt, but as this is an origins story, it's only to be expected. Thankfully you don't have to do too much, and therefore it doesn't break up the rhythm of the main game. 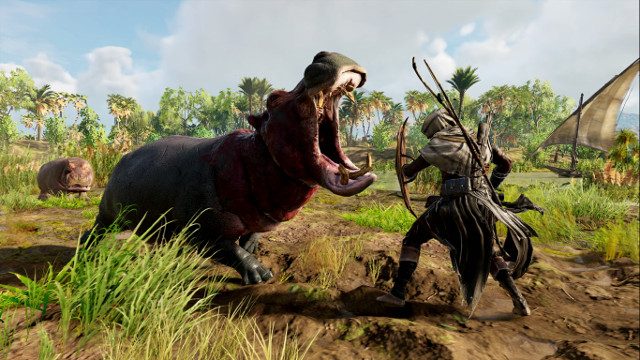 They could definitely do with a clean. Do you floss at all?

One of the big changes in the game is the star system - it's gone. Where once a quest was rated out of five stars, with five being the most difficult, this title has adopted a level system. It's a system that looks like it just keeps on going up, with no intention of ever stopping. It took us a while to realise the numbers on parts of the world map in areas that we hadn't visited yet, actually related to the level rating for that particular area. It's good to take notice of these, so you don't inadvertently wander into an area you're just not ready or equipped for, like we did. We were constantly being caned by creatures we earlier had no problems with dispatching, and we suddenly found that we overwhelmed to the point of death all too frequently. In terms of changes, it's not a biggie. Unlike the fighting system.

Pretty much the entire franchise to this point used the same fighting system. It had a fluidity to it, often based on moves triggered by button prompts, that allowed for numerous chained attacks. Not anymore. The fighting mechanics have been completely overhauled, and not necessarily for the better. For instance, your main attack button is the right shoulder button. You heard that right. A button often used for secondary actions has now been promoted to the main man, and it sucks. To make matters worse, it's essentially become a button mashing fest. Whatever finesse the franchise had in this respect, has had its throat cut in a completely unsubtle way.

This has a major knock-on effect as far as the main protagonist is concerned; the stealth-like qualities normally attributed to the assassin in question seem to be mostly ignored. Even the normal hanging from a side of a building underneath a passing foe above, readying for a stealth kill has had all the joy sucked out of it. It's still there, but feels a far more laboured experience. This goes for stealth kills in general; you are more likely to commit a stealth kill and have it alert a passing baddie, regardless of how sneaky you are. Yes we understand it's an origins tale, but this may be taking it a tad too far.

All that said, it didn't spoil our overall enjoyment of the game, amazingly. They would normally be major tweaks in a game like this, but Origins is just so much bigger and better than that, that these changes can be overlooked.

Playing Assassin's Creed Origins is a sheer gaming experience, full of joy and wonder. For a change, going back to the start of this adventure makes perfect sense for a franchise so linked with history. The story is the most absorbing of the series in years, and the Egyptian setting makes for pure escapism on every level.

It will be interesting to see where the series goes next, with only forward in time the logical step, once more, but where? It's only a matter a time before it's the future and/or space, but in the interim, enjoy the spectacle that Assassin's Creed Origins has to offer by the pyramid-shaped bucket full.