History. It's so last week. The only history anyone is really interested in these days is what happened in the last episode of Game of Thrones.

There will no doubt come a time, probably in the not so distant future, that all history will be forgotten, just so our hard drives can maintain enough space to cope with the present.

In this history-less future, there will be only two methods of learning of what's happened before; the dubious truths offered by Wikipedia, and video games with a historical bent. That's right, games like the Assassin's Creed franchise will be treated like the Encyclopaedia Britannica. In fact between them and Horrible Histories, you've got all you need to know about history right there.

Ubisoft may well be aware of their responsibility to inform gamers of historical facts, and may have gotten carried away a tad with it. Assassin's Creed III was set during the American Revolutionary War and had you play a character called Connor. Although highly detailed, the game was more interested in how the history of this period played out, as opposed to being any fun to play out with the character. Which it clearly wasn't.

Connor was just too overly serious about everything. He'd be great to have your back in a fight, but you really wouldn't want to hang out in a pub or spend any time with him socially. This made the whole AC3 experience a rather dull one; sure it was informative, but it's certainly not a title that would see you keep going back for more.

Ubisoft have learnt from their own history however and remembered the fun factor with their latest Assassins game. After all, what could be more fun than being a pirate?

No one looks forward to Monday mornings and the start of yet another working week. That all depends on the kind of job you do of course. Getting a job at Abstergo Entertainment isn't your regular nine to five. The idea of sitting behind a desk all day may not sound all that appealing, but as you soon discover, your new position really does take you places.

Not long after sitting down and logging on, the Animus soon transports you to the eighteenth century as you take on the memories of a certain Edward Kenway. Kenway is a British pirate who sails the seas of the Caribbean in search of many things, including his fair share of loot.

The more memories of his that you sync, the deeper you're plunged into Kenway's mysterious world; there are Templars in this time period that have their own agenda, and are prepared to do anything to see it through to the end. Kenway's world soon collides with theirs when he unwittingly takes the life of an assassin, which leads to him taking on his identity. It's the start of an epic adventure for Kenway, over land and sea in search of answers, and of course, treasure.

Although the period in history is different, you'll be on familiar ground with the general mechanics of the game. All the bells and whistles of previous characters are pretty much intact here. In terms of controls however, there does feel like an over-dependence on the R1 trigger for speed when it comes to free running, but you do kind of get used to it. But looting, assassinating, climbing etc should all be second nature to anyone who has played an Assassin's Creed title before. 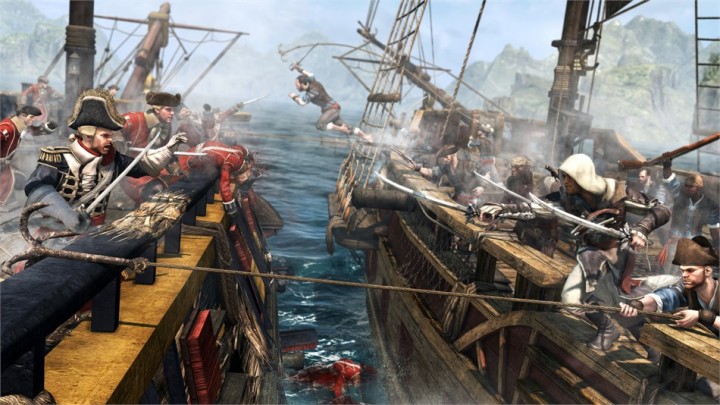 We'd like to inform passengers on this Saga cruise to stay in their cabins, whilst we sort out a minor problem with the locals. We should still be good to go for the bingo tonight however.

You would think that would lead to a sense of over-familiarity, but it doesn't. It manages this by bringing back some of the more enjoyable elements of the last game and expanding on them. The most prominent being that of sailing. It is highly likely that you will spend more time aboard your ship the Jackdaw, than you will on land. The reason? This is where a lot of fun is to be had.

On board the Jackdaw you are able to travel the vast map of the game, visiting many a location. Along the way you will encounter battles, some of which you will win, and many you will lose. The key is to pick your battles carefully. With the use of a spyglass, you can get useful Intel on ships in your area, which will help with your decision to enter into battle with them or not. If there are other ships nearby to them of the same nationality, you can guarantee they will rush to the aid of their patriots and take you down if they can.

It's not a new concept, as anyone who has played The Legend of Zelda the Wind Waker will testify to; the entire sailing premise from that game has wafted on a heavy breeze into this one pretty much intact, but just on a bigger scale.

The adventure continues under the waves too, with the aid of a diving bell. Although a nice touch, the swimming controls are nowhere near as intuitive as those of on land, but that's pretty much the same for every game.

One of the biggest pluses this title has over the last is in its main protagonist. Where Connor was a fairly serious individual, Kenway is brimming with personality. It could have done with a little more pushing however; there would have been no harm at all if had a little more Captain Sparrow about him, but that's just nitpicking.

What makes the game stand out, certainly from the last game, is the period itself. The pirate theme just lends itself so beautifully to the essence of the Assassin's Creed franchise. The land locales are just that bit more vibrant and interesting to explore, which always helps on a game of this scale.

Then if you aid the other bits and pieces, like the return of the crafting abilities, as well as a more intriguing modern day story working at Abstergo HQ, and you've got a well-rounded and balanced gaming experience.

Some serious thought has also been put into the multiplayer too, with the hunter/prey mechanic a really fun one to get to grips with throughout various modes.

Assassin's Creed IV: Black Flag could also be called Now That's What we Call Assassin's Creed; it's a highly entertaining compilation that picks out the best bits thus far of the series, and uses them to good effect. In doing so, it manages to revive the series, that could quite easily have seen itself heading off to Davy Jones' locker. This latest instalment however is a thrilling one, and leaves the player with the hope of greater things to come on the Assassin's horizon.