After the out and out silliness of his directorial debut Superbad, Greg Mottolas follow-up is a more sombre affair, with more heart and less grossness. It doesnt make it any less entertaining however, just a bit more grown up.

Its 1987 and James (Jesse Eisenberg) is all set for a great summer travelling Europe with his friends, before heading off to college in New York. However, his parents have some bad news for him on his graduation day  his dad has been demoted and they cant afford to pay for his trip.

Not only does this mean that they are going to have to move, more importantly, it means James will also need to get a summer job. The only place that will have him is a rundown amusement park called Adventureland.

Although the rides arent exactly thrilling, he meets an interesting bunch of characters, including the über cool Em (Kristen Stewart), with whom he strikes up a relationship. But as everyone knows, love is the ultimate rollercoaster, with its highs, lows and ability to make you feel like throwing up from the very pit of your stomach when you least expect it. 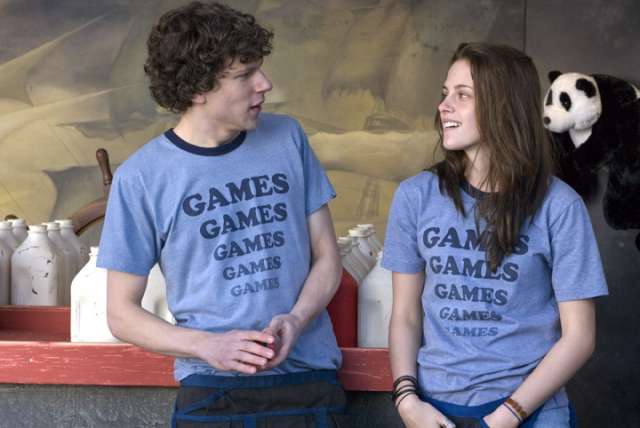 Seriously, i've never even heard of the show Popworld, never mind present it.

What Mottola has managed here is to get some cracking performances from his entire cast. Eisenberg comes across as having the vulnerable innocence of Michael Cera, mixed with the witty intellect of a young Woody Allen; despite his startling resemblance to Simon Amstell, he may well be tattooed with the words 'next big thing' somewhere about his person. He is effortlessly likeable and audiences wont be able to stop themselves from rooting for him.

Stewart has a very down-to-earth, girl-next-door appeal too, and makes the perfect romantic foil for Eisenberg. At no point in the film do you think "you know what? Shes not good enough for him anyway", as she adeptly keeps audiences on her side.

Its not just the leads that should take all the kudos however, as all the supporting actors, notably Martin Starr (geeky friend Joel), Ryan Reynolds (Mike the mechanic), Margarita Levieva (siren Lisa P) and Bill Hader (Adventureland owner Bobby) all help the film have an enjoyably even-layered feel in terms of fun characters.

Another thing the director (who also wrote the film) manages is a perfect snapshot sense of the period. MTV was still going strong, and in Adventureland, youre never far away from an eighties hit. It was a time when giving a girl a mix tape - as James does in the film  was a serious indication of your intentions, as you declared your love on both sides of a C90. And in the process, Mottola captures rather beautifully the awkwardness of new love.

Anyone expecting Superbad II in any shape or form will be bitterly disappointed. What they would have missed however, is a superior piece of entertainment. Its a sharply observed, coming of age flick that can shake its head in a disapproving manner at pretenders to the throne (sorry (500) Days of Summer, we think thats aimed at you), then show the kids how its really done.

And if you dont crave a games, games, games t-shirt, and Falcos Rock Me Amadeus on your iTunes at the end of it, then theres something seriously wrong with you.