There’s enough physical evidence to suggest that prehistoric creatures loved a day out at Lyme Regis. The Dorset coastal town has been a hotspot for fossil finding over the years, so much so that it was listed as a World Heritage site in 2001 and has been dubbed the Jurassic Coast.

Unfortunately this is about as far this film goes factually, as it takes a real life figure, that of renowned palaeontologist Mary Anning, and spins a completely unsubstantiated tale regarding her personal life. 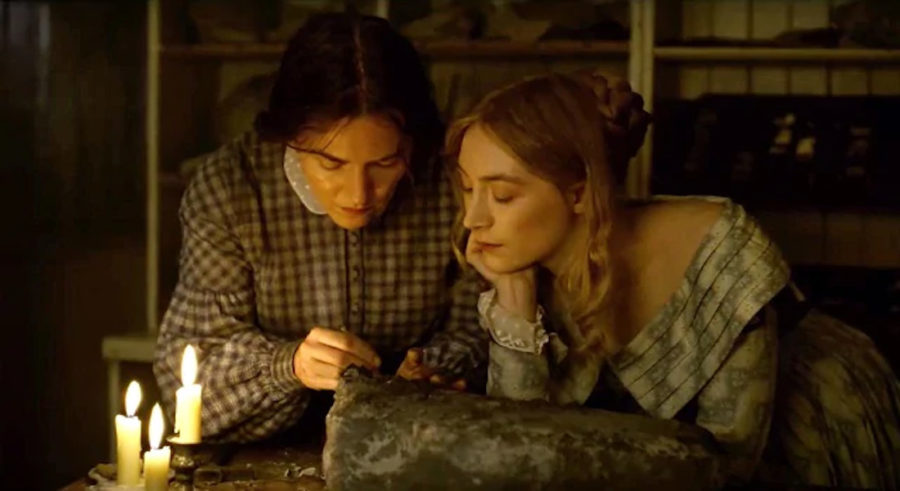 And just think, when lock down is over, we can get all the rocks we want!

Working in a small shop selling fossils and trinkets along with her mother in a sleepy part of Lyme Regis is Mary Anning (Kate Winslet). She is passionate for discovering fossils and has built a considerable reputation on it, so much so that pieces she found exhibit in the British museum.

One day a young scientist, Roderick Murchison (James McArdle), enters her shop and pleads for Mary to let him shadow her when she’s working, as he’s keen to see her method. Reluctantly she agrees, which also sees his poorly wife Charlotte (Saoirse Ronan) move down for the duration.

Charlotte is strangely ill, and even after Roderick is done, he decides that she should stay behind and convalesce. Mary takes it upon herself to help her recuperate, and as she does so, an unexpected relationship blossoms. 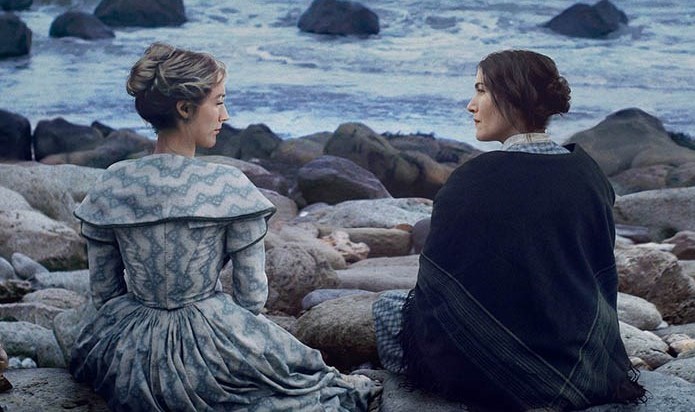 So, you didn't bring the swingball set because...

What should be pointed out, right from the off, is that British director Francis Lee’s second feature is a grey and dreary affair. In fact where it is effective is in being the cinematic cure for insomnia.

Due to its liberal use of the facts however, what it does do is raise some interesting questions regarding morality in cinema.

Although Lee’s script features an actual person from history in Mary Anning, there is no actual evidence to suggest her sexual preferences. In his defence, Lee has put forward that there should be no reason why another context shouldn’t be considered. But as defences go, this is a weak one.

Regardless of whether the director wants to offer a different context or not, as a filmmaker he must show respect to the individual themselves, who, let’s face it, aren’t around to either refute or admit to his version. What’s worse, he doesn’t even inform his audience that what they are watching isn’t necessarily the truth, at any stage, which is just unacceptable. For those who may just watch the film as it is, may well consider his version as truth, which is far from the case. To that end, the film has the ability to re-write history to a certain extent, which is wholly irresponsible.

So what next? Would it be acceptable for a film about Ghandi and his love for underage boys, or a raunchy feature focusing on Mother Theresa’s love of big black cock, no matter how unsubstantiated these stories would be? Filmmakers have a responsibility when using real life characters, that can’t be simply used on a creative whim.

Of course, a film focusing on a strong professional woman, making her name for self in the male-dominant world of science, just wouldn’t be appealing to an audience without some tagged on, fabricated, raunchy woman on woman action. Perhaps someone should mention #MeToo to Lee as a reminder on how to read a room exactly. Focusing on her possible sex life, whatever it may have been, does a complete disservice to the actual professional achievements attained by Anning.

At least Anning can rest in relative peace, as this yawn fest is unlikely to make any impact on audiences whatsoever. And perhaps whatever her sexual orientation might have been, it shouldn’t be up for creative interpretation just because the male director has decided it’s worth exploring at the expense of a factually recorded, impressive professional career.