Pickling produce is a peculiar practice. After all, who decided that putting an egg in a jar to be pickled would be culinary acceptable? Of course it isn’t, proving there’s literally no accounting for taste.

Not that it seems to put people off from stuffing food in jars full of brine. Vegetables and the like have been prepared like this for quite some time, with many believing that ancient Mesopotamians pickled food as far back as 2400 B.C.

It’s possibly only fitting then, that the art of pickling finally take centre stage, in Seth Rogen’s latest comedy. 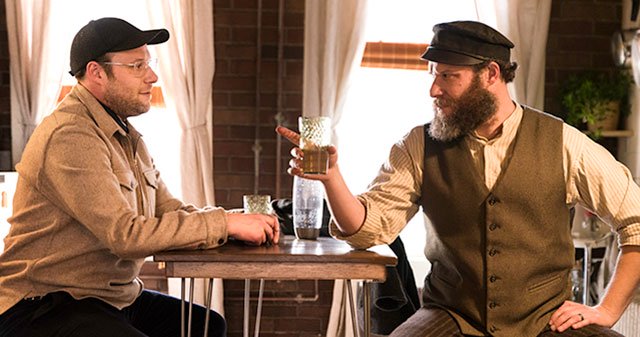 Is it wrong that I have a strong urge to make violent love to you?

Living a lonely life in 1920’s Eastern Europe is Herschel Greenbaum (Rogen). He is a digger of ditches, and finds his life very unfulfilling. Things change however when he meets Sarah (Sarah Snook); he is instantly attracted to her, and does all he can, within his lowly standing in society, to woo her.

Despite not having much in the way of money, he does enough to win her heart, and they marry. Herschel is keen for both them to better themselves to the point where their dreams become reality.

In his first step to better himself, he and Sarah leave for America, where he manages to get a job with the Capitol Pickle company, working in their factory, doing all the jobs no one else wants to do.

However, after an altercation with a large rodent population, Hershel soon finds himself trapped in a large vat of pickles in brine, just as the factory gets closed down.

There Hershel remained for the next one hundred years, only to be released by some youths who discover him in the ruined factory.

According to the scientists, he has been perfectly preserved for all these years, and is in exactly the same state physically as he was the day he was pickled.

After a little investigation, it transpires that Herschel has one family member alive today, his great-grandson Ben (Rogen), who fortunately still lives in New York City.

The resemblance between the two is striking, and the bizarre nature of their meeting, allows the pair to get to know one another.

But although they’re related by blood, when Herschel’s life quickly shoots off in a successful direction, Ben soon begins to resent this family reunion, turning the atmosphere between them positively sour. 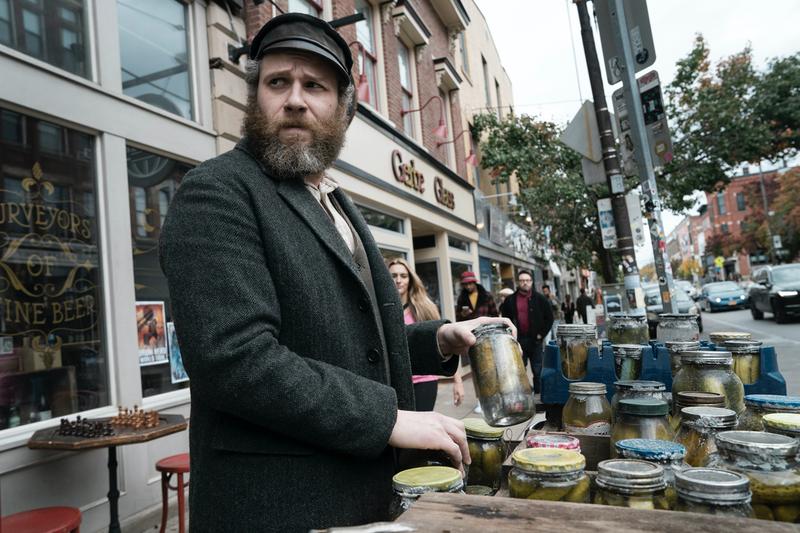 Running a pop-up pickle business is riskier than you would think.

Just as many find the concept of pickling food quite a struggle to comprehend, the same can be said for Seth Rogen in the position of a leading man. The perennial stoner act has certainly held him in good stead, but it’s fair to say he has the acting range of school ruler (that’s exactly 30cm).

And as affable as he might be to watch, there are only two things worse than a Seth Rogen flick, one of those is a film with two Seth Rogen’s, the other is an Adam Sandler film in general, and more specifically where he also plays two roles, as in the dreadful 2011 film Jack and Jill.

It’s disappointing as the first ten minutes of this feature are actually quite promising, particularly when you realise it’s the funniest part of the film. The set up in the fictional Eastern European town has a lot of character about it – and that’s with only one Rogen on show at that point – with some fun dialogue and a nice visual style.

And then the film just nose dives from there. It’s not that the science is difficult to swallow - certainly not more so than Rogen in two roles – and although the pickling element is silly, it’s still quite fun.

It’s the script, set in modern day, which really ties itself in multiple knots. It’s woefully generic in places, as present day Rogen tries to explain the likes of a Soda machine and Twitter to his pickled self. They are already tired examples, and lack any kind of creativity behind their inclusion.

Then there’s the flat storyline of present day Rogen getting jealous that his relative is doing so well, so much so that he does what he can to bring him down. And you thought a man surviving a hundred year pickling was far-fetched.

To top it all off, cinematographer-turned-director Brandon Frost, making his solo directorial debut here, also tries to have his characters convey a sense of loss of faith, and the importance of family, which mixes in with the mess he’s already created as well as oil and water.

There are times when you get a glimpse of what the film could have been, a fairly cutting satire on modern life, but the result is offensively vanilla.

If nothing else, it’s proof, to audiences and to Rogen himself, that just enduring him in one role is barely tolerable, and any more than that is simply unacceptable.