It’s fair to say that Europeans like their drink. Unsurprisingly, according to 2016 WHO data, 18 of the top twenty countries around the world who consume the most alcohol are from Europe. Surprisingly, the UK isn’t one of them, coming in at a relatively sober 24th on the list.

Even a country that is considered to have a large population of almost professional drinkers, Denmark, which also produces a lager considered probably the best in the world, only made it to the 35th position.

This didn’t deter Danish director Thomas Vinterberg from producing a film that finds its four protagonists raising a glass one too many times. 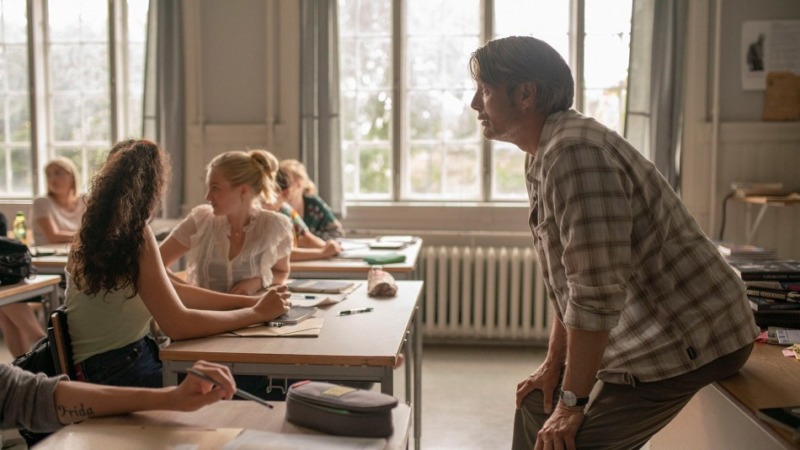 You think you're funny interrupting me huh? Just remember I played Hannibal Lecter...

Working in a school as a history teacher in Copenhagen is Martin (Mads Mikkelsen). He has seemingly reached a point in both his career and family life where he can barely be bothered to continue on the monotonous treadmill his life existence has become. So much so that the passion for teaching that he had, has virtually gone, so much so that even his students can notice.

But he’s not alone, as three of his friends Nikolaj (Magnus Millang), Tommy (Thomas Bo Larsen) and Peter (Lars Ranthe), who also teach at the school, feel exactly the same way.

During Nikolaj’s 40th birthday party, the four of them are enjoying themselves with an alcoholic beverage or three, except for Martin, to start with at least.

But during their celebrations, a theory by psychiatrist Finn Skårderud is discussed, whereby he believed that men were deficient of alcohol in their system and that their blood alcohol content (BAC) should be increased to 0.05, making them more relaxed and creative.

The group get so excited by the theory, they decide to test it out for themselves, by each of them enjoying alcohol at work to see if it improves their performance.

It shouldn’t come as a surprise that it does, but of course alcohol is a drug, and its regular consummation can also have some downsides too, which the group aren’t exactly prepared for. 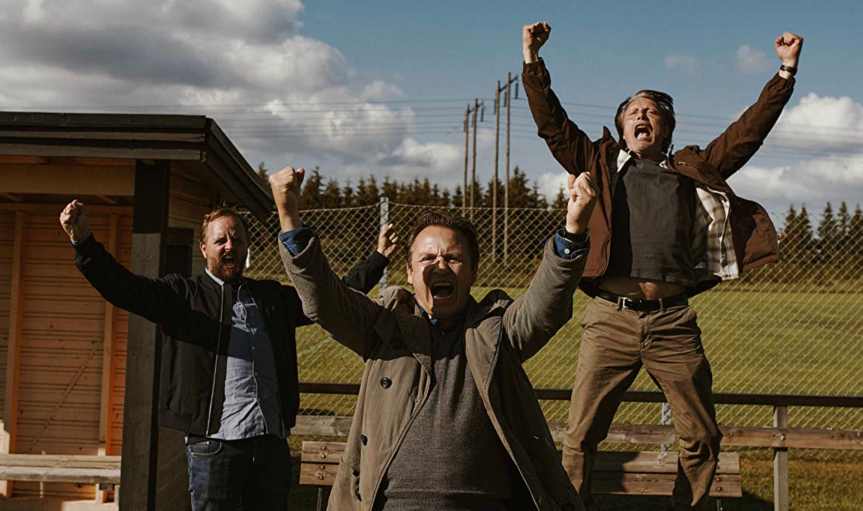 When news broke that Danish football star Christian Eriksen was going to be OK.

Although Another Round won the Oscar for Best International Feature Film this year, it has to be said that the film oddly delivers some mixed messaging. For the most part, Vinterberg’s film is more of an advocate for heavy drinking; whenever any of the characters have a drink, it’s like they have taken a magical elixir that transforms their lives for the better. Even the final scene comes across as a celebration of alcohol, with Mikkelsen performing a public dance performance in its honour.

In that sense Vinterberg’s film is a selfish one; anyone who has either had a parent, partner or friend who suffers or has suffered from alcoholism can testify that it’s no party. It is a disease that most definitely doesn’t just affect the drinker, but those around them, who often have to take the full brunt of their alcohol-fuelled behaviour. The film completely ignores this fact, and at one point even mocks it, by having Martin’s wife actually prefer this new drunk version of her husband.

And even when they do eventually confront the issues in their relationship, the drink aspect doesn’t even get addressed, with Martin seemingly suffering from mental health issues, as do the rest of his drinking buddies, which has brought on this mid-life crisis behaviour on them all.

Although testing a theory is an interesting premise, it does feel like the film is, on the whole, more of a celebration of alcohol than condoning it. None of the characters truly suffer from indulging in alcoholic beverages, in fact it seems that one or two of them only do so to numb the pain of more serious mental health issues which seems to be the real problem here, which has its own consequences in the film.

Perhaps Vinterberg was disheartened by his country’s placing on the league table, as there’s nothing in his film to dissuade an audience from enjoying a glass or two, which would hopefully have Denmark in the running for a place in the top ten.

The friendship between all four characters is certainly an endearing one, and Mikkelson does well in presenting himself as a broken man sober, and a man who has found a reason to live with joy in his life under the influence.

But in a world that is seeing both an increase in binge drinking and more deaths from alcohol abuse across the globe, Another Round’s attitude towards alcohol is worrying casual, so much so that it's not one worth cheers of any kind.