According to this latest shooter set in a futuristic Seoul, the South Korean capital is swell. Which is a relief, considering all the current shenanigans north of its borders.

That said, despite all its pretty neon and holographic signs - think Blade Runner meets Hello Kitty - the city does take a bit of a pummelling.

You see there's evil afoot by way of the dastardly L.E.G.I.O.N - League of Evil Gentlemen Intent on Obliterating Nations. as the name suggests, they want to take over the world, which is bad news for all concerned.

Never fear, for they won't have it all their own way, not if M.A.Y.H.E.M (Multinational Agency Hunting Evil Masterminds) has anything to do with it. It's many agents, with their own unique attributes, will do everything in their considerable powers, to stand up to MAYHEM and stop them in their tracks. 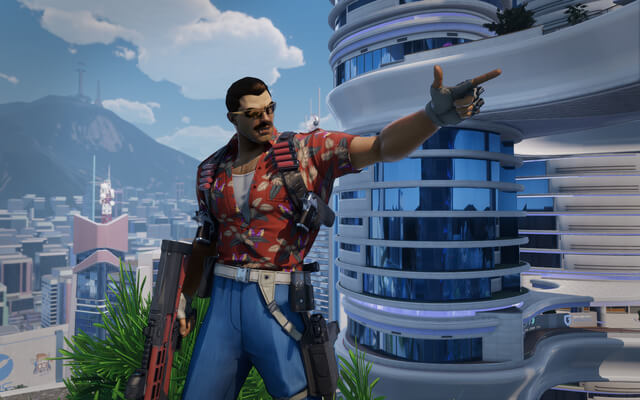 All we hear is Radio gaga.

From the initial trailer, it would be easy to think that Agents of Mayhem, with its array of stylish characters, was in fact a multiplayer shooter in the vein of Overwatch. It isn't. Actually it's a substantial single player fest featuring third-person shooting.

You begin with a rota of three agents at your disposal. They only carry one weapon each, but it does become more powerful the more times you level up. As you progress through various missions, you'll get the opportunity to enlist another member; however, you still only have three members to your team to deploy at any given time. You can just stick to the initial three you choose and level them up to their highest point - which is initially 20, but can be increased beyond that with additional collectibles - but there will be missions where other agents will have to be used, in their solo missions for instance, so it's advisable to use a number of them over and over.

If you had to choose only one, then Daisy would be a safe bet. She has a minigun that can pretty much destroy all those that get in her way, particularly when she's levelled all the way up. 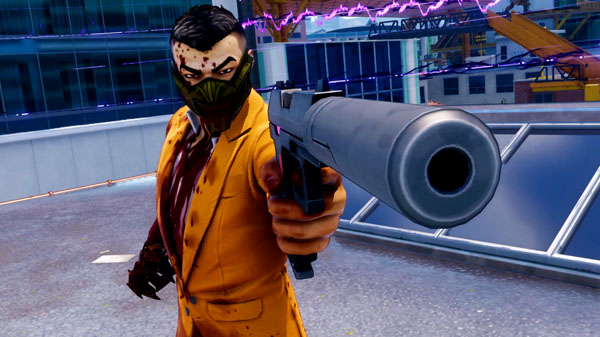 Look if i don't kill you, then pollution will.

If you had to choose only one, then Daisy would be a safe bet. She has a minigun that can pretty much destroy all those that get in her way, particularly when she's levelled all the way up.

Each character can also power up their weapon from time to time, to help out in sticky situations. Some of these are more fun than others. One character (the DLC Gat from the Saints Row franchise making a special appearance) only sprays bullets from his weapon in an arc, whereas Kingpin has a stereo that can paralyse enemies for a short period of time, which is at least 57% more fun to use.

The game's presentation and art style is clearly a nod to Saturday morning cartoons, if they happened to show South Park on then. It's a very vibrant colourful world to explore, but the characters do have potty mouths. The fact that there's swearing doesn't actually add anything to the feel of the game, and is completely redundant. Swears don't automatically make a game funny, which the developers have got completely wrong here.

With so many characters to unlock and a large number of missions and events to take part in, Agents of Mayhem is brimming with content. After a while however, it can get all rather repetitive; for instance, attacking a lair feels exactly the same every time, despite varied enemies to tackle.

It's also not helped that after completing some missions - particularly the Relic Trading Companies, which you can earn cash from once you've liberated them - they can literally be recovered by the enemy instantly after you've finished the mission. This means that there's a fair chance of chasing your tail a lot throughout the game, which can leave you frustrated to say the least.

Despite a number of niggles, Agents of Mayhem still manages to be a fun single player experience. And that's all it is, as there's no multiplayer aspect, which is odd, as the multiple characters certainly lend themselves to mayhem of an online kind.

Also, if you're a fan of the Saints Row games, this comes from the same developers, and is set in the same world, as well as including a number of plot and character cross-overs from the series. But if you haven't played any of those titles, the game still manages to stand on its own two feet.

With a little bit more thought and consideration, Agents of Mayhem could have been a stand out title of the year, as it is though, it remains a thoroughly enjoyable romp through a colourful and violent world. Mayhem indeed.