A Prayer Before Dawn

Fights are rubbish. Punchy punchy here, bop bop there. And nothing but bruises to show for your troubles. The one exception is if you just so happen to be Anthony Joshua, who has made a pretty penny from his left-right, left-uppercut shenanigans. For the rest of us, it’s just not worth it.

A Prayer Before Dawn is only French director Jean-Stéphane Sauvaire second feature, but is happy to put the gloves on and put up a fight in a popular and crowded genre. Ding ding! 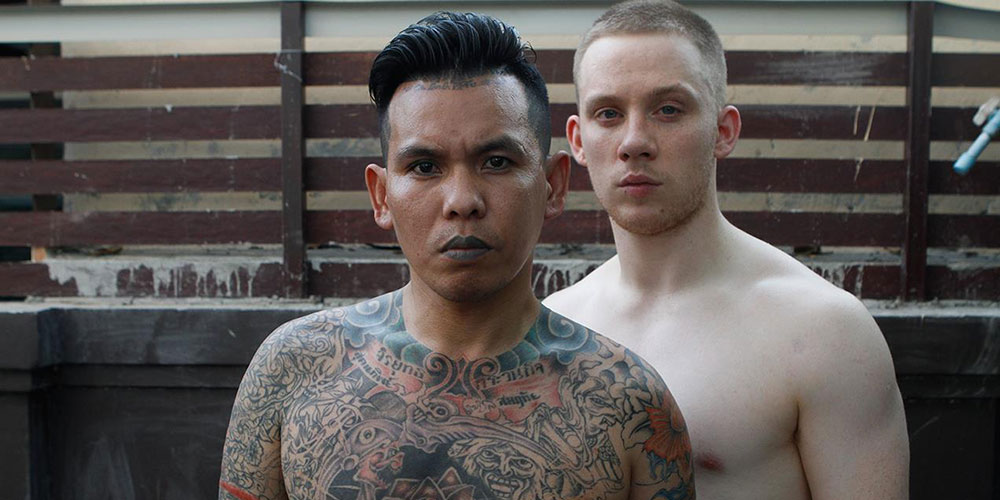 The Pet Shop Boys were unsure about their new look.

Young Liverpudlian Billy Moore (Joe Cole) is in Thailand, but is far from experiencing the usual tourist beach holiday. He enjoys partaking in Muay Thai boxing, which he’s pretty good at. Unfortunately, he also has a drugs problem, which gets him into trouble with the police, who send him to prison.

If prisoners in the UK think they have it hard, with their Sky TV and smuggled in mobile phones, they should really thank their lucky stars they’re not locked up in a Thai prison. With no grasp of the language, Billy is thrown in to a world full of tough inmates, who are more than happy to take advantage of his dire situation, particularly as getting hold of drugs appears easier on the inside.

One beacon of hope is the prison’s boxing team; not only do they get treated better than the average prisoner, they also get to leave the grounds – albeit to another prison – to take part in competitions. But can Billy take control of his habit long enough to make an impression with the team?

There’s definitely a built in grittiness to boxing flicks, usually following a protagonist’s tough journey from the streets to possible glory, but Sauvaire’s film takes it to a whole new, darker level. In fact it’s fair to say that the boxing elements, which are impressively shot with brutal realism, are possibly the most uplifting elements of the film.

Sauvaire leaves you with no doubt that a visit to a Thai prison should most definitely be left of your itinerary. They are sordid, overcrowded spaces with many an inmate who would be keen to love you long time.

As if Billy’s journey wasn’t bad enough, it’s made worse by the fact that it’s based on a true story. And although the real Billy may well be home now, he’s still haunted by his demons, as it was recently reported that he missed the film’s premiere as he was arrested for burglary, sentenced to two and half years imprisonment. Still, at least it wasn’t in Thailand again.

Although the film can be a difficult watch, Cole’s striking performance will captivate from beginning to end. It must have been about as far away from being the glamorous shoot as you could possibly get, not forgetting being regularly punched and kicked to boot, but Cole rises to the challenge with the truest grit.

Although Sauvaire doesn’t manage to avoid all the clichés that come with this type of flick, he shot it in such a manner – in a quiet, voyeuristic, almost cinema vérité style – that makes it completely compelling, albeit with a side of order of uneasiness.

A real heavyweight contender then, that deserves the title for not holding back its brutal punches.