Truth is a curious old concept. After all, one person’s truth can be another’s stinking pile of rotting cabbage. And as Mark Twain said (or did he?), never let the truth stand in the way of a good story. So if you thought that fake news was a modern phenomenon, think again.

Whatever truth might be, there appears to be an insatiable appetite for news, particularly now with 24 hour news stations and instant feeds on websites and social media.

One journalist who was keen to get genuine news out into the world, at any cost, was Marie Colvin.

I aced that test, even with just the one eye!

Marie (Rosamund Pike) had been working as a Foreign Correspondent for The Sunday Times from 1985. She was constantly sent to war zones where she developed a nose for searching out the truth. This could come at great expense, as it did in 2001 when she lost an eye in the conflict in Sri Lanka.

In 2003, on the Iraq border, she met war photographer Paul Conroy (Jamie Dornan). He had been a fan of her work for some time, so when she asked him to tag along with her, he couldn’t say no, despite the dangerous waters she explored.

Together they reported on many wars in far off places, but in 2012, whilst in Syria, they were confronted by a terrifying war raging, that showed no mercy for civilians nor journalists. 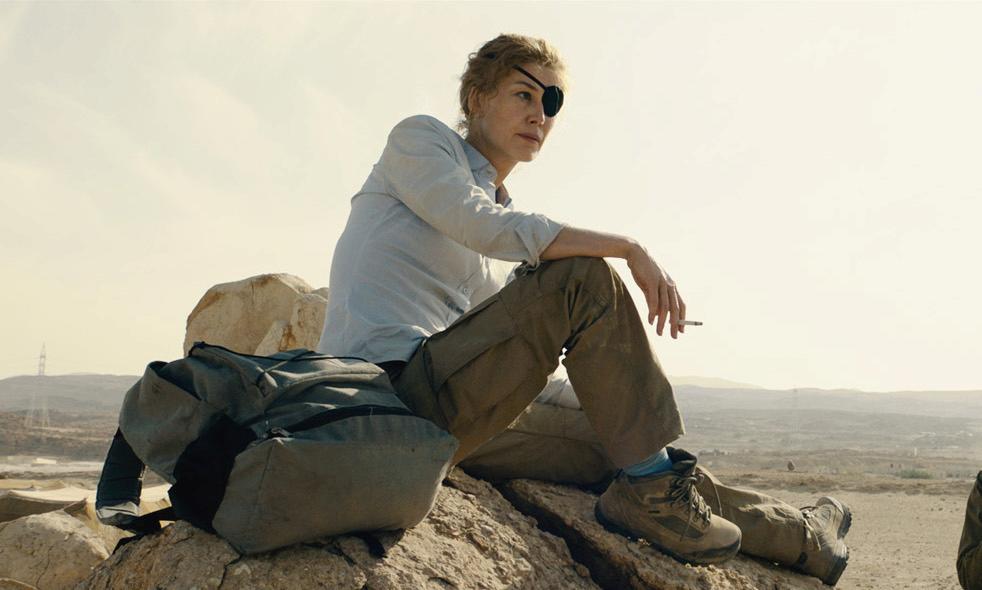 I'm already writing my Tripadvisor review about this place, and it ain't good.

Actors are drawn by unique stories, so it’s no surprise that Pike was attracted to Colvin’s. But actors also like that little extra, and there is no doubt that this actress was sold on the fact that she had to wear an eye patch. If you’re going to go down the glamorous actress going gritty, as Charlize Theron did with Monster and Nicole Kidman did recently in Destroyer, an eye patch is going to do so much of the heavy lifting.

That said, Pike gives a remarkably rich performance playing a truly remarkable character. Colvin was a chain-smoking journalist, passionate about her work, but also suffered from it, with her personal life and mental health coming under severe fire, haunted as she was from the horrors she witnessed.

It’s also good to see Dornan finally free from the absurd shackles of all that shady business, getting back to the front of serious acting once again.

US Director Matthew Heineman’s first foray into commercial filmmaking, after overseeing a number of documentaries, is a strong one. He’s clearly taken what he’s learnt from his previous work, and put it to fine use in delivering a film with all the usual Hollywood sheen removed. It could easily have gone down the Michael Bay route, but Heineman stays true to his main character’s personal grit, with what feels like a reflection of real human horror.

There’s still no denying the truth of it though; Pike really knows how to rock an eye patch.