A Rainy Day in New York

When it rains, it pours. Not so long ago, Woody Allen was the darling of the pseudo intellectual film buffs, who could do no wrong. Actions in her personal life however soon changed that, heinously tarring his name in much the same way as others in the entertainment industry such as the convicted Cosby and Weinstein.

But although his relationship with the adopted daughter of his then partner Mia Farrow in 1992, Soon-Yi Previn, who was 21 at the time, and to whom he is currently married, was certainly morally questionable, he didn’t actually break the law.

Since then he has also had a number accusations made at him of sexually assaulting minors, but it’s important to state that none of these have yet been proven in a court of law, so these accusations remain just that.

Somehow, amidst the media storm that seemingly constantly surrounds him, the 84-year-old still continues to work, with this effort marking his 48th film, set as it is in his favourite city in the world which he calls home, NYC. 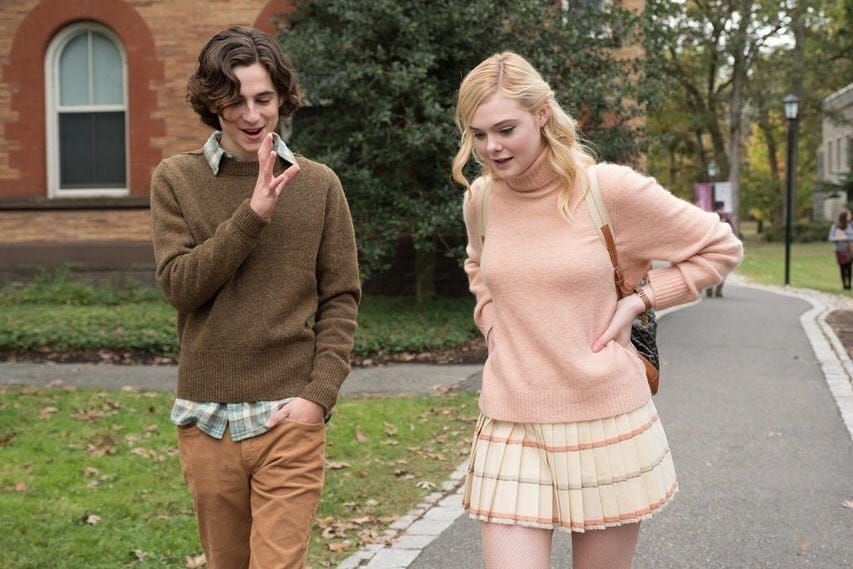 No honestly, I really beleive you're the best Fanning out there.

Studying at the leafy college of Yardley is Gatsby Welles (Timothée Chalamet). Although not academic in the traditional sense, Gatsby is a smart cookie, with curious interests such as gambling and old films.

He seems bored at college, so when his girlfriend Ashleigh (Elle Fanning) informs him that she has to go to New York City to interview a famous director for the school paper, Gatsby sees it as the perfect opportunity to show her around his much-loved home city, and make a weekend out of it.

It’s a chance for him to not only show her around, but also simply enjoy a romantic weekend together. Unfortunately, things don’t quite go to plan, when Ashleigh discovers that Pollard (Liev Schreiber), the director she’s interviewing, is going through a bit of an existential crisis, taking up far more of her time than initially planned.

This leaves Gatsby to explore his city on his own, bumping into a few chums and acquaintances, which leads to both he and Ashleigh on a curious adventure, albeit separately, as the rain pours down around them. 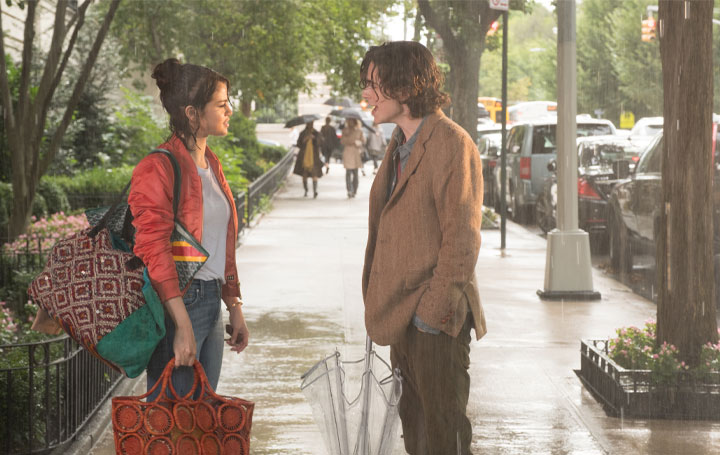 No, I'm from the App UMBR, where someone rocks up with a brolly to walk you to your destination.

It must be difficult to be Woody Allen with so much hate pointed in his direction. And yet somehow the director manages to bury it away and continue to work. And it has to be said, this film is quintessentially Allen. All his usual themes and passions are here, including the city of New York and his standard jazz soundtrack.

As with the oeuvre of his work, the voice within is unmistakeably Allen’s. Here though, it’s not just the male protagonist played by Chalamet that channels the spirit and personality of Allen, but a number of other characters to, most notably Fanning’s Ashleigh. But What Fanning manages to do, in what has to be said is an entertainingly playful performance, is not only take on some of Allen’s quirks, but somehow also imbues Annie Hall herself, to the point that you half expect her to utter “La-di-da” at any moment.

Fanning’s character isn’t the only gem, as Selena Gomez gives a vibrant and engaging turn as Chan; you can say a lot about Allen, as they surely do, but he has to be given some credit for given strong roles to women in virtually all of his films.

And although the film is set in modern day New York, there’s an unmistakably old school, old fashioned charm about it, from Chalamet’s dated outfit, to the trademarked Allen quips that are littered throughout.

It is a film brimming with wit and charm, and is certainly one of the director’s strongest films in recent years. It’s a little disappointing then that he’s received a fair amount of backlash from those he’s hired in the past, who have seen fit to not only distance themselves from him but also make public statements against him – remembering that he is supposedly innocent ‘til proven otherwise. Much of it may well be to simply be seen to support the popular consensus – however unsubstantiated it may be – in a bid to protect their own careers.

However if a story in Allen’s recent book is to believed, Chalamet himself did exactly that, publicly stating he regretted working for Allen. The director then states that the young actor told Allen’s sister that the only reason he did so, was that he and his agent thought that his chances of winning an Oscar for his role in Call Me By Your Name would be put in jeopardy if he didn’t denounce him. Chalamet to date has yet to refute that conversation ever took place, so read into that you will. And no, he didn’t win the Oscar, so perhaps some karmic retribution at work there.

It’s also troubling that the actors who have stood resolute with Allen, including Larry David, Diane Keaton and Scarlett Johansson, have all been publicly shamed for their support, presumably by a majority of haters who neither know Allen personally or have never worked for him in any professional capacity.

It’s no doubt many will still have issues with Allen and his work, regardless of whether it has been proven he’s broken the law or not. You know, smoke, fire.

But to dismiss Allen the filmmaker just feels wrong and unjust. A Rainy Day in New York is a delightfully whimsical slice of classic Allen, that despite the dull forecast, shines an attractive light on the city that never sleeps, and Allen’s array of curious characters who inhabit it.

In short, it’s undeniably Allen. Fans are likely to love it, whilst haters will just keeping on hating.