Depending on who taught you, history lessons at school either came alive with vivid imagery, or were as dry as a digestive. If it wasnt for games like Call of Duty, Age of Empires , The Beatles: Rock Band etc, a whole generation brought up on the biscuit approach to history would be clueless as to the mysteries of the past. Thankfully, gamers can now add Assassins Creed II to their curriculum.

The first outing for Desmond Miles (voiced by Nolan North, who also is the voice behind Uncharteds Nathan Drake, fact fans) saw him travel back in time and relive the past of his assassin relative Altar. Set during the time of the Crusades in Jerusalem, the game looked magnificent, but was rather badly let down by being far too repetitive in its game play.

In a somewhat startling move, Ubisoft actually listened to feedback from gamers and did their darndest to rectify matters for this here sequel. 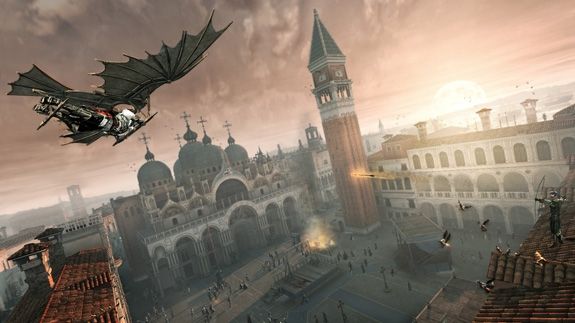 I'm really not sure about this new budget Easyjet service. Where's the in-flight entertainment?!

Desmond finds himself in a new hideout, with Lucy introducing him to a new Animus (the super-tech gizmo that allows him to relive past experiences as well as learn the tricks of the assassins trade), as well as a couple of new faces to help him out, Rebecca and Shaun (voiced by Yes Man Danny Wallace, who presumably, couldnt say no to the project).

His adventure this time sends him to 1476 Florence, Italy. He inhabits the mind and body of Ezio Auditore di Firenze, a young, passionate man who is hell bent on revenge after his father and brothers are executed by an evil corrupt official.

The level of detail that as gone into the game is at times jaw-droppingly awesome. Taking control of Ezio for the first time, you soon realise that there are little in the way of boundaries. He is almost the bastard child of Laura Croft and Nathan Drake in the way he climbs around his environments; his black sheep uncle of the family might also be GTAs Niko Bellic, with his method of interacting with the ancient world around him. In summary, he has quite the pedigree.

Theres a real fluidity to the missions, and thanks to the variety of them this time around, they never feel dull. Besides, there are plenty of sub missions that you can accept if you so wish, that act as a nice break from the main story. What you should be prepared for is that there is around 40 hours of play on offer here, if you decided to play through the main story and side missions. Chances are though, you will do, as the world is so immersive, itll be one youll find difficult to drag yourself away from.

Getting to grips with Ezios climbing abilities can be a bit tricky to pick up; its a lot of pushing up on the left thumb stick and hoping for the best a lot of the times. As well as that, you also have to pump a few buttons to get him going. Whats worse though is the palaver you have to endure to get him running; patting your head and rubbing your stomach clockwise feels a more natural action in comparison. You have to push forward, hold down a trigger to make him run faster as well as steer him in a direction. What faff. Still, Ezio will eventually get to where you want him to, even if it is at the expense of you developing a repetitive strain injury.

Sometimes though, as long as your wanted status isnt through the fresco ceiling, its just a really pleasant experience to walk through the streets and just soak up the atmosphere. The only thing missing is a nice little coffee bistro that you could sit down at, order an espresso or two, and watch the world go by.

You can also purchase goods and upgrade weapons etc in this sequel. You earn money by helping to rebuild the Auditore familys villa in the country. Invest in the growth in the banks, for instance, and youll earn a bigger income from it. Besides, its good to have a little loose change in your pocket, as you can throw it into a crowd to cause a distraction.

Getting around is a little easier too; riding a gondolier in Venice at a leisurely pace is certainly a pleasant way of getting around, but for more excitement, you can take a horse for a ride. Riding on horseback around a world hasnt been this much fun since hopping on the back of Epona in Hyrule. You can even take out baddies while riding around on the back of them.

Not only is the story compelling, the dialogue is never tired or repetitive  its actually surprisingly humorous in places; at one point, someone who apparently knows Ezio, approaches him and announces itsa me Mario!. Molto bene! And where else could you hang out with Leonardo di Vinci, and have him custom make weapons and gadgets for you like a renaissance Q.

Admittedly, combat is still a little on the clunky side, but never so much where it detracts from actually being fun to play. Theres a fighting arena at your villa, where it is a good idea to hone your fighting skills. The more prepared you are, the less prone to button bashing youll be.

With so many different elements to the game  with its smorgasbord (or whatever the Italian equivalent is) of action, stealth, RPG, etc  all of which solidly complementing each other, the overall experience youre left with is nothing short of epic.

It doesnt matter that the game is more fiction than fact, what Assassins Creed II will be remembered for is its fine contribution to the history of gaming. Saluté.