It seems that every time you turn around another title in the ever-expanding Assassin's Creed franchise pops up out of the blue. The franchise has seen ten titles released since 2007, and that's not including a couple of IOS games.

Certainly with the arrival of Assassin's Creed III to consoles this year, it's a fair criticism to be aimed at Ubisoft that the series is close to suffering from, somewhat ironically, overkill in the games market.

PS Vita owners would probably disagree, seeing that their crying out for decent AAA titles for their portable friend. And lucky for them, Liberation doesn't disappoint.

A first for the series is the introduction of a female protagonist; you play Aveline de Grandpré, an African-French assassin living in 18th Century New Orleans. Over a number of years, she takes on various missions as she does her best to stop the Spanish from taking over her fine city. 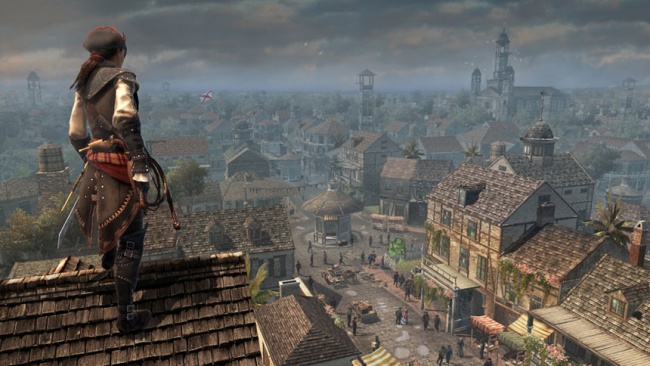 I don't believe it, my GPS has sent me the wrong way again. How do I get down from here?!

Having played several games on the Vita already, it's still a surprise to see what it's actually capable of. Just a few minutes into this title and it feels instantly recognisable as an Assassin's Creed game. There shouldn't be that much surprise considering that the game supposedly runs the same engine of the Assassin's Creed III game.

The only problem of running that particular engine of course, is that you run the risk of inheriting a number of the niggles that come with it. There's no denying that the game is fairly ambitious for its first Vita outing, but it can be just as frustrating at times as playing its console version.

On certain missions however, you have to follow the path to the letter; at one point we found ourselves out in the Bayou and had to trail a bunch of soldiers. At one point they just held off, waiting. They waited, and waited, and waited. Our orders were to just trail them from a distance. Having got bored with that, we decided to pop up next to them and knock them off one by one. But even standing right next to them, walking inbetween them even, they didn't notice our presence; now we know how that ginger one from Girls Aloud feels. After a while we realised that the are we were supposed to be was very specific  up in the tress in fact  and then the scene continued to play out.

Then there were times when it wasn't really thought out to well. Another mission found us weapon-less in the jungle, and we had to find various items to cobble a weapon together. A fairly straightforward request. Halfway through however, one of our tasks was to steal a rifle from a passing soldier to shoot some gunpowder, to make a distraction to steal some items to make a weapon. Wouldn't it have been easier to just steal a weapon in the first place? The answer is, yes, of course.

But these are just the kind of nags that fans of the series have to generally put up with. Thankfully it does enough right to put these niggles to the back of your mind.

Whereas there's a slight blandness regarding Assassin's Creed III historical setting, Liberation's take on the deep south has far more warmth and personality about it. Aveline's free-running abilities in both built up and rural areas is very intuitive and responsive. And, for the most part, the front and rear touch screen commands work well; for some reason pickpocketing was always problematic, being overly fiddly to work, but you get there in the end.

Another nice touch was the mini-trading game; you get to buy some ships, sail to different islands and trade and sell items. It was only let down by a clumsy interface, which was made worse by not having any on-screen instructions on how to interact with it.

The multiplayer side of things is a bit of a cop out, as it does not feature the running stealthiness of previous online shenanigans, resorting to a rather disappointing strategy style game. Still, the single player campaign is a hefty adventure, which helps compensate for the loss of a true multiplayer.

As a first stab of an Assassin's Creed game on the go, Liberation isn't far off the mark and a positive step in the right direction. If there are to be any more outings on the Vita however, it will need to raise its game considerably on all fronts.