A Star is Born

A lot of actors, who’d like to dabble with being behind the camera, usually start off making their directorial debut with a modest project, just to dip their creative toes in the directing waters. Not so Bradley Cooper.

For his debut, he’s gone big. XXL big. For starters, he’s taken on a classic, whichever version you look at: this is the fourth, with the original released in 1937 with Dorothy Parker getting a script credit. He then signs up superstar Lady Gaga in her first major lead role. And he stars in it . Oh, did we mention he has to sing live a lot too? Yep, that big. Aw she can sing waaay better than me. I'm in trouble.

After a gig playing to the masses, singer Jackson Maine (Cooper), needs to unwind somewhere, with a drink. He gets his driver to pull over by a bar, which he pops into. It’s a lively venue, particularly as it’s drag night, so he sits down and gets his order in.

Up on stage gets Ally (Gaga), who’s a rarity on a night like this, being a woman allowed to perform as herself. It’s no surprise, considering how good she is, and Jackson goes back stage after to meet her. They end up spending the night together, and getting close, as Jackson lets Ally into his world.

So enamoured by her talents as a writer and a singer, Jackson invites Ally up on stage, in front of thousands, to sing a song she recently wrote. With phone cameras trained on her, her performance is soon up on social media, getting serious attention. This marks the start of her career as an artist, but with Jackson confronted by a number of demons, it’s not an easy route to the top. 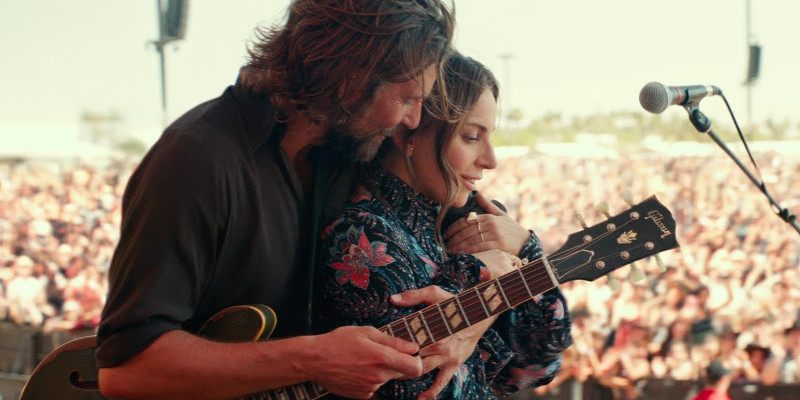 I invited a few friends over to hear you play - surprise!

Considering all the obstacles Cooper the director had to face, he doesn’t make a complete shambles of his debut.

The main problem essentially is that the premise, by definition of being a fourth remake, is clichéd. Famous singer meets fresh talent, who supersedes his own fame, whilst he struggles with various addictions. This means that the story is wholly predictable and offers no surprises.

And if that wasn’t enough, the direction does feel a little on the self indulgent side. There are a number of on stage moments that seem to linger longer than they should, as well as a few annoying camera angles to boot.

But here’s the thing. Cooper has an ace up his sleeve by way of performances by himself and Gaga – on and off stage. Gaga can do the singing stuff with her eyes shut, but she gives a stunning performance as Ally. And then you have Cooper, who can do the acting stuff – preferably with his eyes open – but it transpires he can also carry a tune.

It’s their absorbing on-screen chemistry that manages to paper over all the many clichéd cracks. Gaga had already dipped into acting, with various big screen cameos, and her recent role in the sixth season of TV’s American Horror Story, but she takes it up a level or two here. It’s her time shared on screen with Cooper that makes up for all the other disappointments, and as a result it’s these sparkly performances that make the film worthwhile.

And clearly Cooper now has the directing bug, as he’s helming and starring in an upcoming biopic on composer Leonard Bernstein. Hopefully his experience here will give him that extra confidence needed behind the camera.