It's funny how fickle the fates of some superheroes can be. And not just in the foes they face either. Take Peter Parker; the poster boy of superheroes if ever there was one.

Parker, AKA Spider-Man, has been one of the most enduring and popular characters to be produced by Marvel. The comics, cartoons and films have all proven to be a big money spinner for the web-slinger. The web crawler also made an impact in the noughties with his game series courtesy of Activision.

Meanwhile, in the DC Comics camp, the Caped Crusader wasn't getting the respect he deserved. The film series for one was struggling to capture the dark tone of the comics; it didn't really help that Michael Keaton was chosen to take on the role in the 1989 film, despite being directed by Gothic City's main boy Tim Burton.

And then Christopher Nolan came along with his new spin on Bruce Wayne, making Batman hot property once again.

We're now at a stage where a new Spidey game was released last month (Spider-Man: Edge of Time). Not that you would know it. After the success of 2009's Batman: Arkham Asylum, no-one is interested in Peter Parker anymore; it's all about the bat.

Developers Rocksteady Studios have widened Batman's criminal catchment area by leaving the asylum behind and to spread his wings over a good sized city. In doing so, Batman feels more at home roaming over the rooftops of this darkened city scape. It takes a little getting used to but after a while, using his glide and Batclaw, there's a real sensation of free-flowing movement throughout. 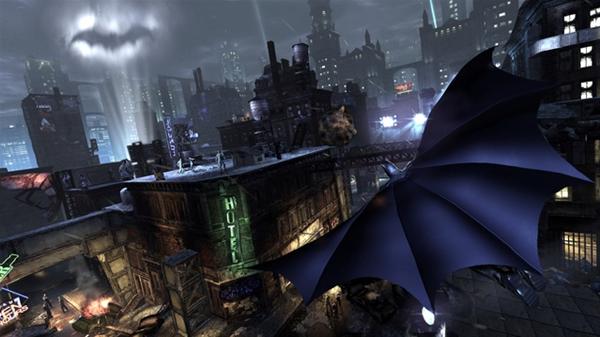 I've told Robin before about leaving that damn porch light on.

As with the first game, Arkham City has been scribed by Paul Dini, who has years of experience writing comics and animated shows (including He-Man and the Masters of the Universe and Batman: The Animated Series under his Bat-belt. Needless to say, the story is beautifully crafted, and is well balanced between being driven by both characters and storyline. These are all things that recent Spider-Man games have certainly been lacking.

The game looks and sounds fantastic too. Visually it looks like a comic book has just come to life, accompanied by a complementary orchestral soundtrack, giving it that cinematic sheen. It's not difficult to understand the huge amount of plaudits that the game has attracted. It's by no means the perfect game though.

The game certainly has its niggles. Nothing major mind, but enough to be disappointed by. The first is the map. It sounds silly, but there's a real hassle in not having an on-screen map available. Yes you can set up Bat markers to help you go in the right direction, but having to go into a menu just to see where you're going is a let down. It also doesn't help when you see that something you need is in the location you're at, but you can't see it. Chances are it's actually inside the building you've spent a good 20 minutes flapping your wings over, and you can't have access to that building at this time anyway. It's the kind of game you need to keep checking your map a lot too, as there is mucho going on, particularly with the many side quests.

Talking of which, these can cause a certain amount of confusion. When you have more than one side quest on the go, you may well find that on your way to one part of a quest, when another quest pops up that needs your attention. This new one may then lead you away from your initial destination. Which you will have to go back to if you want to complete it. This process can happen. A lot.

And then there is the main story quest. Many of its strands lead you inside a building, which then resemble the mechanics of the original game. Lots of stealth, hanging upside down, and picking off enemies one by one. Nothing wrong with any of this, thankfully; even if you might not be that big a fan of stealth type games, this one manages to just get under your skin, in a good way.

The niggle comes when your mission has taken you over every inch of the building you're in, ticking off your Bat to-do list, which normally ends with a boss battle. And once you've defeated them? Well, you have to remember how you got into the building in the first place, and try and find your way out. This means  you've guessed it  using your map a lot. Is it too much to ask that after spending ages hanging out in some huge building that you couldn't just be rewarded with being dropped off outside so you can go on your merry way? In one subway section, it took us longer to get out of the building than it did to complete the missions inside of it. This doesn't make for a happy batty.

None of these minor moans certainly don't spoil the overall awesomeness of this title. It just makes up for them with such finesse in other areas.

Combat for instance. The process could easily be described as button mashing; after all, only two buttons need to be continuously pummelled to get the job done. And yet so much effort has gone into it, giving Batman a fluidity when fighting that can make every individual fight battle almost original. He kicks, he strikes, he takes baseball bats from is opponents and uses them against them, all to great effect. It's one of those curious times when you're happy for you character to go actively looking for a scrap.

And even though there's no online multiplayer, there's still more than enough for you to keep grabbing your cape and going back for more. Not only is there the inevitable DLC, featuring extra campaigns for Catwoman, Nightwing and Robin, but there are over 400 challenges set by the Riddler that need to be solved within the game, if you so wish. On top of that, there are also separate challenges that can be unlocked, that see Batman take on a number of foes in various rounds in different locations for high score kudos. B-AAaam!!!! And with so many games relying more on more on the multiplayer side of things, this has to be considered the ultimate single player experience.

Spider-Man is truly going to have to raise his game if he has any chance of swinging his way back into the hearts of gamers. It will be far from easy however, because when the Bat signal is now turned on, with a new foe that will need defeating, it will be the Caped Crusader that we'll turn to, to get the job done.