Sometimes its easy for gamers to be swayed by reviews, particularly when so many are throwing plaudits at a title like confetti at a wedding. Letting the tidal wave of praise pass, its with a clear head we offer our verdict.

Believe it or not, Bayonetta isnt the best game ever made. Were also pretty sure that it wont be the best game of 2010, although it will obviously make it on to many of the best of the year lists. Thats not to say that it isnt fun to play, but to declare it as perfect would be way off the mark.

Lets cut to the chase  story. It just doesnt make any sense. Some games can get away with it, but Bayonetta contains so many cut scenes of great length, that theyre hard to avoid. It transpires that Bayonetta is some kind of witch who has lost her memory. She makes some kind of pact with the devil and then goes off to fight angels and whatnot. Its so poorly constructed; its like watching those really bad films they show on the Sci-Fi channel, where its awfulness draws you in. 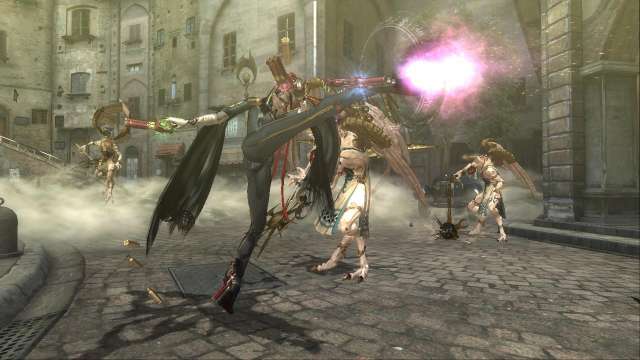 Oh my, I do apologise, that was one evil curry.

Despite the so-called story going off on all kinds of tangents, the reality is that you are left with a character that kills whatever is in front of her. No one can deny its beautifully presented with lots of polish, but at the end of the day it is just a beat em up.

Then theres the character of Bayonetta herself. Her prim, proper English mam accent is completely at odds with her dominatrix outfit. It would be like the voice of Lara Croft coming out of the mouth of Mario, its that wrong. And the fact that shes clad in clothes that look like they were sprayed onto her curvy frame  its 2010 people, arent we above all of that silliness now? Theres no reason for this character to be as titillating as she is supposed to be. And if youre aroused by a video games character in this day and age, then you really should be seeking professional help  either that or appear on the Jeremy Kyle show.

While playing through it, the camera can also be a little on the slow side to catch up with the action. With so many enemies coming at you, the last thing you want is a sluggish camera, hobbling about four paces behind you. But thats exactly what it does here.

Theres also a real sense of déjà vu with the enemies too. They all appear to be a little too similar to one another, which after a while, makes it feel like youre fighting the same one over and over again. To its credit, the same cant be said for the boss battles, which are varied and unique. Theres a scale of epic-ness about them, which at least makes them a joy to play through.

In terms of its fighting mechanic, its borderline mind-blowing. The combos on offer are like the toppings for a Subway sandwich  endless. For those who like to experiment, the possibilities can lead to some impressive finishing moves. At the same time, those button bashers amongst us can feel just as smug pulling off similar moves with random jabs at the controls. So both sides are catered for.

At times it feels like the game would feel right at home in an arcade cabinet. You can imagine some spotted oiks being drawn in by the flashy graphics and trashy music, drooling over Bayonetta and her outrageous curves (no wonder those carpets were so sticky under foot). After popping quite a few coins into her slot however, youd soon realise that the experience was all too repetitive and a bit on the shallow side.

For those with a deep connection with beat em up titles, this will appear to be your holy grail of gaming. Perhaps thats where many of the 110% scores are coming from; dedicated fans of the fighting genre, worshipping at the temple of Hideki Kamiya  who was responsible for Platinum Games releases Devil May cry and Viewtiful Joe.

Theres also the total absence of multiplayer to consider. If this were any other major title, it would have been slammed for that omission; as it stands though, it appears many have been happy to overlook it. 100% and no multiplayer eh? Hmm...

Ultimately though, to the average (non Viewtiful) Joe on the street, the game feels more stylised than stylish. It plays well when it allows you to do so, but theres an awful lot of dour dirge to sit through before you get there. Dont believe hype; at the very least give the demo a whirl and make your own mind up.

Dont get us wrong, theres some real fun to be had here. Were just disappointed that so many reviewers went clearly over the top with this title, declaring its arrival with the kind of fanfare you would expect to accompany that of news of the second coming. It is not a holy experience. It will not change the face of gaming as we know it. Its a pretty beat em up  but really not much more than that.