If you are not familiar with the music of The Beatles, all that can be said is, welcome to our planet. The rest of us, even those that dont own any of their albums, can at least rattle off a few of their greatest hits  many of which can be played here.

And thats part of the beauty of this game; youre never that far away from a song that you actually know. The problem with a lot of the latest artist/song choices that make up recent Rock Band/Guitar Hero titles is that with each subsequent release comes the addition of more obscure/bland tracks to play. At least with this kind of collection, you know its a Weezer/AFI/Blink-182 free zone. Thank God.

At the heart of the game is its Story mode, which takes you through the amazing career of the Fab Four; from their early days at The Cavern club, right up to their roof-top shenanigans on the Apple Records building. As usual, each section you pass, opens up another section. 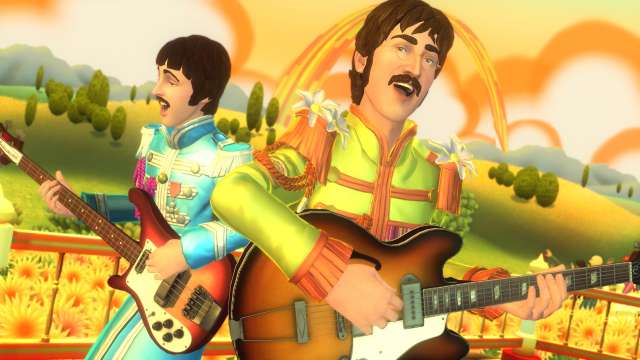 What makes this more appealing than usual are the extremely high production values. The artwork and animation that appears in the backgrounds are superb, with some amazing textures and colours. The irony is of course, whilst playing the game the chances are youll notice none of them, as youll be too busy stringing all your notes together. Still, better to be in than out we say.

Theres a good mix of songs from their collection as well, with 45 tracks included. For die-hard fans its probably a solid selection chosen from a huge back catalogue. However, for those who enjoy the bands music, but wouldnt consider themselves fans, there are quite a few songs that might be unfamiliar. And sadly, quite a few noticeable omissions which include Help!, Penny Lane, Eleanor Rigby, Yesterday etc. All of which, no doubt, will sadly be appearing as downloadable content at a price in the near future.

One thing clearly evident from the game is that playing it on Easy mode is anything but. It seems that with the release of every new title, Easy gets that little bit harder. This is no bad thing, although it scared us enough to go nowhere near Expert level. Yes, thats right, were wusses. It certainly wont spoil your enjoyment of the game, but if youre a casual gamer  or simply just left handed with sausages for fingers  playing the game on another level may well cause either physical or mental damage.

Another thing that makes it obvious that this game was a labour of love are the rewards for unlocking certain challenges throughout the game. Players are treated to photos, as well as rare footage of the band, even the inclusion of their 1963 Beatles Christmas Record which was a limited release sent out to members of their fan club.

Of course if you dont have all the instruments (or simply dont have enough friends to play them), you can meet up with other band members online. The great feature of this is that each band member can choose their own difficult setting, so you dont have to show yourself up in front of a bunch of hardcore players, who wouldnt be seen dead playing at anything less than Expert level. And even if you dont know them, you get a sense of camaraderie as everyone tries to play their best for the good of the group.

As the band put it themselves, All You Need Is Love, and this game is brimming with it. Its an excellent addition to the Rock Band series, proving that with the right band on board (unlike say, ahem, Metallica) a game featuring just one band is not only plausible, but if done correctly, can be just as entertaining, perhaps even more so, than the current mixed bag compilations being released.

Of course none of us will ever truly understand the phenomenon of Beatlemania, but playing this game certainly comes close.