Music – you love it right? Sure you do, and you pride yourself on your eclectic tastes in different genres that make up your playlists. A little bit of this, a sprinkling of that. Chances are however, that there are some musical styles that just don’t float your rockin’ boat.

One of the harder genres that the masses struggle to swallow is opera. And quite right too. It’s elitist, pretentious noise that the majority of those that claim to like, do so only to appear suitably poncey. So a film that has a famous opera singer held hostage may hold a certain kind of perverted pleasure. Sadly, it’s the only kind of pleasure you’re likely to get from Julianne Moore’s latest. 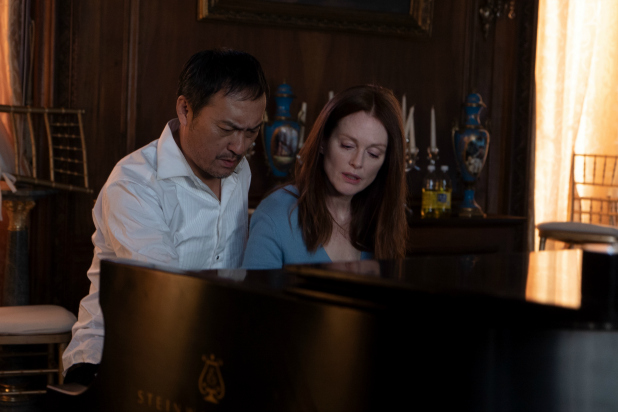 I don't understand - how are the keys moving by themselves?

Leaving Tokyo for South America is successful businessman Katsumi Hosokawa (Ken Watanbe). It’s supposed to be a serious business trip, but Katsumi has no real interest in making a deal. He’s making the long-haul trek for one reason only: his favourite opera singer Roxanne Coss (Moore) has been booked to perform.

As dignitaries from all over gather in the mansion, the party is abruptly interrupted by an armed political guerrilla group. They hold everyone within the mansion’s walls hostage, stating that they will only be released once their demands have been met.

But with the government unwilling to negotiate with them, the hostages find themselves bedding in with their captors for an uncomfortably unknown length of time. 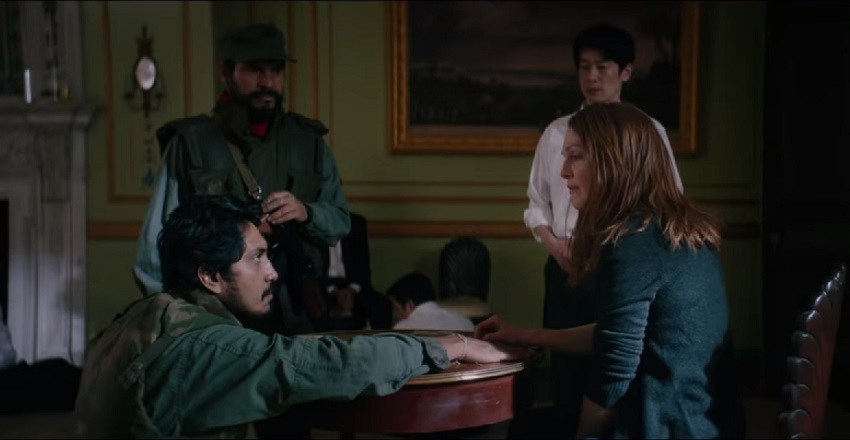 Unfortunately your grand-mother's table is worth about a fiver.

Based on Ann Patchett’s novel of the same name, Bel Canto is the type of film that, due to the bizarre nature of its story, you wouldn’t be surprised to see it announced in the opening credits that it was based on a true story; after all, fact is so often stranger than fiction. The biggest surprise however, and disappointment, is not only is there no such declaration, but that someone actually went to all the trouble of making this nonsense up.

Firstly, there’s a wholly unconvincing relationship between Moore and Watanbe; they have about as much chemistry on screen as a piece of coal on a toasted crumpet. There is no sense of a sensual relationship developing between them, which makes it more difficult to accept when they do hook up.

Oddly, the real heartfelt relationship is between two other characters, that get drawn into a Shakespeare rip-off, with the difference being that the Capulets just so happen to be South American guerrilla rebels this time around.

And talking of unconvincing, Moore, as good an actress as she undeniably is, can’t lip sync for shit. Whenever she has to perform an operatic tune, it’s as if she’s performing some kind of silent karaoke. Badly.

Director Paul Weitz, who has come a long way since his debut (1999’s American Pie), struggles with many of the elements on show here, but does almost make up for some of his errors with a confident ending. Until he makes the mistake of having Moore pretend sing yet again.

It has some interesting characters, many of whom are engaging, but Weitz either forgets or simply ignores one of the golden rules when it comes to portraying an event as real – subtlety.

Ultimately, regardless of what kind of music you love, it hits too many bum notes.