With his classy accent, you’d be forgiven for thinking that Kenneth Branagh was anything but an Englishman through and through. The fact is, he was actually born in Belfast, Northern Ireland, and didn’t move to England until he was 9 years old.

The time he did live in Belfast, during most of the sixties, was a time of turmoil that saw violence on the streets, as the city found itself split by a religious divide between Catholics and Protestants.

This then is a semi-autobiographical look back at this turbulent period of history, as it follows a family coming to terms with their community turning on one another and the fallout from it. 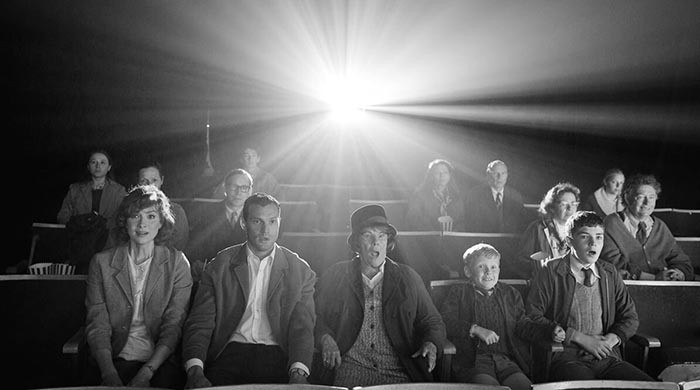 No one was more surprised than Dame Judi at the screening of a very early erotica role of hers.

Living in a working class street in Belfast is 9 year old Buddy (Jude Hill) and his family. They happen to be Protestants, as are most on their street, but there a number of Catholics who also live there too, in relatively harmony. Until now.

A growing number of Protestants in the area are unhappy with the Catholics living in their community, and start to display their feelings aggressively. This leads to a level of violence that the city, nor the country, has seen before, destroying communities that once lived side by side in peace.

It’s not an ideal time for civil unrest for Buddy, as he’s just discovering girls, and bricks through windows and barricades aren’t exactly conducive to promoting love in the air.

His Pa (Jamie Dornan) has to work in England to make decent money for his family, meaning that Buddy’s Ma (Caitriona Balfe) is on parent duty full time looking after Buddy and his brother Will (Lewis McAskie).

With the troubles looking unlikely to stop anytime soon, and with the family being approached by local Protestant leader Billy Clanton (Colin Morgan) to do more for the cause or else, they have to start to consider difficult alternatives for the safety of them all. 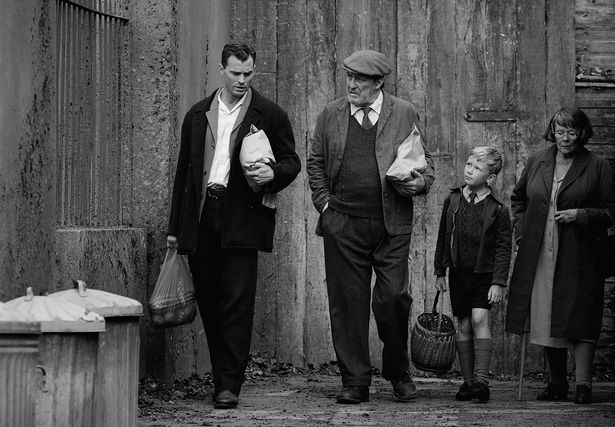 So I think I ordered something from Wagamama, what did you get?

Although this is billed as a semi-autobiographical story, Branagh is keen to make audiences aware that Buddy’s journey is similar to his own: Buddy has a love for cinema, and goes on a regular basis; he also enjoys superhero comics, and is seen reading one in particular that saw Branagh himself bring to the big screen.

Technically, Belfast is a beautifully crafted, framed and shot film. Its black and white presentation enhances the period of the time, giving it a built-in classic feel.

It also has an impressive cast that also includes Dame Judi Dench and a splendid turn by Ciarán Hinds. Hill, making his acting debut, certainly shows an impressive level of confidence in the role, but does come across as a little too exuberant at times, no doubt from all the praise he got on set, which means that there’s little room for subtlety in his performance.

So the film has a lot going for it, and yet it struggles to really stand out. Firstly there’s the rather soft representation of the conflict itself. Although there are windows smashed and a car blown up, no one is seen to die from the violence, which feels somewhat of a cop out.

And then there’s the script itself, written by Branagh, that although it has its charm, it’s all rather one note, lacking either real, striking drama or genuinely laugh out loud moments. And considering the distinctive humour the Irish have, it’s peculiar that it’s heavily overlooked here.

Branagh clearly has a lot of affection for this period in his life, it’s just surprising that he didn’t push the material that little bit more, as it lacks any kind of edge.

Considering the undeniable talent behind this film, Belfast is disappointingly safe, despite its visual palette, held back by a script that is nothing more than functional. What it lacks is genuine craic, which is almost unforgiveable.