There’s nothing more important than family, apparently. That’s certainly a recurring theme that cinema likes to bang on about a lot of the time. And the film industry should know, considering how nepotistic it is.

To prove this point further, director Peter Hedges casts his own flesh and blood son Lucas in the lead role of his latest feature, alongside third cousin removed (possibly), Julia Roberts, in this family drama. 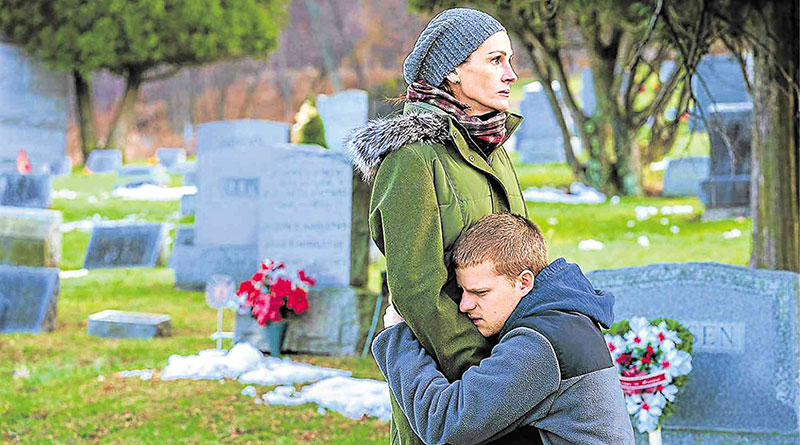 I take it all back, I loved Pretty Woman!!

The appropriately named Holly (Roberts) and her family are pretty much ready for the festive season ahead. Just as they’re putting the final touches to their holiday plans, they get a surprise visitor in the way of Holly’s son, Ben (Hedges).

His arrival is unexpected as he was supposed to be in rehab for his drug addiction. He tells the family it’s OK, as his sponsor told him it would be a good idea to surround himself with family. Although pleased to see him, Holly is concerned that neither her son, nor the rest of their family for that matter, are quite ready for this reunion.

She agrees to let him stay, but only on the understanding that she never leaves his side. It’s not long however, before his arrival in the community he treated abominably under the influence of drugs, takes its toll on the entire family. Ha - he thinks that people are watching him...

Boundaries are there to be pushed, and it’s evident here that director Hedges was keen to push those of the family drama. His script is certainly darker than the usual movie of the week, as proven with Roberts using a fair amount of profanity throughout, but sadly it’s just not enough.

The second half of the film embodies A Christmas Carol to a certain extent, with Ben facing a kind of ghosts of Christmas past experience, as he faces those he did wrong during his drug-fuelled days. Not only is it jarring, but it’s also a tad corny. The film then goes on to attempt to show the depravity of being a drug user, but amounts to nothing more hardcore than being PG friendly.

What it does well however is highlight the talent of Roberts; she makes the gig of a mother looking out for her drug-addicted son look easy, and radiates effortlessly throughout. So the one message you may come away with from this film might not be the one that either Hedges would necessarily want, and that’s simply this: Julia Roberts is a pretty good actress and it would be nice to see her strut her stuff in more films. Oh, and maybe just say no.

If Ben is Back were a family member, it would be the one, although pleasant enough to your face, never really had anything of worth to say for themselves. It’s certainly not the black sheep of the family, that’s the one you really need to watch.