There’s a saying ‘be careful what you wish for’. This can certainly be dangerous in regards to film, with audiences clambering for more after being whipped into a frenzy by a cinematic offering.

In some cases it works, as in 1991’s Bill & Ted’s Bogus Journey, which was a fitting sequel to the 1989 original. But a sequel to that sequel, nearly thirty years on, is surely even too much of a stretch for these time-travelling dudes? 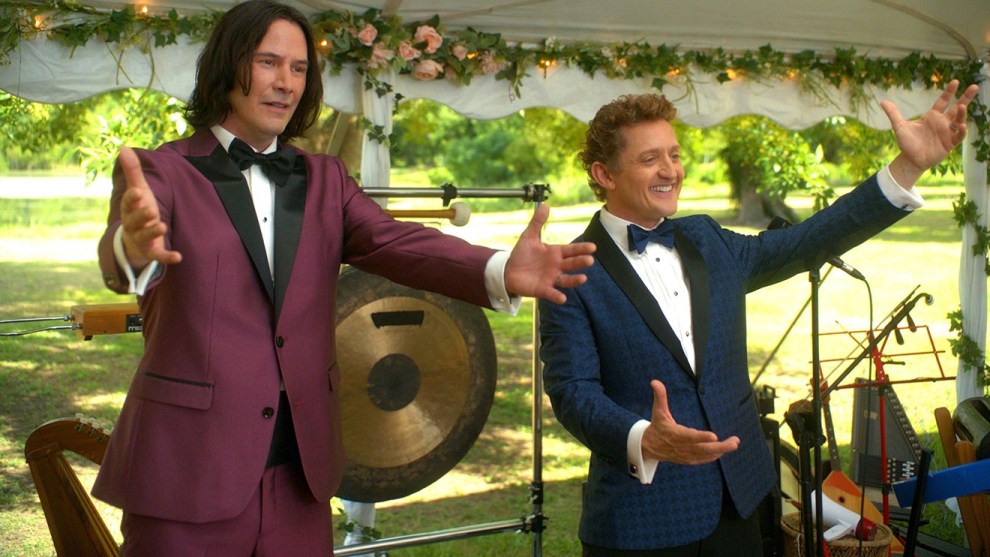 No one was expecting a lounge set from the Wyld Stallions.

Despite having time-travelled extensively in their youth, and being told they save the world with their music, the prophecy has yet to materialise with the members of Wyld Stallion now middle aged.

This has put a huge amount of pressure on their marriages, still to the princesses they brought back from their travels, as both are now in counselling. It’s not all bad news however, as they now have a daughter each Billie (Bridgette Lundy-Paine) and Thea (Samara Weaving), who adore them both and their music.

The pair are then visited by Kelly (Kristen Schaal), the daughter of their old friend Rufus, from the future. She takes them back to the future to face the counsel yet again. It’s there that they are told that the situation is really quite grave, and that they only have until 7.17pm that night to come up with the song, otherwise time and reality will cease to exist.

With no inspiration whatsoever, they come up with the idea of travelling through time yet again, this time into the future to meet their future selves, so they can get a copy of the song and bring it back. But as they soon discover, time isn’t necessarily on their side. 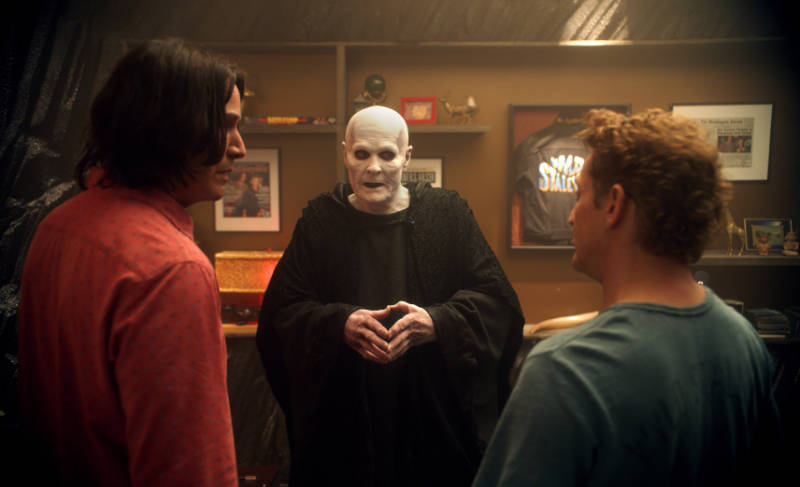 The thing is, it's not the death of your bodies tham I'm here for. It's more to do with your careers...

With it being nearly thirty years since their last adventure, it’s a heavy mixture of both a fondness for the original members of Wyld Stallyns and curiosity that will probably lead you to this feature.

The result is sadly as you would expect, somewhat of a mistimed adventure.

Firstly Winter should be commended for enthusiastically throwing himself back into the role. Reeves however, not so much. For the most part, Reeves comes across as awkward and out of sorts as Ted; he has a look about him of someone who would be more comfortable working in a bank than still trying to pursue a music career. In fact it feels more like Reeves doing a rather embarrassing impersonation of Ted, as opposed to an older Ted in the flesh.

The script is on the wafer thin side too, as it essentially amalgamates the two previous instalments into one, with both recruiting historical features from the past, and getting involved with Death again, featuring heavily.

The film itself appears to realise this, as it almost apologetically runs out of steam for the final third and delivers a truly underwhelming finale.

And yet given all this, it’s still a joy to see the pair return. Sure they deserved better, but there are elements that have a sparkle about them, mostly when they meet future versions of themselves.

Unfortunately including daughters does nothing for the film. Their impersonations of Bill and Ted, which is essentially what they are, are on the bland side, and a unreasonable amount of screen time is given to them and their particular mission. The thing is, no one wants to see a Bill and Ted film with the focus off of Bill and Ted.

And although original creators and writers of the last two outings, Chris Matheson and Ed Solomon, wrote this script, this film lacks the rhythm and cohesion of the last two.

Soon the fascination for how the modern world would treat Bill and Ted is swiftly replaced with disappointment, and for all those that wished for a return, probably now wish that they hadn’t. Time really can be that cruel.