Time can indeed be the cruellest of mistresses. One such pertinent example of this can be found in cinema. Films often deemed ‘classic’, can look embarrassingly dated a little further down the road. One specific genre that can suffer from this more than most, ironically enough, is the time-travelling flick.

Here we set the dial back to 1989, which is where the most excellent duo Bill S. Preston Esquire and Ted “Theodore” Logan, first air guitared their way onto our screens, with their debut time-travelling antics. But thirty-one years into their future, how cruel has time been to them exactly? 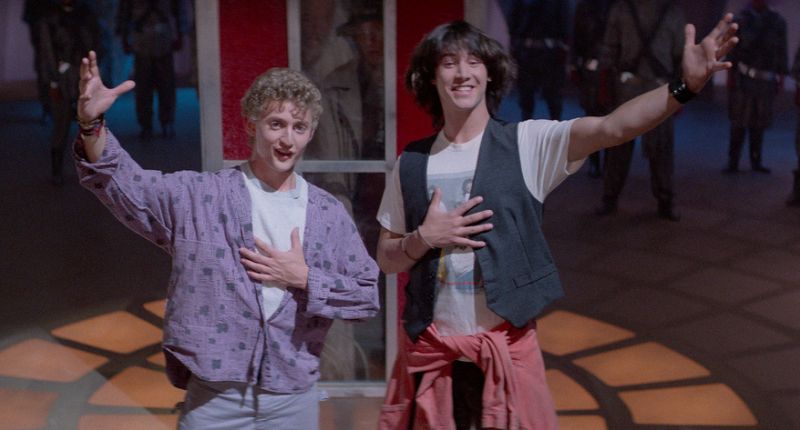 The pandemic made casual the new everything.

1988, in the town of San Dimas, California, and students Bill (Alex Winter) and Ted (Keanu Reeves) are fast approaching graduation. Unfortunately for them their grades have been poor, and the way only for them to graduate is to pass their history class, which isn’t looking good. If they do fail, it will put both their futures in jeopardy, as their dreams of becoming rock gods in their band Wyld Stallyns will be denied, with Ted being sent to military school.

As they ponder their fates, in the car park of a convenience store, they are approached by an intriguing gentleman by the name of Rufus (George Carlin). He informs them that he is from the future, and that it is of the utmost importance that they pass their history test. If not, it will have dire consequences for them.

He gives them access to a time machine, which looks like a regular phone booth, with the directive of travelling through time to meet historical figures. Despite not being the brightest bulbs in the pack – they’re about to flunk high school after all – they still manage to comprehend the severity of the situation, so enter the booth and begin their time-travelling adventures.

None of the time travellers were fully prepared for a naked Hitler.

Once you get over the initial horrific realisation that it’s been 31 years since the film’s initial release, you can then begin to appreciate how well this comedy has aged.

Of course much of it is down to the winning performances of its fresh-faced stars, which helped make Reeves an international star, and Winter, well, if nothing else, an iconic screen character. The pair are surprisingly endearing even now, with their empty-headed but always cheery personas.

What has also held up is the trippy script. Considering all the issues that time travel can raise – as perfectly demonstrated by a certain Marty McFly and his DeLorean – the script strips all the science back to a bare minimum, and simply relies on the silliness of the story to hold the attention, which it still does admirably well.

It’s actually in its representation of social attitudes where it hits the occasional bump in the road, with a spot of uncomfortable homophobia and sexism. Still, the film offers a disclaimer at the start, just to warn you of such unpleasantness, but it’s nothing worth starting a hash-tag over.

Director Stephen Herek keeps the action zippy, squeezing quite a lot into the film’s 90 minute running time. He should also be commended for making his historical figures speak in their original accents, forcing the public to read subtitles in a mainstream comedy.

As far as the 4K version is concerned, it only highlights the fragility of film, as well as the limitations the film had as far as special effects were concerned. But when your protagonists travel around in a phone booth – a clear nod to a certain Doctor’s TARDIS – the film deliberately focuses less on the science and more on the fiction. And as the first two instalments of Back to the Future had already been released before this, Herek played it smart by just letting Bill and Ted do their thing.

Whatever happens with the newest adventure for the pair, this original outing, with its adorable characters and fun and amusing predicament, means that even thirty-one years on, Bill and Ted have done really rather excellent to stand the test of time.