Welcome to Rapture; a city thats a bit like Butlins but under water. A place that held such promise but fell violently apart, leaving behind a community of oddities and freaks  again like Butlins.

This adventure takes place eight years on from the first, apparently in an alternative 1968. This time however, you play a character that wakes up and finds himself inside a Big Daddy  one of the main, weightier enemies in the original  with no memory at all.

It transpires that he is subject Delta, a prototype for all Big Daddies, who was forced to commit suicide by Raptures new ruler Sofia Lamb, who informed him that the Little Sister he was paired with was actually her daughter Eleanor. Ten years later, he wakes up, and starts to receive psychic messages from Eleanor for help. And so begins your adventure to rescue her, through the dystopia that is Rapture. 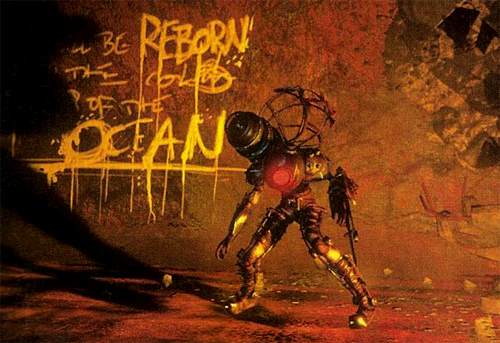 Again with the graffiti!! If i find out who's doin' it, there'll be hell to pay.

Anyone who played the original couldnt help but be blown away by its visual splendour. With this second outing being set in the same location, theres a fear that fans of the series may be disappointed with how similar it all looks and feels. However, the environments are created with such remarkable attention to detail, its difficult not to marvel at them, regardless of whether you played the first one or not.

Rapture is a gloriously impressive setting. The decor is a major nod to all things art nouveau, while incorporating a sinister sheen lifted from something like The Shining. Just exploring each area can take your breath away; not that you have that much time for sightseeing mind, as the place is riddled with aggressive inhabitants.

Playing this time round as a Big Daddy is nothing short of a stroke of genius. You get to carry a vast assortment of weapons, as well as huge range of special powers known as plasmids. You also feel a physical weight to your character, without it ever feeling cumbersome. Theres also a very nice touch if you move quickly, particularly when youre under water, as you can just catch glimpses of the outer edges of your diving helmet.

Just as well there are plenty of weapons to carry as you sure will need them. At times, you can be literally swamped by foes, and if you havent taken the right precautions where buying ammo is concerned, you could soon be swimming with the fishes. Ammo can be picked up from corpses  along with money, tins of meat and other bits and pieces  but usually only in small amounts. To be on the safe side, buy as much as you can carry from the many ammo points throughout the game.

Theres a nice variety of weapons to play with too. Shotgun, rivet gun, drill, machine gun, spear gun and launcher. All can have up to three variations in ammo too. For instance, if you upgrade the rivet gun to the maximum amount of three times (as all weapons are), your rivets can then set enemies alight in flames. Bar-b-q time!

And just as you need ammo for your weapons, you need to pick up Eve to keep your plasmids topped up. And trust us, youll need plenty of it. Not just because its a great way of dispensing enemies, its also a hell of a lot of fun to do. There are nearly as many varieties of plasmids to make Heinz jealous. There are ten in all (plus an eleventh bonus that can be picked up later in the game), but you can only carry a maximum of eight at any given time. These can be swapped around quite often by visiting the Gene banks littered throughout.

We didnt bother with a number of them though, as its far too easy to get sucked into using your favourites. For instance, a swarm of bees wouldnt be the first choice for a lot of folk, but seeing your foes waving them off in a crazed fashion never failed to entertain. As did setting them on fire, freezing them or shooting their evil arses with electro bolts. The list goes on. Oh and did we mention you can even use one to turn your foes against each other? And flicking back and forth between regular weapons and plasmids is just a joy. 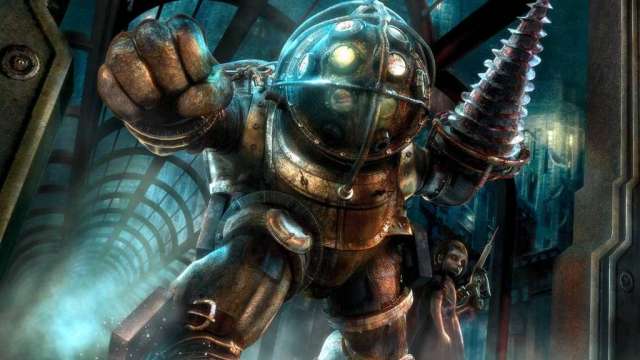 I don't believe it it's happened again - the zip's gone on this thing. Anyone have a tin-opener?

You do have to be careful in places though; its easy to be caught out and have a far greater number of enemies after you than you have ammo for. Thankfully though, there are not only many re-spawn spots (known as vita chambers), but when you get into a bit of a pickle with one of the major enemies  namely Big Sisters, even if they manage to kill you, when you return to fight them, the damage they took from you will still remain, making it less of an uphill struggle to finish them off.

Theres also quite a bit to do in your quest to find Eleanor. The main thing you have to stay on top of is the Adam situation. Adam can be acquired if you take a Big Daddy down; the Little Sister with him can either be harvested for mucho Adam, or adopted, whereby you can carry her around and she will help you harvest Adam from other baddies. The upshot of the Adam is that you can purchase anything from extra plasmids, to extra slots for plasmids tonics (basically boosts for items you already have) etc.

What also stands out is the quality of the story. The narrative pulls you along through all the different sections of Rapture; at times its not always clear whats actually going on, but youll be having so much fun, you wont rightly care. Also, the end youre treated to will be decided upon some of the choices you have made throughout the game. Not that you would need much of an excuse for another play through mind.

Not only does the game drip to the walls with atmosphere in a visual and audio sense, but the music choices (usually used for only loading points admittedly) are spot on too.

The only real disappointment about the game is that it wasnt long enough. Although this may have more to do with the fact that we couldnt stop playing it, rather than it being on the short side.

But unlike the first game, your Bioshock 2 experience doesnt end there, oh no. Welcome to Rapture, multiplayer style-y.

The idea of multiplayer Bioshock game initially filled our hearts with dread. Much like the drill you carry with you, it felt like it would be something bolted on for added value appearance. Thankfully thats not the case.

Compared to the single player experience, theres something rather more silly and cartoonish about the multiplayer. And lets face it, with all those great weapons to play with, why shouldnt it be? You can choose one of six splicers to play as, and fight it out in seven different modes. It may not be as comprehensive as something like COD, but it doesnt stop it from being any less enjoyable. The only downside we found with it was getting a game. Waiting for enough players to join a game seemed to take forever and a day on the various times we played. We just hope that its not down to folk ignoring the multiplayer side of the game. If thats the case, then theyre definitely missing out.

It is of course early days as far as 2010 is concerned, but Bioshock 2 already has to be a serious contender for Game of the Year. Everything it does, it does so damn well. So whos the Daddy? We think we already know the answer to that one.