There's a definite, tangible shift in the gaming world that is seeing a rise in multiplayer gaming. In recent years, games that were considered single gamer experiences have now had multiplayer elements attached. Just look at the most recent God of War entry for instance, which is more of a multiplayer game with an almost token gesture of a single player campaign tagged on.

Regardless of what the current trend might be  or more accurately, what we're told it is  you just can't beat a good old single player experience. And they don't get much better than this.

This third instalment in the BioShock canon leaves the watery setting of Rapture far behind, as it flings itself gloriously skywards, into the clouds. 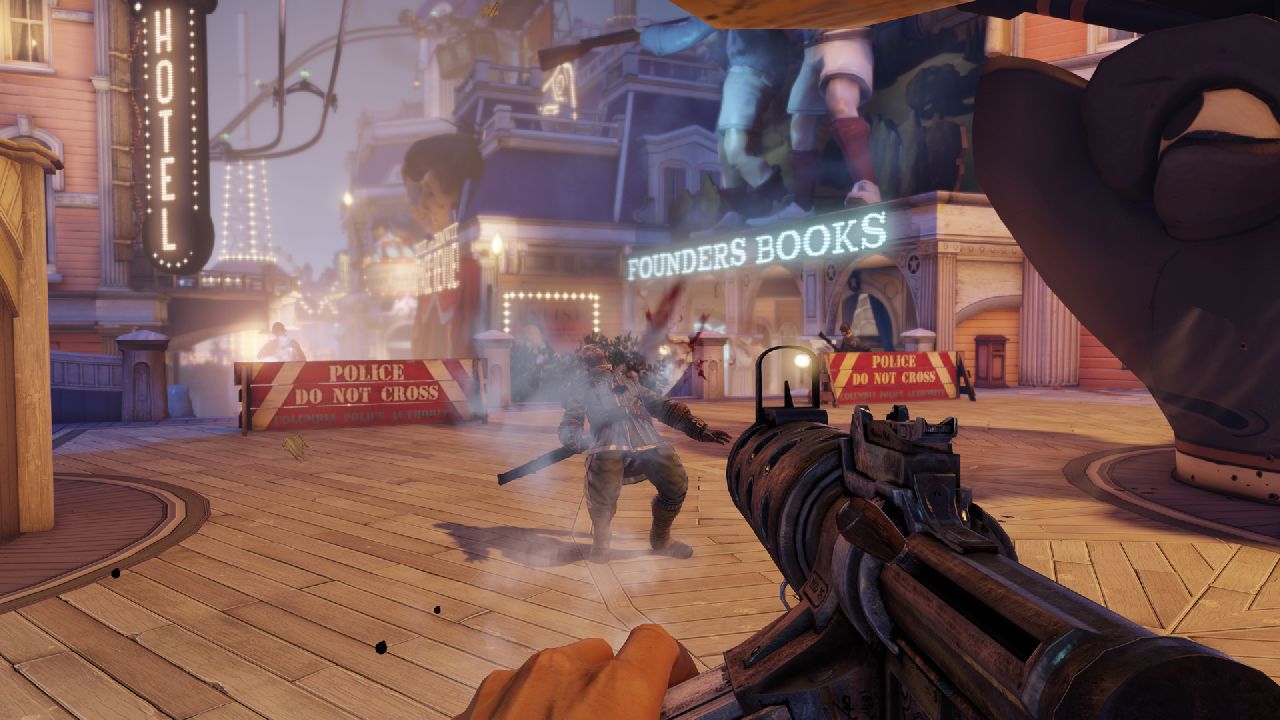 I've heard that Founders Books has a great sale on and nothing's gonna stop me from checking it out.

Where Rapture was a dark, dank place, the world of Columbia is brimming with light. The main protagonist is Booker DeWitt, who after arriving at a lighthouse on a rowing boat, soon finds himself catapulted into the floating city of Columbia. Initially, it looks like a swell place to visit, with a carnival vibe about the place.

Booker isn't there long however, before the deepest of cracks begin to appear, where two differing groups  the Founders and the Vox Populi  are clashing in an ever-growing socio-political storm. Despite this civil unrest, Booker has a job to do. If he manages to find a young woman by the name of Elizabeth, his debt with those who have employed him to bring her back to them will be wiped clean.

But Booker soon discovers that Elizabeth is special. Although initially fragile, he realises she has incredible powers, including the ability to tear through time into an alternate universe. And the more time he spends with her, the more he struggles with the concept of whether or not he's ultimately doing the right thing.

Although BioShock Infinite is at heart, a first person shooter  and can simply be played as such and be just as rewarding  it is a game rich in textures and complexities. It's themes of race, religion and community are all integral parts to its overall success, for it is a game that isn't only driven by its story but defined by it.

And yet it still manages to feel a part of the magnificent BioShock family; yes it's set in a lighter, brighter world, but the use of weapons and vigors (psychokinetic powers that are collected throughout the game, that can allow you to attack your enemies with the likes of fire, water, electricity, as well as a murder of crows) are a constant reminder that this is indeed a BioShock game.

The idea of having a co-character follow you around for the majority of the game may sound a little off-putting, but Elizabeth turns out to be the most impressive of companions. For a start, she's a fairly independent character; she may never be that far away from you, but she never feels like you're joined at the hip. She can also take care of herself, so there's no need to check a health bar to make sure she's doing OK. In fact, she's quite the opposite; if she finds you in trouble, she'll help you out by throwing you some ammo or even some valuable health supply.

But almost more importantly than that, it's her unique story that drives the whole game. And as it progresses, you realise that the relationship you build with her on your journey together, is clearly an important one.

The extra colour comes from the political tension that grows around you in Columbia. It eventually reeks of misplaced patriotism that stirs a disturbingly taut racial hornet's nest. And with you and Elizabeth caught up in the middle of it all, it makes for an absorbing and enthralling storyline.

It's also one of the rare times in gaming where you won't mind scavenging around down bins and rooting through draws for healthy snacks, ammo etc. which is just as well, as you'll be doing it a fair amount.

Perhaps the only drawback in the entire game is the balance between a nice arsenal of weaponry, and the use of vigors. In previous games, the use of Plasmids was an integral part of the shooting experience. In BioShock Infinite however, using the vigors is definitely on the fiddly side, particularly in battle where you have to bring up their menu with the left shoulder button, which in practical terms may see you relying on the old-fashioned weapons at your disposal, just for ease of use. It's a small price to pay however, for everything else the game delivers.

It's a deep and thorough campaign that has the rather unique ability of having you right on the edge of your seat whilst playing. And no, there is no multi-player mode, but it's the type of game where it simply isn't needed or necessary.

BioShock Infinite is the epitome of what a single player gaming experience should be about, and so much more. It brings to life a breathtaking world that allows you to take your time and discover and explore all it has to offer. It's so immersive that you really feel a connection with Columbia and all its inhabitants, as well with the game as a whole itself. And yes it's a single player experience, but thanks to Booker, Elizabeth and the rest of the population, you never feel alone.

Columbia may well be the very definition of cloud cuckoo land, but it's an environment that offers gamers a fairly unique experience in being both cerebral and a true blast to play. Just remember when you take Elizabeth's hand, hold on tight, because you're in for one hell of ride in the sky.