You need patience to be an Avenger; it is a collective rich with characters, with more than one or two egos at play. But if you bide your time as a team player, helping to save the world along the way, then chances are you will be rewarded, as Natasha Romanoff has been here.

After supporting various team members in eight features, Romanoff finally gets what all Avengers dream of, the solo back story. 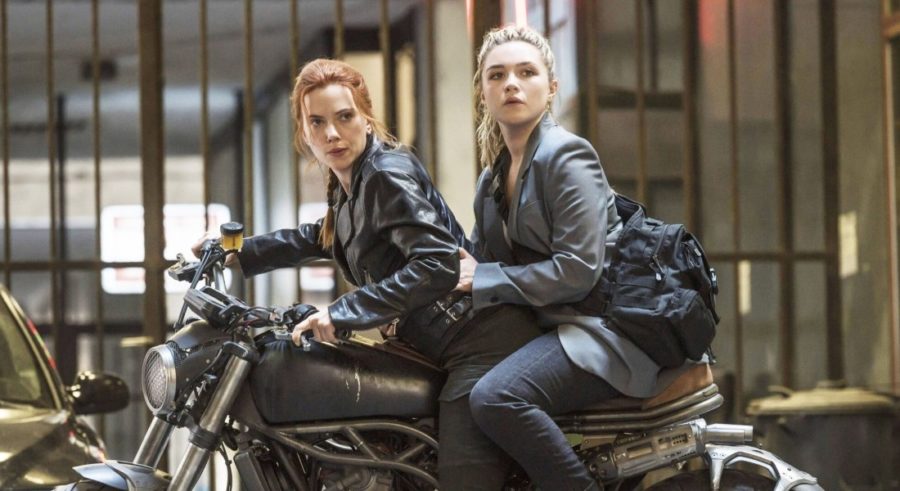 Oh, it looks like the road is open after all, so we don't have to jump the river in a spellbinding fashion.

Finding herself a fugitive on the run after violating the Sokovia Accords, Natasha Romanoff (Scarlett Johansson) heads off to the wilds of Norway. It’s a safe place, but not for long, as she soon packs her bags, including a fair amount of mail she’s yet to go through, and heads off elsewhere.

She hasn’t gone far before her car is attacked by an unknown assailant, who appears to have all the tech gear and every idea on how to take her down. Natasha soon gets the impression that they’re not out to kill her, but rather take off with something she has, specifically a package that was sent to her. She manages to grab it and high tail it out of there before her opponent has the chance to do otherwise.

On opening the package she discovers vials of a red chemical, sent to her by Yelena Belova (Florence Pugh), the closest thing to a real sister that Natasha has. The pair reunite in Budapest, but it’s not quite the perfect family reunion. It is there however that Natasha learns that their past is quickly catching up with them both, as an old adversary of theirs is still apparently alive, and that their facility for brain washing – the red room – is still very much in operation.

Natasha and Yelena soon find themselves working together, but their mission soon turns into a truly family affair. 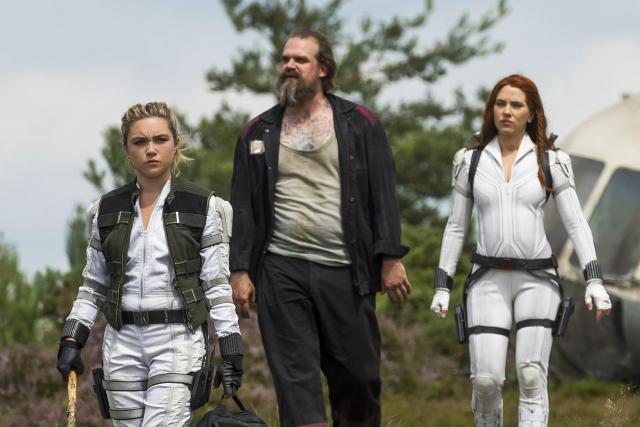 I know they aren't the Stormtrooper cos-play outfits you wanted, but the'yre close enough!

If you’re a die-hard fan of the MCU then the following won’t come as any surprise to you – Natasha Romanoff is dead. This is only a spoiler if you haven’t seen Avengers Endgame, where she was seen to sacrifice her life to save others. Of course it’s debatable if the character is actually dead, after all, comic book superheroes have more lives than the proverbial cat, so there’s every chance she’ll be resurrected one way or another in the future.

But one way of getting around the whole being dead thing, is by having a story set between Avengers: Age of Ultron and Endgame, when Black Widow is alive, which is pretty smart.

And although touted as an origins story, this is more of a semi-origin, as it doesn’t focus much on Natasha becoming the Black Widow. Instead, the brief flashback to her childhood is all that's needed to inform the audience of where the character is currently, particularly where her family is concerned. This allows for her parent figures, played admirably by David Harbour and Rachel Weisz, to make more of an impact on her life at this exact period of time.

The result is more a film about a dysfunctional family, rather than a superhero flick. It’s this family dynamic that is the most entertaining aspect of the film; both Harbour and Pugh show great comic abilities, helping to keep a welcome lightness of touch throughout the film.

Where the film isn’t as successful is in its telling of the rather loose story regarding the evil enemy Dreykov, played by Ray Winstone, and his criminal empire. Firstly, it should be said that virtually all the Russian accents attempted in this film are fairly dubious, but Winstone’s in particular is woeful; he may have a physical presence in a film, but he certainly proves here that he doesn’t have an ear for languages.

It’s also disappointing how little the Red Room, and those that currently find themselves being trained there against their will, feature. Certainly more could have been made of the new recruits, who from the times we see them, look like they’re auditioning for an update to Robert Palmer’s classic “Addicted to Love” video.

Still, Australian director Cate Shortland, who up until this point has only helmed three indie films, steps up to the big-budget plate in style and delivers. There are some impressive action scenes, with the only criticism being that many of them, especially the car chasing scenes, feel more like Bond set pieces rather than ones from the MCU, but perhaps she was subconsciously auditioning for her next gig, which is fair enough.

It’s also not her fault that Natasha Romanoff has no special powers; although she’s a member of the Avengers, her skillset is that of being a spy, and her DNA is very much human. It doesn’t stop Shortland pushing the boundaries of what’s humanly possible however, in an attempt to give it some much needed Avengers colour.

Although the main story arc is a little lame, this film scores highly for its unusual family dynamic and the relationships within it. Pugh is supremely good fun, and it’s good to know that she will be making a return soon in the next Disney Plus series Hawkeye.

It’s unclear where Johansson stands in the MCU after this, with her character being dead and all, especially as this feature feels somewhat of a swansong to the Black Widow. But whether either Johansson, or indeed the Black Widow herself, return or not, at least Johansson got her origins story, which just so happens to be one of the most enjoyable and exciting to come out of the MC Universe in some time.