During the eighties, you could pretty much walk down the street and trip over an action star every hundred metres, they were that plentiful. The likes of Norris, Seagal and Van Damme were churning out titles at a cracking pace, most of which were guilty pleasures to watch.

Today is a very different landscape, with action heroes now very much in short supply, having being replaced by the ‘super’ variety.

But if one man could be said to be continuing to fly the flag for his eighties comrades, it’s Vin Diesel.

With social distancing such a concern, filmmakers had to be more creative for fight scenes.

Whilst on a mission for his country in Kenya, Ray Garrison (Diesel), gets kidnapped. When the psycho threatening him doesn’t get his way, he decides to kill Ray, and promptly shoots him in the head.

Death is usually fairly permanent, but not for Ray. When he next opens his eyes, he finds himself on a table in high-tech surroundings. And as he has no memory of what happened, Dr. Emil Harting (Guy Pearce) is on hand to fill in the blanks.

Harting explains that he did technically die, but by using his cutting edge, nano technology that is now flowing through his veins as his blood, he managed to bring him back to life. Not only that, the tech inside of him has given him incredible powers, the kind of which that will aid him in his need for revenge.

So that’s exactly what Ray sets to work on doing, unaware that Harting’s motives might not exactly have Ray’s best interests at heart. 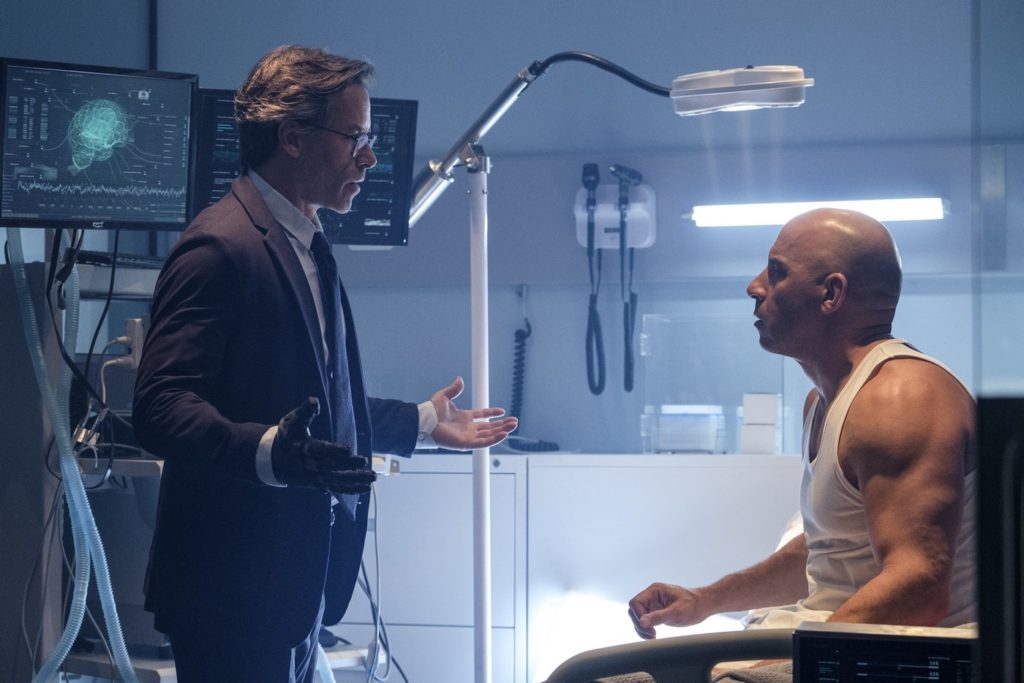 I'm sorry Vin, but it's true, you have to make 200 more Fast & Furious flicks to stay remotely relevant.

This film is all about risk, and that has nothing to do with it being based on the Valiant Comics character, although it’s certainly brave going up against the likes of Marvel and DC with a relatively unknown hero.

The obvious risk here is that the film is directed by David S.F. Wilson who makes his big screen directorial debut. You can tell why he got the job, as he has a career in visual effects in both film and gaming, and this film has some very gaming elements to it. But although he looks competent on the visuals front, it’s clear that he doesn’t know how to direct actors.

It’s fair to say that with a Vin Diesel flick, you kind of know what you’re getting from the outset, as the bulky star has the range of a paper plane, making him a further risk to the project.

But it’s even with the supporting cast that Wilson struggles with, as all aspects of their performances are flat and two dimensional. You certainly have to feel sorry for Pearce and Toby Kebbell, who, despite their best efforts, are clearly doing it for the paycheck.

Another element of the film Wilson wrestles with is the story. In fairness, it’s quite solid, wholly let down by a script with some truly dull dialogue. So not only do you have a cast of soulless characters, they're spouting pure drivel. New Girl’s Lamorne Morris certainly gives it his best stab, playing a quippy tech head, but it’s difficult to appreciate his work over a dumbfounding English accent.

And for the record Dave, if you’re going to attempt to shoot London’s Soho, and the south east of England, in South Africa, you have to make it look like you’re in the same continent, at the very least. He could have had footage from space and it would have been more convincing.

Although with the world as it is, having another superhero sounds just what we all need, but sadly Bloodshot isn’t it, as there’s nothing here that can save us, especially from boredom.