As anyone whos ever played one will know, Mario Kart driving games are about as much fun as you can get on four wheels. They didnt even mess the franchise up by adding bikes either. And guess what? Theres not a licensed real vehicle in site. You drive cartoony vehicles around various bonkers courses shooting shells and other weird weapons at each other. In other words, sheer driving bliss.

In 2000 developers Bizarre Creations released the very antithesis of Mario Kart in the very real shape of Metropolis Street Racer for the underrated Dreamcast. The series soon evolved into 2001s Project Gotham Racer, where it was snapped up by Microsoft as an exclusive title. It was a racing game like no other; it allowed you to drive real cars around various real locations around the world. Not only did you have to drive fast, but you also needed to do it with style to progress. It was a petrol heads wet dream of a game.

Bizarre Creations handed the franchise keys back to Microsoft after completing PGR4, allowing them to go off in new directions. Theyve returned in the drivers seat with Blur.

Blur is a pure hybrid racing game. It has real cars and real courses mixed with sci-fi-ish weapons. Of course you can just imagine the meeting the developers had: OK we love the silliness of Mario Kart, but we also love the realism of commercial vehicles and real locations. If only there was some way of...quick, write this down! 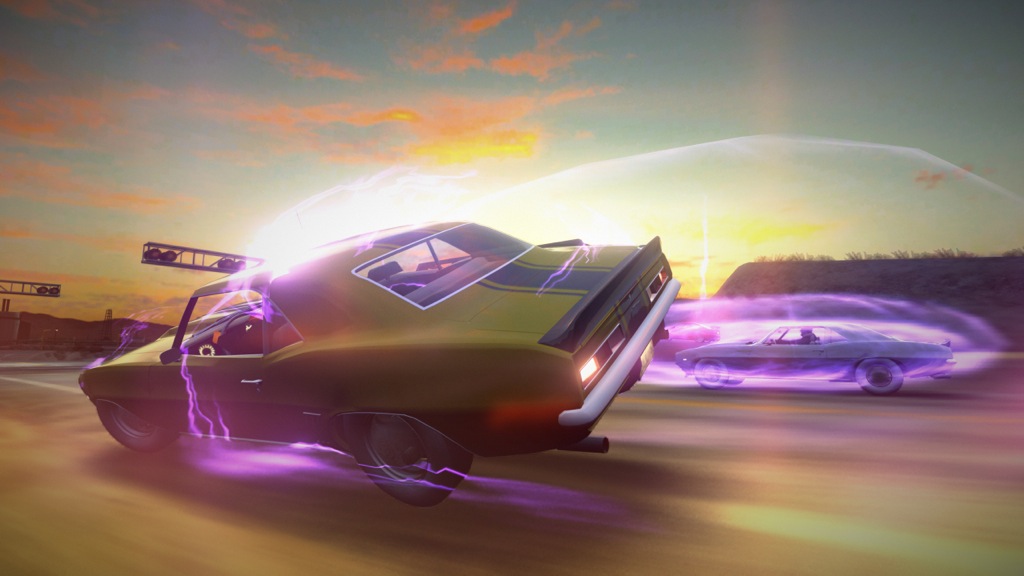 WTF?! No-one said we'd be racing against Grease Lightning? Look at it, it's both systematic AND hydromatic. I can't beat that!

But does what must have seemed like a good idea at the time, really translate that well into a new driving franchise? The answer to that question depends on your own ability to suspend belief. Heres a scenario. Youre in the driving seat of a Dodge Viper, revving on the line of a dock area in LA, preparing to drive the race of your life. And youre off, weaving in and out of the traffic, making your way to the head of the pack. But wait, whats this button do? It drops a landmine? And this one? Shoots three bolts either forwards or backwards from your vehicle? And what happens if I push this one? I shouldve known, a force field around the car.

Anyone who has driven a Fiat Punto, or any other car for that matter, will probably be aware that these power-ups are never offered as optional extras when you pick them up from the showroom. This is a real shame, as they would certainly come in handy on many of our roads. This begs the question then, why bother going to all that bother of getting licensed vehicles and life-like locations, if the main reason for having them is so you can have some electro-bolt thingies fly out of them? Whats worse is the fact that they dont even appear out of a James Bond-like gadget from the car; all the power-ups just shoot out of nowhere and have no physical connection to your ride. You may as well be shooting out rainbows from your windshield and jelly babies from your exhaust pipe. Its just plain weird.

So why on earth do the vehicles have to be real? The developers didnt have to go as far or as cartoon-like as those in Mario Kart, but surely there could have been a little creativity when it came to the vehicles? After all, gamers dont pooh-pooh playing Wipeout because the vehicles used dont look anything like a Mini or Ford Focus? We can understand what they were doing, but just feel they went the wrong way about it.

Thats not to say Blur is a bad game, far from it. Bizarre Creations know how to make racing games work, and Blur is no exception. Not only are there a huge amount of cars to unlock, they all handle differently too, with some better at drifting while others have better handling. And in truth, its difficult not to enjoy driving a Beetle, even if pointy things can fly out of its behind.

Theres a nice variety in the courses as well, with a fair mix of road and off-road experiences. Just dont expect to drive through any haunted castles.

On top of that you also have time trials, destruction races, as well as Fan Demands, Fan Runs and the ability to earn upgrades for your weapons and vehicles. All of which give you more than enough reason to return again and again to the roads of Blur.

And the multiplayer experience is pretty sweet too. As well as the de rigueur of online racing  with up to 20 other drivers, you can also just sit back and enjoy some 4 player split-screen loveliness.

So as you can probably tell, Blur is by no means a disappointing ride. It delivers virtually on every level, with great car handling, plenty of varied courses and the ability to race yourself silly both off and online. If only Bizarre creations had the balls to live up to their name and produce a driving experience that didnt lean so heavily on its 55 licensed photo-realistic cars and real world locations. Then it could have really given Mario Kart a drive for its money.