A change is in the air regarding the current unacceptable attitude towards sexual harassment in the workplace (which appears to have been to simply ignore its existence), if the current media hype is to be believed, that is.

Regardless of recent campaigns, it still feels that it hasn’t gone nearly far enough, particularly when you consider that the current president of the free world is a proven misogynist who has freely boasted in the past of grabbing female genitalia. What a role model.

Still, there’s no denying that the downfall of Weinstein and the uprise of the #MeToo campaign have helped highlight this issue on a global scale.

This though, is the true story of a group of brave women, who, pre #MeToo, took on one man who ran the biggest news network in the world. 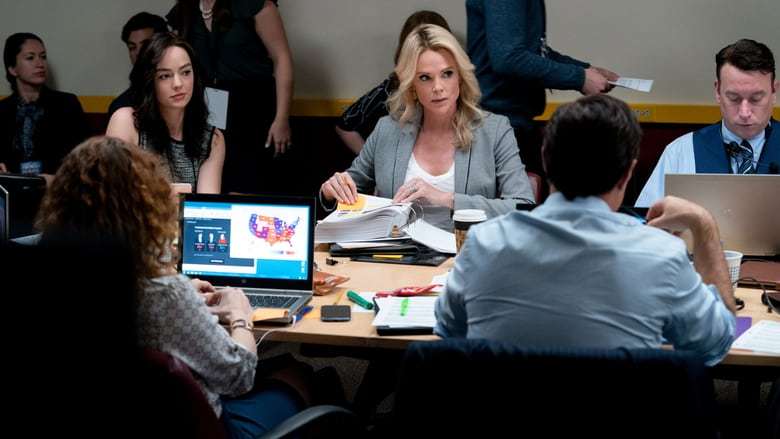 OK could everyone just put the damn cat videos away!

2016 and the US is in election mode, with the Republican debate set to feature wild card Donald Trump. Facing to interview him for Fox News is long time anchor Megyn Kelly (Charlize Theron), whose questioning clearly gets under his skin, as he sends out a barrage of hateful tweets directed at her soon after.

Meanwhile, back at Fox HQ, Gretchen Carlson (Nicole Kidman), co-anchor of one the network’s biggest shows, is also suffering from sexist comments, made by male work colleagues. She decides that enough is enough, and brings her issues to light through appropriate channels, only to get demoted for her troubles, being dubbed difficult.

Just starting out working for the network is Kayla Pospisil (Margot Robbie). She’s highly ambitious, with her eyes firmly set on the prize of being on-screen talent.

Although all these colleagues work at the same network, they have very little to do with one another. There’s is a common linking thread, unbeknownst to them, and that is their relationship with the man who runs the network, and who many consider one of the most powerful men on the planet – Roger Ailes (John Lithgow).

What Ailes wants, he gets, one way or another, and if you’re a woman with career ambitions, Ailes can make it happen, but it comes at a very heavy price. 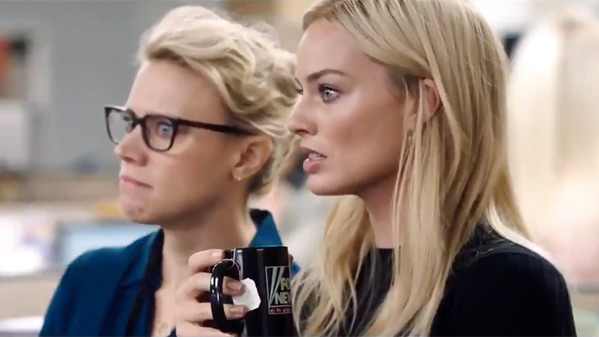 How has someone put tea in my coffee cup?! I mean, MY COFFEE CUP people!!!

Considering how big a deal this story was at the time, it’s only right that some of Hollywood’s heavy hitters get involved and bring it to the world's attention. It’s just a shame that it was not only told recently, but told far better.

Last year Showtime aired a gripping mini-series called The Loudest Voice, featuring Russell Crowe as the vile Roger Ailes, telling the story of his time at Fox News. It didn’t pull any punches in revealing what a scumbag Ailes was, with Crowe giving possibly one of his best performances.

And although director Jay Roach’s film features the considerable combined talents of Theron, Kidman and Robbie, it’s all just too insipid by comparison.

Here, the script doesn’t do nearly enough to highlight what a heinous individual Ailes was. There is one scene, featuring Robbie, that is supposed to do all the heavy lifting, and sadly it doesn’t manage, it, not by a long shot.

What the film fails to do, somewhat ironically, is put Ailes on trial for his despicable and unacceptable behaviour in the work place. Lithgow’s Ailes doesn’t go deep enough, doesn’t pull back the torrid layers, and certainly doesn’t reveal the true monster he clearly was.

The film also loses its way in its telling of the stories of its three female protagonists. Although working in the same building and all facing the same threat, there feels a disconnect between them. And their separate narratives somehow feel like they don’t tell the full story, or at least, certainly don’t do them credit. Perhaps it should have mainly focused on one – with Kidman’s character seemingly the one with the biggest arc – and devoted to telling her story to the best of the film’s ability. In attempting to tell all three stories, it dilutes not only the power of the film, but also does the current social narrative a disservice.

If the film does manage to capture your curiosity for what happened at Fox News, then it’s recommended to catch the more comprehensive The Loudest Voice for the bigger picture, warts and all.