Everyone knows that the only block worth playing with is a Lego one. However, the boom blox blocks come a close second. The idea for the game (and last years first in the series Boom Blox) came from an unusual collaboration between EA and Mr Entertainment himself Steven Spielberg. However, the game is certainly not what you would expect from the man behind Jaws, ET etc.

The eponymous blox are simply boxes. Theyre arranged in various ways for you to knock 'em down. And thats essentially it. However, the simplicity of the games shouldnt fool you - it sneakily sucks you in when you least expect it, and blox you in.

To begin with, there are a number of different themed areas to play in: show time, space, heroic and pirate. Within each section there are various puzzles for you to attempt to win medals: bronze, silver, and of course gold. The medal you win depends on the amount of points youve managed to win on that particular puzzle. The more medals you win, the more puzzles you can open. 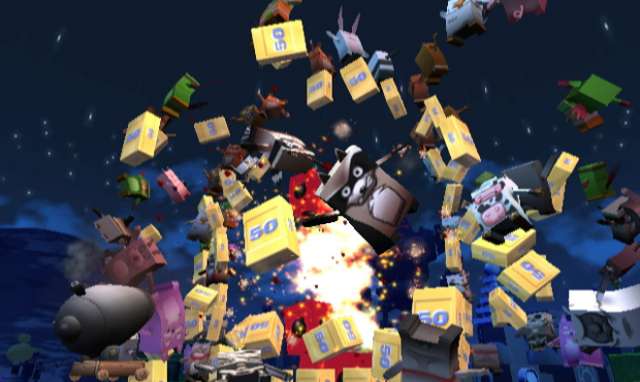 For the last time I'm a raccoon, not a bloody badger!

Each of these sections find you using various mechanics; from shooting a cannon to knock blocks down, throwing bowling balls, flinging with a catapult, or simply using a hand grip to pull blocks out in Jenga fashion. Whichever one you find yourself playing, youll soon notice how responsive the wiimote and nunchuk are. To someone watching you play, you might look like a puppet on strings, as your hands gesture wildly in mid-air; in actual fact though, youre giving a blox or two a good seeing to.

The graphics arent exactly breath-taking, but that hardly matters with a puzzle title like this. There are a number of character blocks that resemble cute(ish) animals throughout the game, and although EA go to the trouble of giving them names  which are all listed in the instruction booklet, including Marion Fluffy McCluck and Lola Woolington  they really serve little real purpose, except perhaps, mild annoyance.

The final section you can access is Create and Download. So if youre feeling particularly creative you can build your own level; and if its any good, you can share it with the world. And even if making your own isnt your thang, you can always download further levels to keep the bash party in full swing.

And as well as the solo puzzles, you can also play in co-op and versus modes with friends. So the amount of content here is quite impressive.

So it may not be über pretty, but theres no denying theres plenty of fun to be had. You know this when youve just missed out on the top medal, and for the umpteenth time you find yourself saying oh just one more go.

If you bought the first game, theres really no need to pick this one up too  unless its going cheap. But if youre new to the whole Blox experience, this is one party that shouldnt disappoint.