With reaction speeds slowing down, no doubt attributed to the inevitable signs of aging, we’ve found ourselves dabbling more and more with RPG’s of late.

When we think about it however, our relationship with the genre has been going on for some time. It was probably back in 1999 when we first developed a taste for them, without even realising, with the gateway RPG drug Pokémon Red; a game that was inventive and rich with creative monsters, a role-playing game that the masses could easily get behind. As we did.

The RPG genre has certainly gone from strength to strength, and bringing it right up to date is the release of the third game in the franchise Bravely default 2. 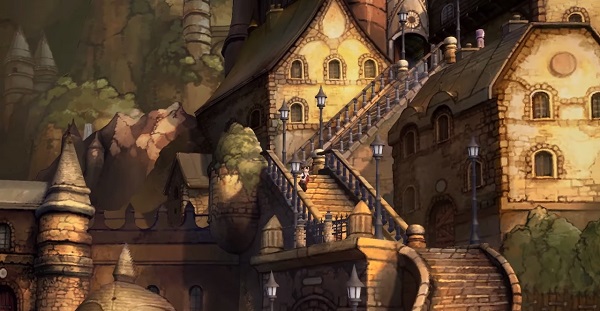 These guys look a little aggressive for the line dancing contest.

After four crystals of the elements were stolen, four intrepid heroes set out to retrieve them in an attempt to prevent an uncertain future.

Although a team, each with their unique abilities, the path ahead is a dangerous one, littered with monsters throughout. They have to work together tightly if they have any chance of both surviving and completely their daunting mission.

Despite being the third entry in the series, Bravely Default 2 introduces new characters and a new storyline, making it perfect for the new comer to the franchise.

As you start off your adventure, you can’t help but be taken by its visual presentation; it has a bright, cutesy feel, which comes across as adorable. This is supported by some entertaining accents and dialogue between the characters. But don’t let them fool you, as the game is far from a pushover.

It’s easy to get a little cocky playing the game, with a fairly standard turn-based attack system against your foes. We fell into this trap and fell hard. As with most RPG’s of this type, the quicker you can make your characters level up, the easier fighting enemies should be. Or so we thought. We played for a couple of hours, and were fighting whatever came our way, just to boost our fighting foursome. And then we came across a boss, and truly got our proverbial butts kicked.

It felt like that we could have been grinding for the next few months and we still wouldn’t have beaten him. As it was, we took him down on our second attempt, but it was definitely a stark warning of what was to come. 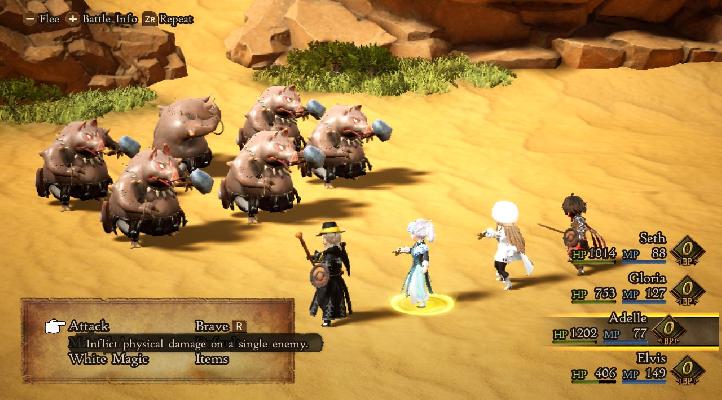 I hope my activity tracker has managed to catch all those steps!

The irony was, we hadn’t actually implemented one of the most crucial elements of the game at that point, which were jobs. Unfortunately the game doesn’t really highlight it, so it wasn’t exactly our fault. When we saw hints for jobs, we just naturally assumed it was referring to side quests, which there are many. But jobs in this game are very different.

What jobs are in this game are pretty much the same as classes are in a first-person shooter. You can choose a job, such as White mage, for instance, where you will start at level 1. The more battles you take part in, the higher your level rises, and as it does, it unlocks specific powers to that job, that can be used in battle.

It’s so well hidden however, it’s the kind of thing that can get overlooked, as we did. A recent video released on the Nintendo YouTube channel however, suggests we were not alone, as it focuses specifically on the jobs system.

The job system is vital to progressing in the game, and would certainly be foolhardy to attempt to tackle the campaign without it. That said, it still doesn’t guarantee a strong hand.

Although it’s a beautiful world to explore, you will have to prepare yourself for a lot of battles. Thankfully by pre-empting a fight, by attacking a foe from behind, can give you the advantage. And if you’re quick on your toes, you can actually outrun chasing enemies and live to fight another day. But running away from them won’t get you closer to levelling up, so balance is the key.

And then there’s the default system that graces the game’s title. We were expecting yet another game changer, but were sadly disappointed by its execution. Any character can default their turn at any time, which means they can have two turns next if they so wish. We were hoping that this would increase the power of the overall move, but that’s not the case; what ends up happening is that you attack twice with both attacks scoring relatively similar points, so it doesn’t really give you any kind of advantage.

One of our pet peeves is consecutive battles; these occur when more than one enemy attacks you at the same time and there’s no getting away from them. You are then presented by a number of creatures, who are all intent on putting you down. The deeper into the game you get, the harder these battles become. And just when you’re on your last legs, you deliver the final blow, and your enemies are downed. But because it’s a consecutive battle, a new bunch of fresh-faced nasties appear in their place and they want blood. Just when the game feels it can’t get anymore grindy, it does.

On a technical level the Switch does struggle in places, particularly with loading times, and the occasional slow down on screen. This probably wouldn’t be that noticeable if it wasn’t for the fact that the latest generation of consoles are lightning quick, and it’s something we’ve just gotten used to. Although the Switch straddles generations, you have to remember to be a little more forgiving.

To say that Bravely Default 2 is a challenge, is an understatement. It’s playful world certainly looks enticing, but it’s an RPG that we wouldn’t necessarily recommend to a casual player. It looks simple enough, and yet there is so much tinkering that can be done under its hood to improve your chance, tinkering that that game doesn’t necessarily advertise, that can make or break your experience.

It’s certainly a game for those that appreciate/tolerate the art of grinding. It’s the type of game where you may have to have grinding sessions, without touching any of the main story or side quests, just to build up your party’s chances, which calls for a fair amount of dedication.

But that’s not to say the game is without its rewards. It is a charming, vibrant title, a colourful world rich with colourful characters. It will equally test and entertain you. If you have the courage it will lead you on adventure full of fight and peril. There’s every chance however, that if you’re a pro at the RPG genre, then it won’t present itself as that much of a struggle. In which case, we doth our magic cap to you.

But even if you’re like us, becoming slightly more accustomed to the RPG world, this is certainly a game worth exploring. And yes, grinding. Just keep levelling up, and bring the fight on we say.