Recently it feels like gamers have been cornered into playing realistic first person shooters. Of course war can be a serious thing, but at the same time, being gamers, an FPS and realism dont have to be exclusive. Luckily for us, Bulletstorm takes very little seriously, particularly a silly matter like war.

You play Grayson Hunt, a larger than life space grunt for hire, who most certainly graduated from the school of shoot first, ask questions later. Thats not to say he doesnt have a heart; on one campaign he and his group realise that their boss Colonel Sarrano hasnt exactly been honest with him, as hes had them killing innocent folk and not telling them.

After a bit of a hoo-hah, Grayson and the only other surviving member of his team Ishi, find themselves on a distant planet, miles from anywhere, surrounded by hordes of enemies that just want them dead. Their mission is twofold: get off the planet in as close to one piece as possible; then pay Sarrano a visit with a few choice words for him.

So then, it doesnt win any awards for an original storyline. In fact, the game has very little in the way of any originality. But it doesnt make it a bog-standard FPS; Bulletstorm is a pimped-up joy of a game. 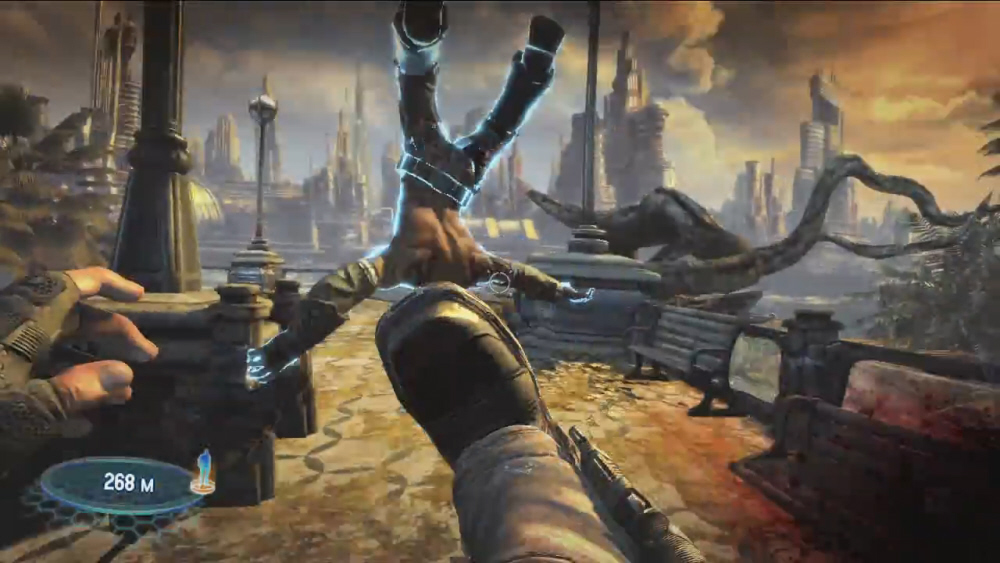 Now this is what i call sticking the boot in.

Through its seven and a bit chapters of the single player campaign, it takes you on a journey littered with a certain F word; thats right, fun. Its a chirpier effort than its labelmate (Epic) Gears of War, albeit with the same kind of gun and run mentality. One thing that lets it down in comparison to GOW is its lack of any cover system. This means you manually have to pop your entire body away from cover to shoot anything, exposing all your soft bits and pieces. And dont even bother with ducking, as all it comprises of is a crouching component that you have to fiddle about with pushing down on the analogue stick; by doing so doesnt even guarantee you wont get shot, so its pointless even attempting to use it.

You also cant jump. We are in the 21st century arent we?

What the game would consider is its unique selling point is its Skillshot system. This works in building up a score by killing off your enemies in the most bloodiest and creative fashion. The thing is, this principle has just been lovingly lifted from the cult (i.e. despite being a lot of fun, didnt actually sell) Wii game MadWorld. The bigger and better methods of dispatching your foe, the bigger the points for the kill; this could involve using a particular weapon in a creative way, or/and involving parts of the environment around you. Its not as viscerally graphic as MadWorld, but its still suitably entertaining nonetheless.

One of the ways that Hunt can set up a kill is by using his boot; an enemy runs towards him and he gives him his boot in their face. They then go flying off, whereby you can shoot them midair, or let a pointy bit of scenery finish them off. Its a simple device and yet it doesnt get tired using it.

He doesnt have to rely on his size 10s alone of course, he has a hefty arsenal he can dip in and out of. Theyre all pretty much standard issue stuff: machine gun, sniper rifle, bouncer cannon etc, with the opportunity to upgrade them all along the way. Unfortunately you can only carry and change on the fly three of them at any given time. This soon becomes very annoying, forcing you to just go through the campaign with the three weapons you carry the most, which is a real shame and missed opportunity. There are plenty of opportunities along the way to change them, but its just extra faff you can do without.

You do get to carry a leash-type weapon with you that allows you to strike out at enemies dragging them closer to you slowly, allowing you an opportunity to be more accurate with your shots. You can also upgrade it to take out a few of them at a time by pounding the ground and having them sent flying through the air, so you can pick them off in slo-mo like a duck hunt.

Although the campaign begins on a dreary, run of the mill, space ship, the locations thereafter are varied and fun to explore; not that you can do too much of that, as your path is fairly limited. Still, the environments are well thought out and surprisingly bright and colourful.

Its also a shame that you cant go through the story mode on your own; not only are you joined by Ishi, but around the halfway mark youre joined by another character too. You can understand from a story point why theyre there, but in terms of running and shooting, they more often than not get in the way.

What does impress are the varied types of enemies youll encounter. Just when you start to get a little bored with one lot, another group appear and add that bit more of a challenge.

Overall though, the single player campaign is immense fun. Yes its pretty much a bog standard FPS set up, but one with the prettiest and shiniest of bells on.

And if you dont expect too much from the multiplayer, you wont be too disappointed. The levels arent huge, nor are the numbers of players who can play at any given time, but they still have a high enjoyability factor about them. One mode in particular, Anarchy allows you to take on wave after wave of different enemies, which makes it feel a lot like Serious Sam, which is no bad thing.

And if that wasnt enough, there is also something called Echo mode, which allows you to play through levels again against the clock to rack up the largest score you can.

Bulletstorm then, will not take the first-person shooter genre by storm; what it does do remarkably well however, is act as a reminder to other games of its ilk that theres no shame in allowing players to actually have a bit of fun while they play them.

So if youre suffering a tad from various hardcore tours of duty, Bulletstorm could deliver the perfect dose of R&R to get all that realistic warfare out of your system. Trust us, taking out these badass aliens is a real blast.