Gaming can often equate to eating: sometimes you feel like a full meal, where you want to take your time to indulge and savour the experience; occasionally though, you can be satisfied with a quick snack just to get you through the day.

Here then is a delightful light nibble, based on a classic recipe no less, that is likely to get those gaming juices flowing.

Chef Peter Pepper – like Gordon Ramsey but less sweary – is in his kitchen, running himself ragged preparing burgers. It should be simple enough, with all the ingredients laid out for him, waiting for his final touch, even if it is just from his feet running over them. Once he does, the ingredients land in a delicious pile at the bottom, ready to be served. 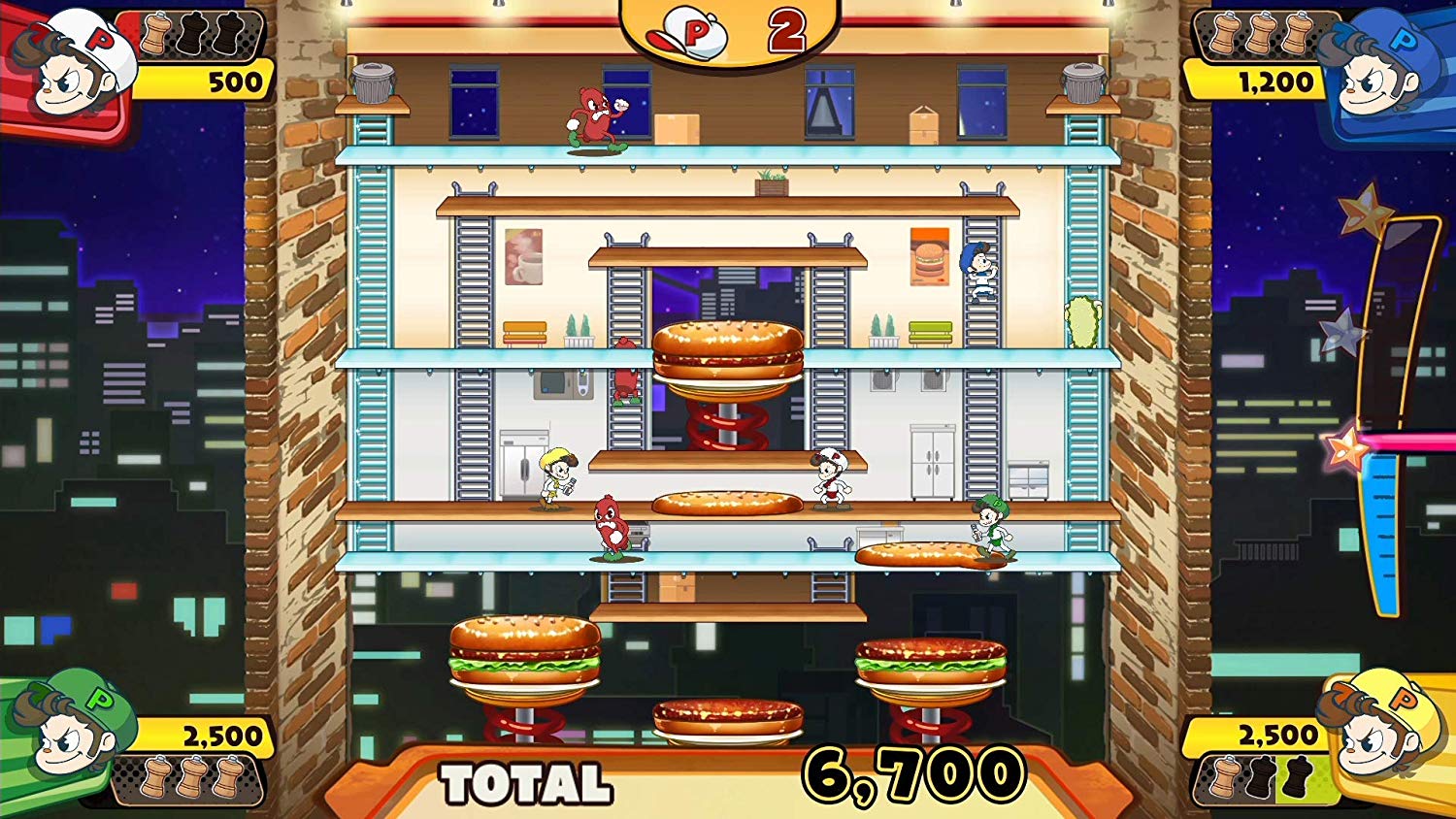 His kitchen – again like Chef Ramsey’s - is a bit of a nightmare, with food items, including hot dogs pickles and eggs, out to get in his way. Luckily it is very well constructed, with ladders all over the place, but with the foodies out to get him, he has to be quick on his toes.

As if they weren’t concerns enough for health and safety, Peter also is occasionally confronted with crumbly floors, oil spills and frozen ladders to negotiate. You can see it in his eyes that he often regrets not going for the pop-up kitchen in Shoreditch route instead, but hindsight is a lovely thing.

He can get his own back however, by dropping his ingredients on his foes as they pass below him, if he times it right, which helps bring that burger together. 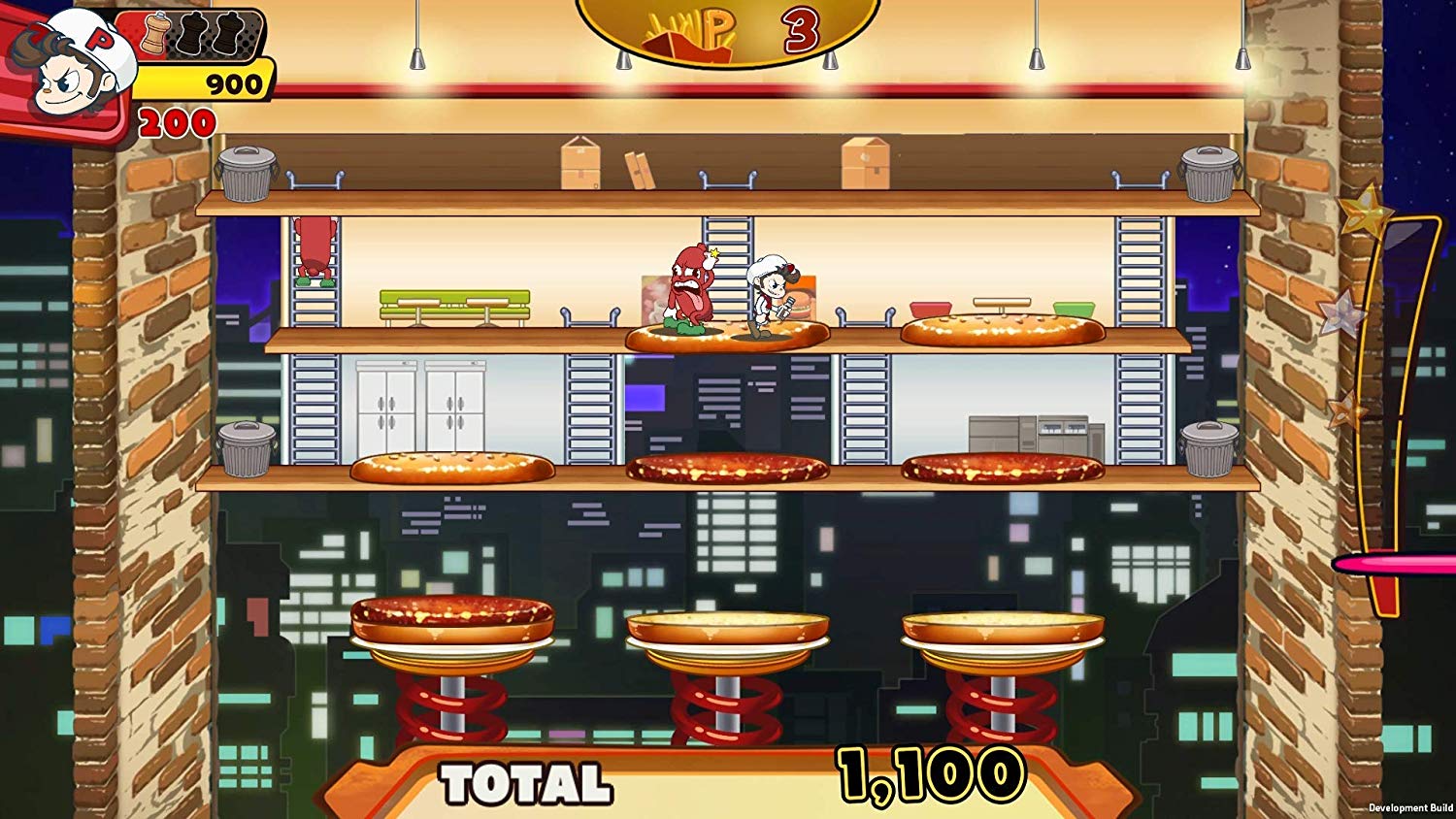 It was back in 1982 that Peter Pepper first put his chef whites on and began his culinary adventure in Data East’s arcade game. And although he may not have risen to the top quite like his contemporaries such as Mario and Donkey Kong, he’s done alright for himself, including cameos in the films Wreck-it Ralph and Pixels.

He and his kitchen may have been given a sleek renovation, but the game plays very much as it always has. The action all takes place on a static screen, where you move him up and down, left and right, around the screen. You have one button you can press from time to time, that will unleash a blast of pepper in the face of your enemies that briefly stops them in their tracks, allowing you to pass by without damage.

It’s a simple, pick up and play experience that is perfect for a quick blast of gaming. It’s also a fun experience in co-op mode too, with up to four players locally playing. But like certain snacks you have to be careful not to get too addicted. The game has that whiff of “just one more level” about it, which means you could quite easily over-indulge without even realising it.

This latest version of the game on the Switch is a faithful interpretation of the original, but perhaps a little too faithful; the exit from the ladders from one platform to the next doesn’t feel as fluid as it should be, meaning that accidents in the kitchen are bound to happen.

It’s somewhat of a one trick beef patty, with the gameplay feeling slightly generic after a while, despite offering over a 100 puzzles, delivering very little in variation in terms of game-play, regardless of the mode you’re playing in. Even if it were preparing something other than burgers might have helped.

This doesn’t detract from the overall experience though. Peter Pepper’s return to the kitchen is a successful one, serving up a delicious take on an old favourite. If you’re not looking for anything too heavy on the menu, and just want something to tide you over, this one comes well recommended, making it the perfect Switch snack, for at home or on the go.