On the spectrum of game genres, there’s a section right at the bottom labelled ‘Sims’. In their purest form, they have to be considered the dullest part of gaming.

In a medium that allows you to go anywhere and be anyone you like, the simulator literally sucks all the joy out of it, by expecting you to take part in the relative mundane.

Fly a plane from Heathrow to Paris; make an announcement that the 8.33 from Watford to Euston has been cancelled; give your pug puppy a treat; build another toilet block in your zoo. Joy suckers one and all.

This sim is set in the crazy world of car mechanics. That’s right folks, you better buckle up, it’s going to be a safe and law abiding ride. 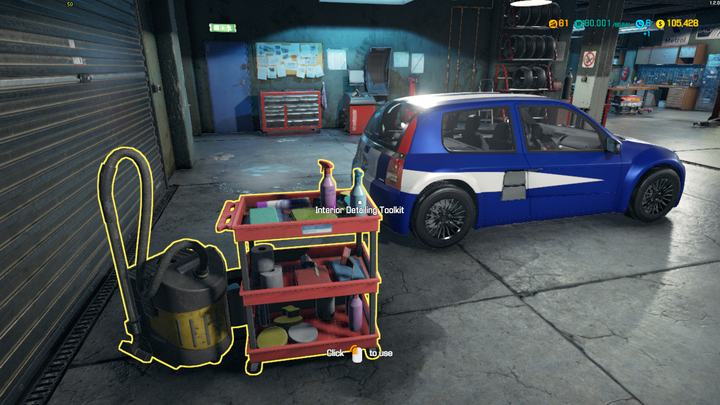 You know what they say, feel clean on the inside, and well, you'll be clean...

You run a garage. You are also the only person who works in that garage. The phone rings, a customer wants you to fix their car. You accept the job. Fix the car. The car disappears once the job has been completed. You take another call, a customer wants their car fixed... And so it goes on. And on.

It’s not terribly exciting. And yet, you can see the appeal. There’s something almost meditative about the process. You get a list of things wrong with each car you accept to work on. You order the parts in, locate the faulty parts on the car, and replace them. With only the radio being any kind of distraction – a welcome one at that – you can get into the zone of focusing on fixing whatever is in your bay.

The better you do, in terms of money made, increases your level, which allows you to open up various extra abilities in your toolbox; these range from increasing the space in your garage to accommodate more cars, to a work bench to fix parts, to an entire new section for spray painting and such. A huge oversight is the lack of a vending machine, because as there doesn’t appear to be a working day, you can easily lose sight of what time it is and have those hunger pangs set in. 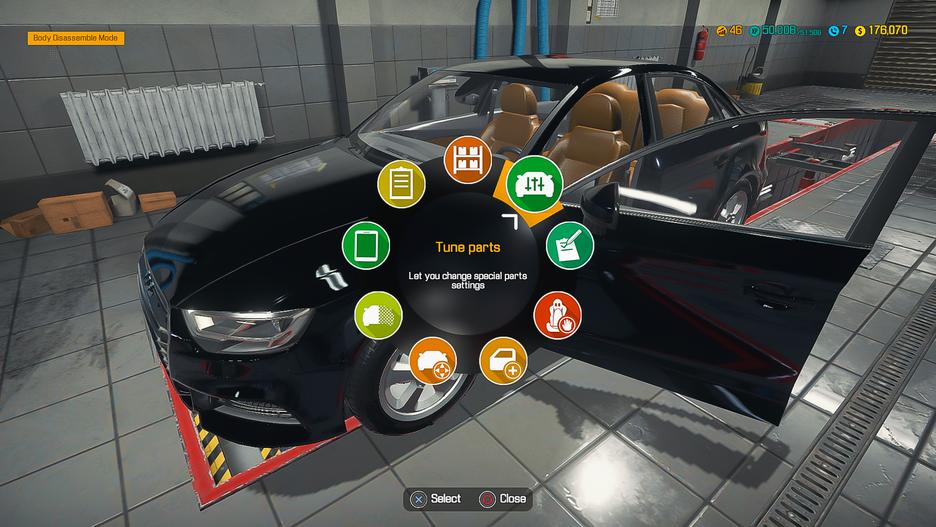 It's great, I don't need a mechanic anymore, I can do it all on my app!

The games own mechanics are a little on the dry side. There’s no interaction with humankind whatsoever. There’s no opportunity for garage bants, so you can’t whistle through your teeth and state “ gonna cost ya” at any point. And as there’s no other soul working with you, you can’t take the mick out of soppy Dave for applying to go on Love Island. It’s just you, all alone, in a small space.

Clearly the developers have tried to address this self-forced claustrophobia, by incorporating a test track to take cars onto, but it almost feels like an afterthought tacked on, adding nothing to the overall experience.

And then there’s the learning curve. Or lack of one. The tutorial is definitely on the wrong side of basic, and could certainly benefit from some fine tuning of its own. Somehow we managed to completely strip down the engine of a car in a bay, without any instruction. After the initial euphoria wore off, there was a realisation of not knowing what to do next exactly. Of course we didn’t follow the brief instructions to the letter, and ended up having to restart. With something as tricky as car mechanics, it would have been nice to have a hand held once in a while. No sign of it here though. This is where a general knowledge of the inner workings of a car might come in useful. But then if you know your way around the real thing, why the hell would you want to pretend to do it here?

When it comes to repairing the cars, the process is quite appealing. You can highlight the areas you need to work on, and the parts that need attention, giving you a solid starting position. The camera can be a tad on the wild side, which may cause those who suffer from motion sickness some stomach churning, particularly on a big screen, otherwise take it nice and slow.

There’s also a kind of pleasing puzzle element to the process too, as it helps if you can remember the order you take parts out, and the order you replace them.

A word of warning though, it’s a good idea to save your progress at the start of every project; we reached a point where we had bought parts for a car (shock absorbers if you must know), but when we tried to fit them, were told we didn’t have the parts. It was probably something we had, or not, done (it wasn’t), but when we went to right the job off as a mistake, there was no way of moving the car on, possibly to a junkyard ‘round back to burn, or just taking a hit and deleting it. Because we hadn’t had the good sense to save our progress, it was at this point we hung up our greasy overalls forever.

For casual gamers, this game really lacks any kind of personality, but that can be said of pretty much all the mechanical sim games out there.

Under the bonnet however may be a game to tighten the nuts of petrolheads, who can’t get enough of all things dipstick related. Yes it’s a grind, but hey, welcome to the world of simming.

If it were a car, it would be a basic run-around, ideal for short little runs out, but lacking any added extras to make it a more appealing, fun ride.