As has been previously mentioned on these pages, there’s a worrying trend for the revival of the musical genre. But if there’s one release that may well have producers rethinking further sing-songy outings, it’s Cats - so if nothing else, there’s one positive to come out of it.

Often the most indicative Litmus test pre-release for a film is its trailer, so when the Cats one burnt violent red with the acidic reaction to it, its future didn’t bode well.

But with much of that hullabaloo now reduced to a gentle purr, could it possibly find a warmer welcome for its home release? 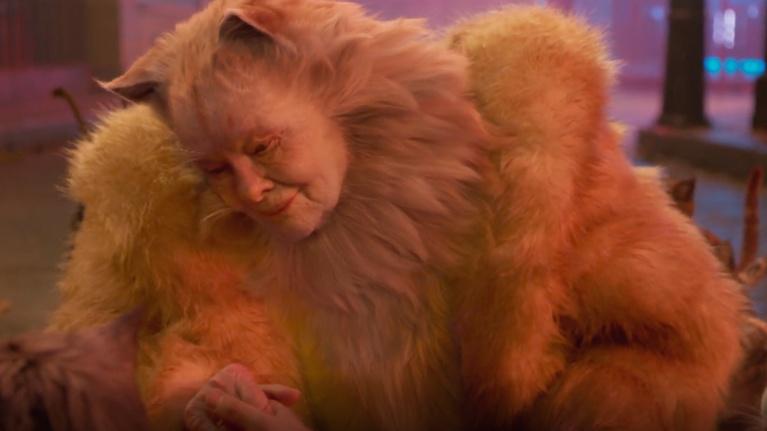 If only I had the courage to say no to this...

After being unceremoniously dumped on the streets of London, Victoria (Francesca Hayward) soon finds herself the new kitty on the block. Although initially weary, the streetwise cats soon take a shine to her and introduce her to their feline world.

For the most part, everything is playful and fun, until she learns of the mystery cat known as Macavity (Idris Elba). Every year there is a ceremony, overseen by the extremely wise Old Deuteronomy (Judi Dench), which sees one cat get picked to ascend to the Heaviside Layer, where they have the chance to have a new life.

Macavity is desperate to be chosen, and this year he’s prepared to compete in the foulest of fashions, using his powers to make other kitties disappear.

And with Victoria only just arriving, there’s every chance she’s going to get her tail caught up in what could turn out to be a rather messy cat fight. Yes I'm milking it. Tell it to my lawyers bitches.

Considering that he helmed the Oscar-winning Les Misérables in 2012, you would think that you couldn’t possibly find a safer pair of hands than Tom Hooper’s to get this project purring. And yet it’s difficult to find any positives to say about this fiasco.

The most obvious one to address are the cats themselves. Their general appearance is both awkward and unappealing. The issue may have something to do with the heavy use of CGI, which simply just doesn’t gel on screen. Often the characters look like they’ve had their faces scanned onto these digital creatures by first year students who really didn’t have their hearts in it.

It also doesn’t help seeing the cats for the majority of the film walking around on two legs. This seems almost a moot point when you consider this is a film that sees cats singing, but seeing cats prance around on their hind legs is surprisingly disturbing.

But it’s not just the cats that simply don’t feel right, it’s the world they live in too. Hooper’s London is a very theatrical setting, so much so that it loses all sense of the cinematic, making quite a claustrophobic experience. It has a dated sheen to it, as if it were filmed around the same time of something like 1952’s Singin’ in the rain, where although Gene Kelly is clearly not dancing in a real wet street, it still has bags of charm, where this sadly has none.

Another possible inadvertent nod to musicals of old could be Dame Dench’s appearance; she would most certainly win first prize in a The Wizard of Oz fancy dress competition with her spitting image of the Cowardly Lion; so much so that you can almost hear her say “Put ‘em up!” under her breath.

Hooper isn’t helped either by the arrangement of the songs, which should have been revamped for this new version, but feel as if they were just lifted from the original 1981 stage musical soundtrack.

And yes, it’s clear that this is a musical, but is it necessary for nearly every piece of dialogue to be sung? In doing so, it really stunts the progression of any narrative, with the songs having to work even harder to convey the story.

There are one or two elements that prevent this from being a total dog’s dinner. The first would be two strong performances, from newcomer Hayward, and Jennifer Hudson who gives a truly hair-raising performance with her version of “Memories”.

There’s also a new song, “beautiful Ghosts”, performed and co-written by Taylor Swift, with a helping writing hand from Andrew Lloyd Webber himself, which is a welcome addition. Unfortunately its inclusion only goes to highlight the mediocrity of the rest of the soundtrack, which really struggles to come alive on the big screen.

This is a version that may well live long in memories, but sadly for all the wrong reasons.