Actor Ed Helm seems to really enjoy working in offices. In his day job he plays Andy Bernard in the hit US sitcom The Office. Hes moonlighting here however, playing insurance agent Tim Lippe. Maybe its just a lot safer than hanging out in Las Vegas, where he got into all sorts of trouble in 2009s The Hangover, and looks likely to get into even more serious waters in Bangkok in its forthcoming sequel.

Its not a job that you expect people to enjoy, but Tim Lippe (Helm) really loves working in insurance. He has his reasons, but the upshot is, he believes he can really help folk. And in his small community of Brown Valley, Wisconsin, he certainly does his best. He can hardly be described as a cut-throat businessman; however, his colleague Roger Lemke (Thomas Lennon) can.

Lemke is the companys golden boy; he even features in their latest TV ad. Hes also credited with single-handedly winning them the sought after Two Diamond award. With this years annual ASMI convention just around the corner, Lemke is a shoe-in to represent the firm. Or he would have been if he didnt die under mysterious circumstances that may or may not have been sexually related (they were).

Suddenly Tim is given the opportunity to leave his comfort zone of Brown Valley and head off to the semi-bright lights of Cedar Rapids to represent them all at the convention. As exciting as this news is, its a bold step for Tim; hes not one for leaving the confines of his small town, so venturing outside of it is big deal.

On his arrival, he soon realises that hes mixing with the big boys and girls now, most notably Dean (John C. Reilly), Ronald (Isiah Whitlock, Jr) and Joan (Anne Heche). These guys know how to party and are hardened vets of the convention scene. Together they open Tims eyes to a world hes never known, but from his first impressions of it, he likes what he sees. Its not long however, before events tumble out of control and Tim finds himself out of his depth. Hes definitely not in Kansas anymore thats for sure, or Brown Valley for that matter. 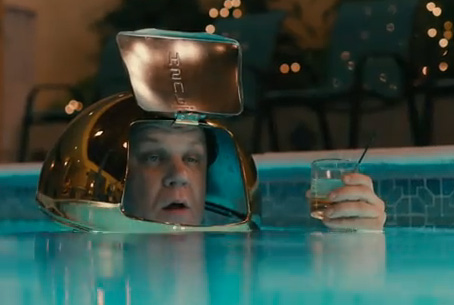 This is just the proof I need to show - hic- James Cameramanon that I'm ready for the Abyss 2.

Considering that Director Miguel Arteta has a feel for darker comic material (he directed Youth in Revolt after all) its a surprise to see him attracted by this more accessible material. Even stranger is that he chose Ed Helm to be his lead. Its not that Helm isnt any good, far from it, but ultimately hes playing an extension of his The Office character Andy Bernard. Its not like Arteta wouldnt have been away of this, particularly when you consider that hes actually directed an episode of said hit US comedy.

The problem with Bernard being on this Busmans holiday, is that comparisons are bound to be made between the two, and unfortunately Cedar Rapids loses out in that particular Office-Off. Phil Johnston, the films writer, just hasnt written anything that can be considered funnier than any given episode of The Office on any level.

To his credit, the film isnt without its charms. Heche certainly puts in an unusually warm performance, and its good to see Whitlock in a comedic role; although theres possibly one too many in-joke gags about HBOs The Wire, which he appeared in, but shiiiiiiiiiiiiiiiiiiit, you already knew that. Helm is clearly in auto mode, playing a character hes already previously nailed. Johnston has really focused all his efforts on making one character funny, and thats Reillys Dean Ziegler. Reilly has a great touch for comedy  he puts in a great performance in the recent Cyrus for instance  and this film is littered with some excellent one-liners for him. Everyone else however, hardly gets a look in.

Arteta does manage to convey a real sense of camaraderie amongst his cast though, with a similar feel to the one seen in Hot Tub Time machine, but with slightly less time travelling involved.

Its a gentle comedy that can certainly put a smile on your face, but wont do much more than that. What it proves without doubt however is that if Helm wants to avoid being typecast in future roles, he definitely needs to get out of the office more.