The notion of niche video gaming is a strange one. Unlike films say, where you can have people who enjoy Hollywood blockbusters but have never seen a foreign language film in their life, you're either a games player or not.

Of course there are genres that some people gravitate towards more than others; first-person shooters pull in the trigger-happy crowd, petrolheads go for your racers etc. And yet despite how glorious some games are, like Ico for instance, there are going to be some titles that the majority just won't play in their droves. Tetsuya Mizuguchi's Rez, released in the UK in 2002, can definitely be added to that list.

On a base level, it was a simple enough on-the-rails shooter. With its striking visual look and its immersive soundtrack it was much more than that though. But despite being almost literally mind-blowing, it can't be considered a commercial success. It's difficult to ascertain why exactly, as shooting games themselves are pretty popular, but it just didn't connect with a mass audience.

Not one to be deterred, Mizuguchi has stayed true to his unique vision and produced an eerily similar game for this current generation of consoles. Child of Eden is essentially the sequel to Rez. And like its predecessor, it doesn't disappoint. 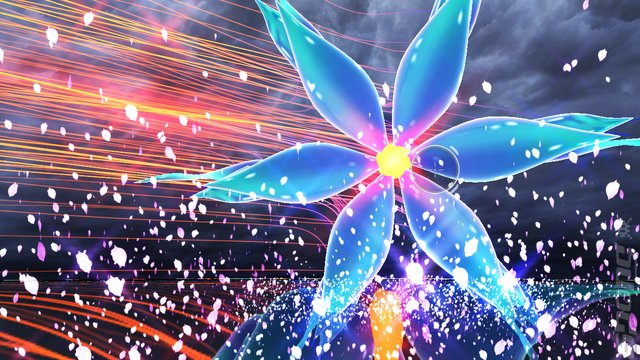 This game is not recommended to those who suffer from hayfever.

There is a flowery, new-age nonsense story attached to the game, but it makes no real sense and certainly won't stop your enjoyment of the game. Basically there are five levels you have to play through, shooting down enemies as you go along. To progress you need to achieve a certainly amount of stars, which you obtain once you've completed a level. Simple.

But much like Rez, this title is more than just a game. It's a playable art installation. Yes it does sound poncy, but that shouldn't put you off. Just because it's just as valid as a work of art as it is a video game, shouldn't deter you from playing it.

When you 'dive' into one of the levels, your senses are immersed in a wall of colour and sound. Actually it's possibly more than that if you have a 3D set, but even in plain old 2D it's quite a trip.

The action can hardly be described as frantic, but that's kind of missing the point of it all. You do get to shoot things down, but the game does give you time to just absorb the incredible environment you're in. Whereas you had a character to guide through the worlds of Rez, you just have a very simple reticule to move around on screen and aim at things. Highlight the enemy with it whilst keeping a button held down, and on release a shot will be fired at it. You can highlight as many as eight enemies at a time to increase your score. You will also need to shoot purple enemies manually, using a shoulder button, which just helps you keep you on your toes a bit more.

Of course both versions of the game can be played without the normal controllers. For those that like flapping their arms around then you can utilise the Kinect on the 360; for those who still enjoy the feeling of plastic in their sweaty palms, you can use the Move controller with the PS3 version. You have to work a little harder with the Move, by aiming the controller at the screen, but it gives it a curious magical quality if you do, in a Harry Potter spell-casting fashion.

Whilst you're swimming in this visual sea of splendour, your ears are also treated to a pumping, engaging soundtrack. So much so that the player can almost feel like an extension of the game.

It's true that the only real downside of the game is its length; with five levels it won't take you weeks to finish it. And yet you may just find that playing it is the perfect antidote to this hectic world we live in, and much like the world of Tron, you just might be sucked into it more than you would imagine.

It's not often that the word 'beautiful' is used to describe a video game, but its more than an apt description for this one. And in a world of Gears of Wars greys what's wrong with a little beauty in video games?

Admittedly this game does flaunt itself as an esoteric experience, but at its heart, it's just a pretty shooter. If you enjoy shooting things in video games, then there's absolutely no reason why you wouldn't love falling head over heels with it. If you're brave enough to try something that isn't normally your cup of tea, Child of Eden will reward you in ways you couldn't possibly expect.

If you consider yourself a true lover of gaming, this is a must-have game for your collection.