The success of the Mario Kart franchise is almost too much to comprehend. Take the current console version, Mario Kart 8. Despite everyone waiting with their foot in the clutch aching to set off with the next iteration, Mario Kart 8 Deluxe has just received a massive update of no less than 48 courses, featured from previous titles. And this is for a game, lest we forget, that was originally released in 2014 on the Wii U system.

With that kind of waiting time, it’s no wonder that other kart racing titles pull up to the bumper for our attention. And if any is to be an attention seeker, it’s Chocobo GP. 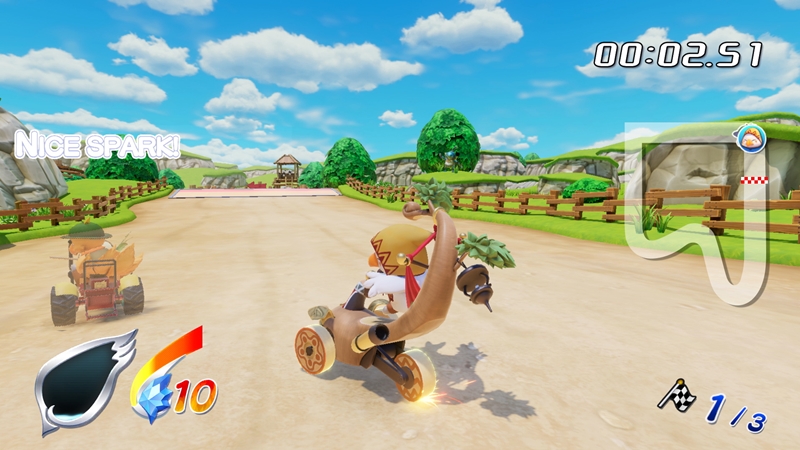 As with many of these kart racing titles, this one is a spin-off, featuring a large number characters from the hugely popular Final Fantasy franchise.

It’s cute, quirky, and in a lane of its own for being completely bonkers. Just sit on front of the story mode and do all you can to wrap your head around it – we dare you! For all the cray-cray that the story brings, it actually is just a puffed up tutorial mode.

The game isn’t helped by only having just two classes to choose from: beginner and master; having played the fore mentioned plumber’s game a number of times, it seemed rude not to pick the latter. It was chaotic, and overwhelming in places, but didn’t take long to get used to. Still, it feels the game would have benefitted from a greater choice of classes, to cater for more levels of experience. 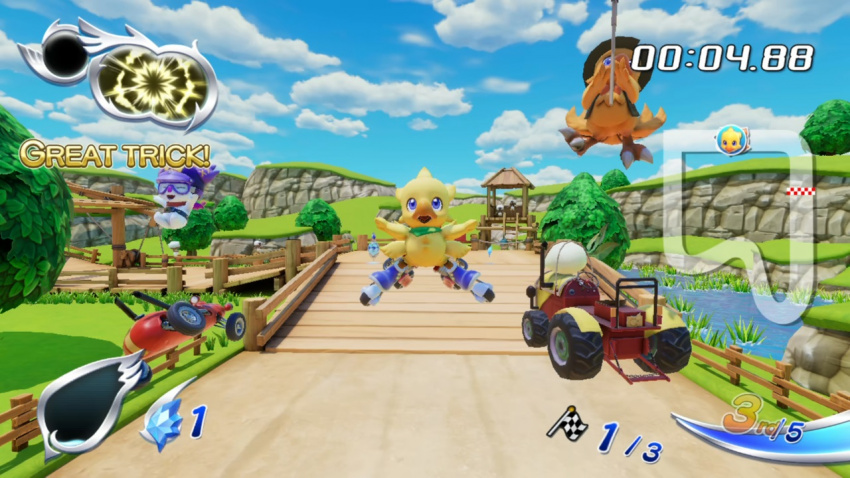 Of course I can't stop grinning, i'm making so much cash from you guys!!!

Course are creative, if a little too hectic, and the cutesy characters are fun to control, if a little fiddly occasionally. Playing on the Pro Controller proved awkward at times, having to instigate a bit of finger yoga, with the Y button often having to be used, despite your finger always being on the A button to accelerate. Braking wasn’t entirely helpful either; pressing B felt like you were bringing your vehicle to a complete stop, as opposed to braking. But hey, who needs to brake, right?!

The real elephant in the room however, wearing the red leather driving gloves and the cool matching goggles, are the micro transactions, which are outrageous. If the title were free-to-play, the micro-transaction might almost be understandable, but as this is full priced retail, it’s simply unforgiveable. Sure you can probably ‘complete’ the game to a certain extent, but the shop experience shouldn’t be so geared towards players having to use actual cash. And with a game produced in such a colourful, cutesy and vibrant way, there’s doubt that it was done to attract the youngest of gamers, which is a purely cynical move on the developer’s part.

It’s a shame, because there is fun to be had here, but at what cost for the full experience?

And with Mario Kart 8 Deluxe dropping a massive 48 courses in DLC, it’s obvious which title kart racers are going to put in pole position, despite it essentially being eight years old now. We guess that’s what makes a classic a classic.