It’s undeniable how cute puppy dogs are. And although yes, kittens are cute too, there have been more films featuring dogs and puppies over the years than ones featuring cats and kittens. This is due to the fact that cats have far more interesting things to do with their lives, and being told to sit on one position, then move to another, in front of cameras, just isn’t for them.

Dogs, on the other hand, are easily bribed with dog treats. They’re just not as fussy about the work they do, unlike cats, and will happily do all the tricks in the book for a Bonio or two. That said, even dogs have standards, as is clearly proven here, as the filmmakers had to resort to CGI as no dog in their right mind would give this woeful effort a second sniff. 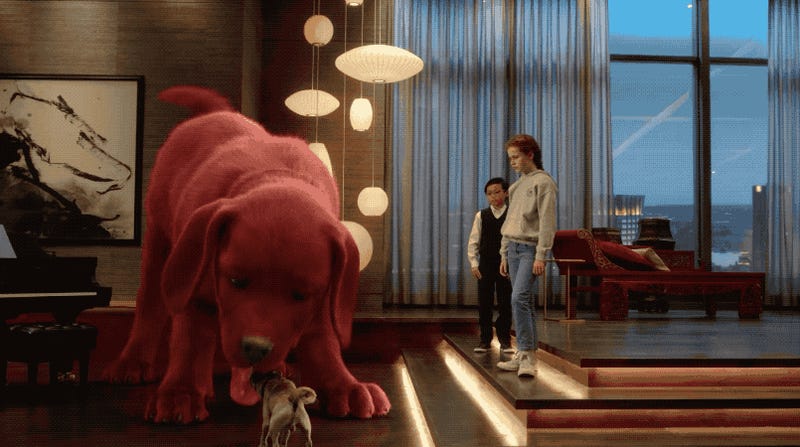 So what you're saying is there's supposed to be a big red dog in front of me? Where's my motivation for that?!

With her mum away on business, 11-year old Emily (Darby Camp) finds herself being looked after by her young uncle Casey (Jack Whitehall). She needs some cheering up, so she persuades Casey to take her to the park, where there’s an animal rescue tent, run by a curious English chap called Bridwell (John Cleese).

Although Emily isn’t really in the market for a pet – her mom and their no pets allowed apartment certainly aren’t – she ends up discovering a cute red puppy dog in her bag after school. She begs Casey to let her keep it for one night, which he agrees to. He kind of wishes that he hadn’t though, because in the morning the puppy has grown enormously in size.

It seems that Emily had wished for a big dog to take care of her, and woke up with exactly that. But with the dog so big, it’s going to be difficult to keep him a secret, especially from her mum. But will Bridwell be able to shrink him back down to normal puppy size if they find him? 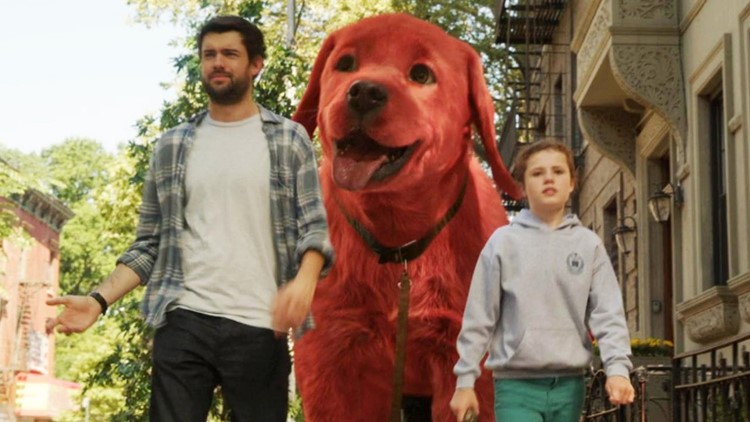 When I told my agent I want to work with a Hollywood big dog, this isn't what I meant.

So, there’s clearly a red puppy in the room with this film, and that’s the fact that it relies on CGI. That wouldn’t necessarily be an issue if the CG wasn’t so poor. Clifford, at whatever size he is during the film, doesn’t look real. You can kind of get away with it if he were a dinosaur or a monster of some kind, but everyone knows what dog looks like, and Clifford just looks fake.

You could probably get away with it if he had some personality, but this dog is a dud; everything about him is clichéd, and although his physical appearance is larger than life, his personality is far from it. It almost feels that all those concerned with the film have never been dog owners – or even worse, they’re cat owners.

Director Walt Becker does a terrible job throughout, making some really poor decisions. For one, as if having Jack Whitehall in it wasn’t bad enough, but for some bizarre reason, which is inexplicably explained in the film, his sister is British with a British accent, and although Whitehall’s character was born British, he was moved to the States at an early age. No doubt all these hoops were jumped through just so Whitehall could attempt a poor American accent throughout, which he does, very poor.

The only one coming out of this debacle with a modicum of credit is young Camp, who gives far more than the film deserves. Also, the film includes a number of eccentric characters, like a Russian neighbour and one-handed magician, all of whom deserved more screen time than they got.

If you really love puppies, then its recommended you head on over to YouTube where you can puppy yourself silly. As far as this film is concerned however, the best thing for it would be to have it put down, humanely of course, but this pooch really needs to visit the big farm in the sky, for all our sakes.