As far as big guns are concerned, they don't get much bigger than Call of Duty.

This latest instalment, the ninth in the series overall, and, as the name suggests, the second in the Black Ops franchise, has already had gamers in a camouflage lather for some time, but how does it fare compared to the rest of the series?

The single player campaign starts off promisingly enough, as you find yourself in an open area in Africa, about to get swamped by an angry mob. It's unusual for the series, as it's not particularly known for its wide open spaces. Needless to say it doesn't make it as a multi-player map.

It's just after this section that the single player begins to deteriorate. Part of the problem is that developers Treyarch have once again paid for the writing services of David S. Goyer. Goyer, who is credit for the stories of Nolan's Dark Knight trilogy, as well as writing next year's Man of Steel, also wrote the story for the first Black Ops game. It's fair to say he has a feel for the material and the series. His story for Black Ops II however, is just outrageously ambitious.

What he possibly loses sight of with this particular game is that it's not a film. The single campaign is a wretched mess comprising of far too much flashing back and forwards in the plot's timeline. In doing so, there just doesn't feel like there's a cohesive story here to follow. Sure we see some old faces, but the disruptive structure is one that is certainly too difficult to enjoy, particularly if you take it on in short gaming bursts.

Even if you devote more time to it (we finished the campaign in two sittings) there's no flow to the story. In the end you'll just feel resigned to thinking 'OK whatever, just give me stuff to shoot', which is a shame as that's what the multi-player is for. 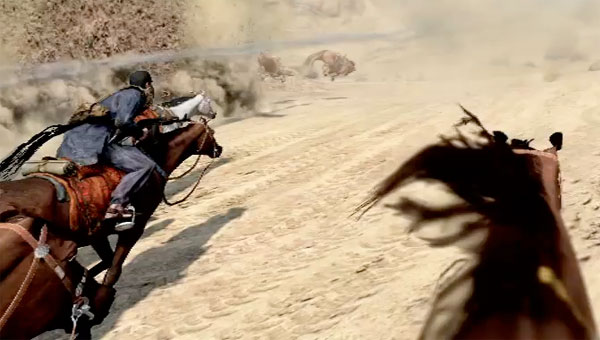 I don't know if I 've ever told you this but I'm a huge fan of My Little Pony, so it's great we've now got a section for that in the game!

Something else missing is the set pieces. There's usually one or two waiting to jump out at you from the bushes and take you pleasantly by surprise, but nothing. The closest it gets is in one level you'll find yourself riding around on a horse. No really, a horse in a COD game. A franchise low point if ever there is one.

In attempt to do something different, Treyarch have introduced Strike Force missions into the single player game. These levels play out like a strategy, role-playing game, where you have to command units and vehicles to specific areas of a map. Unfortunately for us, we didn't pay attention (losing the will to live in the instructions) and had no idea what we were doing. And although we saw a prompt somewhere along the way that we could review the instructions again, we couldn't find how, despite a valiant effort. These levels just passed us by as a consequence.

To a certain extent Treyarch should be commended for trying to introduce something a little different into the series. At the same time however, COD games are, first and foremost, First Person Shooters, and meddling with this formula just feels wrong. What next, a military dancing mini-game?

It's so wrong to say it, but it was a welcome relief to see the end of the single player game. It failed to surprise, engage and worse of all, entertain.

There was then, some trepidation going into the multiplayer game.

Five minutes into the first map and you realise that you're on familiar territory once again. All the bells and whistles you associated with COD multiplayer make an impressively loud statement. Whatever type of game you enjoy, you'll find it here. The maps are deliciously varied and should cater for every style of play. Yes, even you campers. They may be formulaic but they do a job, and do it well, so no complaints.

Those adorable zombies even make a return, getting their own campaign no less, which can be tackled by up to eight players online.

If you only buy a Call of Duty game for the online experience, Call of Duty: Black Ops II won't let you down. But compared to previous outings, the single player needs to take a time out and sit on the naughty step and think about what it's done so wrong. It's let itself down, the series down, but worse of all, those who actually look forward to playing through the single player campaign before tackling the multi-player; to them, the game has gone into stealth mode, sneaked up on them and stabbed them over and over in the back.

Treyarch need to be told that gamers really don't want a cinematic experience  that's what Blu-rays and DVDs are there for after all  we're just happy to settle for an action-packed gaming one; one we're not only used to with the COD franchise, but due to the high standards of previous efforts, now expect with every new iteration.

Multiplayer monkeys will be happy enough, but for lovers of the single campaign, Call of Duty: Black Ops II has really let the side down in a war that feels sadly lost.