It’s incredible to think how one hot (and cold) beverage could have such an impact on the world. The rise of the humble coffee bean in the last couple of decades has been nothing short of phenomenal, in western civilisation that is.

Believe it or not, coffee houses exited some time before the current crop of sanitised chains popped up, for example, coffee was the drink for Muslims between 1512 and 1524 in Mecca.

Now it’s difficult to walk a few steps in any direction without the whiff of a dark roasted bean getting up your nostrils.

Celebrating this love for the current coffee culture trend is this new game. 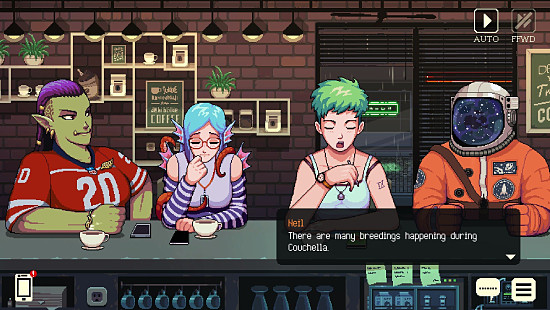 Netflix really wanted a different spin on their updated version of Cheers.

It’s 2020 and you’re the barista of a small coffee shop in Seattle. It’s an alternative universe, with it now commonplace for the likes of elves, dwarves, orcs and the like to socialise freely with mankind. And wouldn’t you know it, they all have a love for hot beverages like we do.

It’s a quaint little establishment, only open of a night time, and you appear to be the only member of staff. Customers are a mix of old and new; take Freya for instance, a regular with a love for triple espresso, who comes in every night, getting inspiration to write her first novel.

You serve, listen, observe, but mostly chew the breeze with anyone who seems up for a chat, which is pretty much everyone who walks through the door. And when the dawn arrives, the shop closes up, until darkness falls again and the coffee talk starts all over again.

Coffee Talk is less a game and more a caffeine-fuelled experience. There are no prizes to be won, no missions to embark on, you don’t even earn cash for the drinks you sell. In truth, there’s very little to do. The only physical exertion might come from pressing the controller button, over and over. And over. This activates the interaction with your customers, which ultimately just runs a whole heap of dialogue with no interaction whatsoever. 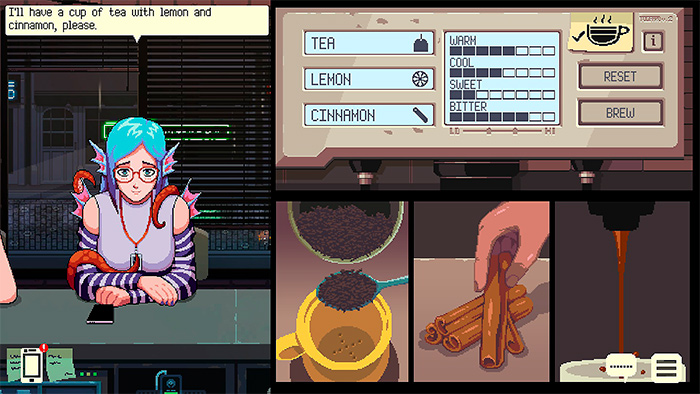 The only time you can be even remotely creative is in creating a pattern to put on some of the coffees, even then it’s restrictive.

This title feels more like the kind of thing you would find as an interactive installation in an art gallery than a game. Although visually the game is pleasingly retro, with a simplistic 16-bit look, it’s all terribly static, with very little movement of any kind on screen.

The driving force behind the entire game is the dialogue. Considering some of the curious characters that visit the cafe, some of it is quite entertaining. The majority of it however, attempts to keep conversations fairly straight-laced, involving various relationships, work issues they may have etc. After a while it becomes just like one of those classic conversations, you know the ones, with someone who more than anything, loves the sound of their own voice, who really doesn’t care what you have to say. Now imagine that’s a game you’ve paid for, for exactly the same experience.

It’s at this point that all you are required to do is keep pushing the button to refresh the dialogue. Ultimately, all you do is read. It’s probably safe to say that they aren’t the most life-changing prose either, so you just have to endure it.

At the very least it would have helped to have some multiple choice answers to give, in an attempt to sway the path of the story, but no. It remains belligerently linear.

It’s an intriguing concept, but it just isn’t developed nearly enough, with the gamer’s participation extremely limited. Because of that, it might not be your cup of tea.