If there’s one actor who is keen on keeping the period drama alive it’s Keira Knightley. For the majority of her career, she has been wearing corsets, jaunty hats and serious pouts, in various historical dramas. And doing very well as a result.

So much so, that it’s difficult to imagine Knightley in modern clothes, or films for that matter. There are vicious rumours circulating that she even has a Victorian bodice tattooed across her body to save time changing costumes.

Here she finds herself in France, at the turn of the 19th century, in a fabulous array of period costumes, starring as French author Gabrielle Colette. 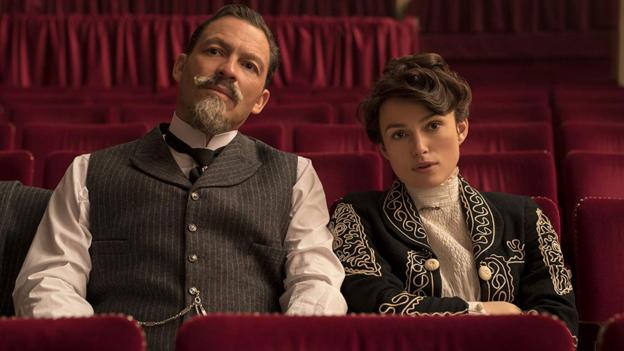 Hmmm, I think I preferred Thor Ragnarok, don't you?

Living in rural France with her parents is young Colette (Knightley). After meeting Willy (Dominic West), an old soldier chum of her father, she falls in love with him and he whisks her away to the bright lights of Paris.

There, he runs a creative factory, hiring writers to produce works of fiction for a public with an appetite for stories. All the work published however, goes out under his own name, so he takes all the credit.

With Willy’s outgoings – on such things as wine, women and gambling – amounting to more than his income, he soon finds himself in a financial bind. Colette suggests that she could help out on the writing front, which he agrees to. As it transpires, she’s pretty good at the old writing lark, and soon becomes the talk of Paris. Or she would have been if it wasn’t for the fact that Willy still insists on having her work published in his name. But with a new century comes fresh ideas and new approaches that Colette quickly embraces.

As you would expect, Knightley fits right at home in this time in history, and certainly looks the part. The relationship she forms with West’s character is warm and tender and the pair make a believable on-screen couple.

The script however, does them a disservice; although it has a modicum of charm, it sorely lacks passion, as well as a certain je ne sais quoi. English director Wash Westmoreland, who only has a handful of films to his name, shows he’s out of his depth with the period drama genre, as he fails to inject it with any sense of raw emotion that this real life story demands, and more to the point, deserves.

The role itself is bread and butter for Knightley, but with the right direction, it could have been something far more appetising.

Sadly then, despite the best efforts of its two leads, Colette is a name unlikely to linger long in the mind.