Color Out of Space

After directing 1990’s cult classic Hardware, director Richard Stanley looked as if he had a bright future ahead of him. And then The Island of Dr. Moreau happened. The 1996 film, starring none other than Marlon Brando and Val Kilmer was to be his ticket to the big time, but when the studio lost faith they fired him and replaced him with John Frankenheimer.

Since then, the South African born director, has helmed the odd documentary and video short, and that’s about it.

This film, based on a 1927 short story written by H.P. Lovecraft, is his first major feaure for quite some time. 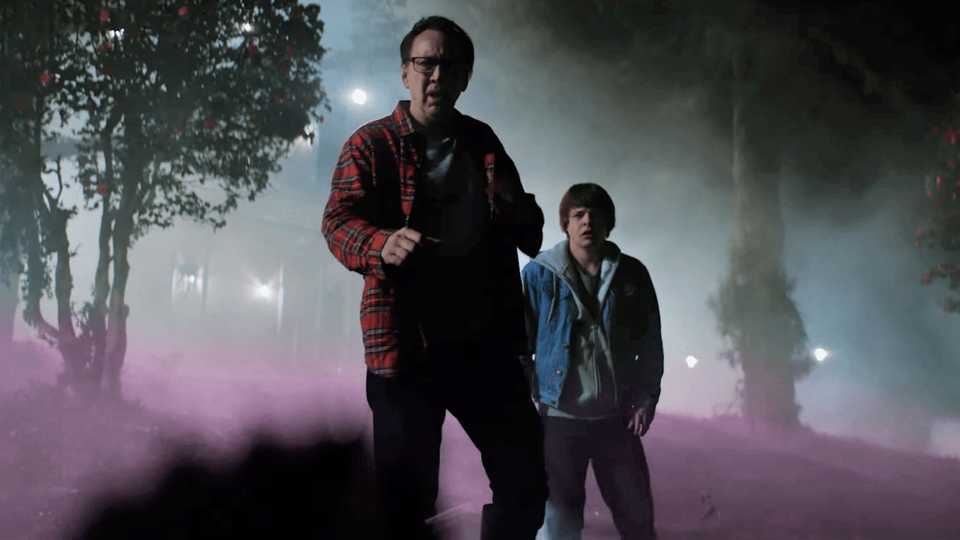 That's not our regular Uber driver, is it?

Living on the farm his father ran in Arkham back in the day is Nathan Gardner (Nicolas Cage), with his wife Theresa (Joely Richardson), teens Lavinia (Madeleine Arthur) and Benny (Brendan Meyer), and youngster Jack (Julian Hilliard).

One night, their remote home felt like it was under attack, when actually it was a huge rock from space that made its home on their front lawn. From that point, their lives were never going to be the same again.

I know Alan Titchmarsh said it would add character to the garden, but this is too much.

You would think that the only factor you would have to consider would be the return of this director to the big screen, but that’s not factoring in his lead Cage. To that end, they really have to be evaluated as separate entities.

The film itself is quite the spectacle. As Stanley is now based in Europe, the film representing an incident on US soil was shot entirely in Portugal. Ah the magic of film. It also relies heavily on special effects throughout, which it does an admirable job with.

When it comes to the narrative, it certainly has an independent film production vibe about it. This is by no means a slur, but it’s a safe bet that Stanley wouldn’t have gotten away with half of the stuff he did if this was a big Hollywood job.

The result is a trippy, colourful experience, with the bare bones of a sci-fi story attached. And what story there is certainly has a whiff of classics from the past, including The Thing, Invasion of the Body Snatchers and Poltergeist to name but a few. And although Stanley presents a visually impressive film, it is tainted by the déjà vu nature of it all.

And then there’s Cage.

For most actors, turning up a performance to eleven is a life’s dream; for Cage, eleven is his base setting. Once again, he enters the bonkers stratosphere with yet another unhinged character. Although Stanley is clearly happy with the result, there is a valid notion that Cage manages to put not only the rest of the cast in his shade, but the film itself. It’s a tricky trade off but one the director was apparently happy with.

Cage will continue to deliver performances in the borderline fourth dimension, such is his presence. There’s also enough here to warrant Stanley the opportunity for more work. Especially when you consider that the safe bet was to play it as safe as safe can be, but not Stanley, he certainly reached for the stars with this one – and beyond. The man has balls the size of meteors, and deserves at the very least, one more crack.