Comfort and joy: that's what Christmas is meant to be all about, right? At least it is in all those schmaltzy renditions of it that you see kicking around on the telly in the run up to the big event. Those that aren't veering wildly in the other direction, that is, such as the kinds of un-Christmassy spirit that's typically to be found knocking around Albert Square.

It's this kind of slightly less polished, less rose-tinted version of Christmas that India Knight presents us with in her latest offering, Comfort and Joy. Okay, it's not exactly bleak, and nobody gets physically hurt, but it's not your average tale of festive domestic bliss either. 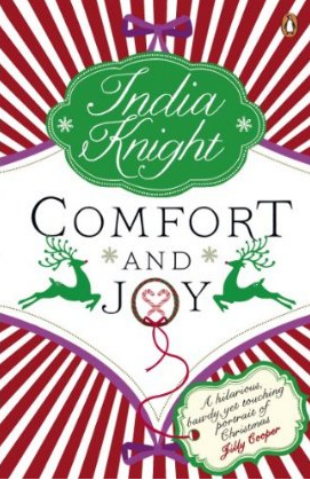 India Knight fans will have encountered the protagonist, Clara Hutt, before. In this book we get to share three successive Christmas Eves and Christmas Days with her and those of her family and friends she spends them with. When we first meet Clara she is married to her second husband, the lovely Sam, father of their daughter; she also has two teenage sons from a previous marriage, and remains on such good terms with her ex that he is always invited to the annual feast. The hustle and bustle of sorting out and performing the family Christmas rituals is mingled with all kinds of undercurrents and tensions between family members and friends, and as the years progress, we see what happens to this not very nuclear gathering.

India Knight has written suprisingly few novels (this will be her third novel) since her debut with My Life on a Plate over a decade ago, when we first encountered Clara Hutt, the protagonist of Comfort and Joy; this was written at a time that Bridget Jones fever seemed to have gripped the nation, and My Life on a Plate fitted right in to that zeitgeist, except it concerned a divorcee and mother of two. Knight has also written another novel, Don't You Want Me?, and balances these contributions to chick-lit with quite a bit of non-fiction about other stereotypically female concerns: shopping (The Shops, The Thrift Book), dieting and cooking (Neris and India's Idiot-Proof Diet and Neris and India's Idiot-Proof Diet Cookbook, both with Neris Thomas). She also writes a column for the Sunday Times. Reportedly, Comfort and Joy is semi-autobiographical.

On the plus side, the social situations that India Knight describes in this novel are excellently wrought. It's just a shame that it's really hard to like many of the characters in this book. Sure, there are elements of their characters that are tolerable, or, rarely, endearing and amusing, but for the most part, not so much. Perhaps in part it's down to the very middle class-ness of it all. Or, should we say, the kind of middle class-ness that is presented here. It's slightly ironic, since Clara's internal monologues often seem to focus on just how ridiculous the middle classes are. Suggestions of the semi-autobiographical nature of this book in turn suggest that this might all be a reflection of how India sees the world, but it may just as likely be Knight's parody of both the working and middle classes.

For example, we first meet Clara when she's doing a bit of last minute Christmas shopping in Oxford Street and its environs. She casually buys an ornament for her mother-in-law that costs a couple of hundred quid, before deciding that after such a hard day she shall treat herself to a champagne cocktail in The Connaught Hotel (a luxury, five star hotel in Mayfair) before returning home to get on with domestic festivities. This isn't the only time that the characters splash money about like it was water. In the economic straits that most of Britain - in fact, the world - currently finds itself in, it's a bold and perhaps questionable move to write such profligacy into this story. Perhaps we are meant to aspire to be like them, or maybe it's just meant to provide us with an opportunity for escapism? Unfortunately, it just produces a slight sense of resentment and lack of connection with the reader (at least, those of us without such a privileged existence).

There's also lots of middle class concern about class going on, and appropriate behaviour. Clara likes to moralise about lots of things, including her mother-in-law Pat, who attends each Christmas meal. Poor working class Pat, whose failure to be like everyone else at the festive gatherings is continually noted in Clara's thoughts. Then there's all the stuff about how to be a woman appropriately: Clara's friend Hope presents one way (a kind of glossy magazine version of a person, certainly bearing little relation to any women you might ever encounter in real life), and Clara and her siblings present another, but it's Clara's version of womanhood that is implicitly prized as the right way of going about things. Not necessarily in terms of serial divorce, but certainly in terms of what family should be, and the inevitability of children and domestic concerns muddled in with utterly unrealistic idealised romance. Whilst Clara's version of the ideal woman is less alien, it's still at least a bit of an affront.

Mercifully, it's a very snappy read. It's perfectly acceptable froth, which may well appeal to those who like a bit of escapism and align with the domestic politics presented on these pages. And it does have a very nice cover, but this is a prime example of why books should not be judged on them.