Despite having an iconic laugh and starring in some of the most successful films of the eighties, there is a generation that exists now that may have no idea who Eddie Murphy is.

Much of this is his own doing, as he pretty much had a ten year hiatus from acting after voicing Donkey for the fourth time in 2010 for the animated Shrek franchise.

But if his role in 2019’s Dolemite is My Name was to serve as a reminder that the comic actor was still very much alive and kicking, his return to playing Prince Akeem, first seen fairly on in his career in 1988’s Coming to America, may possibly be a nostalgic prick to the social conscience that funny man Murphy is back on familiar ground. 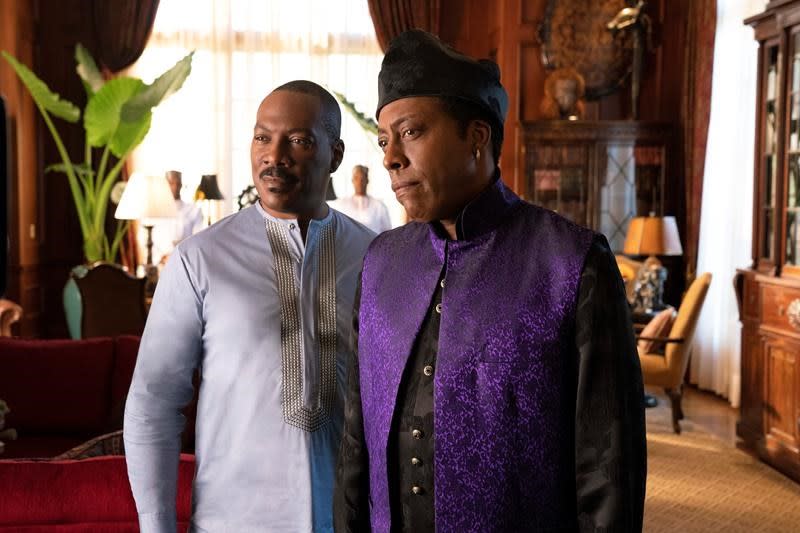 So it's something called 'streaming' you say?...

It’s been thirty years since Prince Akeem (Murphy) left his home land of Zamunda for his adventure in the US of A, and much has changed. He is now the proud father to three daughters, and he's also celebrating thirty years of marriage.

Putting a damper on the party atmosphere is the ill health of his father, King Jaffe Joffer (James Earl Jones); with little time left he reminds his son that he needs a male heir to the throne.

Someone who is more than aware of this fact is General Izzi (Wesley Snipes), who is keen to disrupt the current royal regime and take power for himself.

With the situation looking grim, his loyal follower Semmi (Arsenio Hall) recalls that he may have had a better time in New York than he remembers, and that it’s highly likely that he indeed does have a son, living in America.

On hearing this news, Akeem and Semmi return to the streets of Queens in the hope of not only finding a lost son, but in doing so, saving Zumunda from threats of war.

I have to be honest Eddie, i'm just happy to be out!

If anyone wasn’t aware of the comic talents of Eddie Murphy, this film isn’t the best introduction. Much like the original, which hasn’t dated well, Murphy once again plays Akeem as a fairly straight, well-meaning character. He has his charm, but don’t expect a barrage of one-liners. Replicating the original, this film sees Murphy and Hall reprise their other roles in the film, which has them fairly well disguised in make-up, to inject some much necessary humour. But again much like the original, their shtick is of such a poor quality that it’s unlikely to tickle any ribs.

Where it manages to succeed is in some warm performances; Leslie Jones in particular, who has some welcome edge to her role as Akeem’s one night stand, is a joy, as is the surprising return of Wesley Snipes, who clearly relishes playing the villain of the piece, and will hopefully signal more appearances to come.

And new arrival to the franchise Jermaine Fowler, playing Akeem’s illegitimate son Lavelle, holds his own well against the likes of Murphy and Hall, marking him down certainly as a talent worth watching.

Coming 2 America is not a comic masterpiece, not that anyone was expecting that, but it’s disappointing how lacking on the comedy front it is. Where it works is an affectionate follow-up to a now rather tired original, which certainly works on the nostalgia front. But it’s no great advert for the comic talents of Murphy.

Perhaps he expects more from his next announced project, as we all certainly will, as he’s set to return to yet another previous franchise, once again playing Axel Foley in Beverly Hills Cop 4. Hopefully it will more reminiscent of the quirky, quick-witted Murphy than this all too family friendly version that truly needn’t have come back at all.